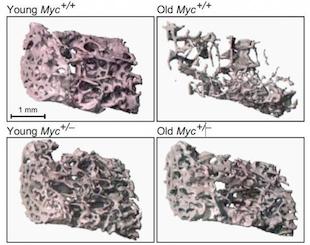 Mice lacking a copy of Myc develop less severe osteoarthritis with age than wild-type mice.SEDIVY LAB, BROWN UNIVERSITYFor many years, researchers have studied the transcription factor MYC, which promotes cell proliferation and is overexpressed in most human cancers. But MYC is also relevant to health for reasons beyond its cancer link. Compared to wild-type mice, those missing one copy of Myc live longer and suffer less severe aging-associated problems, according to research published today (January 22) in Cell.

Cancer biologist Linda Penn of the Ontario Cancer Institute and the University of Toronto in Canada, who was not involved in the study, noted that Myc’s apparent broad role in aging comes...

MYC is a “master regulator” that is required for cells to grow and proliferate, Penn explained. It is estimated to directly regulate at least 15 percent to 20 percent of the genome. Mice that lack both copies of Myc die as embryos.

At first, Sedivy and his colleagues genetically engineered mice to lack a copy of Myc because they thought this might increase cellular senescence, an aging-associated process in which cells cease to divide. To the researchers’ surprise, the mice did not show increased cell senescence but rather increased longevity compared with wild-type animals.

As expected given MYC’s role in cancer, the loss of one copy appeared to slow progress of the disease. But loss of a Myc copy also reduced hardening of heart muscle, osteoporosis, and age-related decline in immune function. Mice with reduced MYC displayed better motor function, showed reduced age-related changes in lipid metabolism, and had lower cholesterol than control mice. The engineered mice showed reduced levels of insulin growth factor-1. Reduction of this growth factor has also previously been shown to be associated with increased lifespan.

“It’s pretty clear that the [Myc-mutant] mice live longer for a variety of reasons, or at least if you look at their overall health, you see effects in a bunch of different organs,” said Sedivy.

As far as the researchers could tell, the Myc-mutant mice died of the same problems that felled the wild-type mice—mainly lymphoma. They just aged more slowly and died later.

Many anti-aging measures have tradeoffs. Mice given rapamycin, for instance, have increased cardiovascular disease risk and reduced immune function. In contrast, mice with reduced MYC showed no obvious health problems and were able to reproduce normally.

Joseph Baur, who studies the molecular mechanisms of aging at the University of Pennsylvania in Philadelphia and was not involved in the study, proposed next reducing MYC in specific tissues, which could help sort out which MYC-related health changes are linked to the longevity bump. David Harrison, who researches mechanisms of aging at the Jackson Laboratory in Bar Harbor, Maine, said he would like to see these experiments performed on a more heterogeneous population of mice, as Sevidy’s team used only one strain of inbred black six mice.

“Because it’s a single inbred strain and a single genotype, they don’t die of the range of problems that mice die of,” said Harrison. “They don’t represent the species, and that means you can really fool yourself by having a treatment that retards a specific problem that’s very important to that strain.”

Sedivy agreed that testing MYC reduction in a more heterogeneous population would be useful, but said that he expects “the overall phenotype will hold true, although it could of course get bigger or smaller.” Moreover, he noted, fruit flies missing a Myc copy have extended lifespan, indicating that this function may be highly conserved.

MYC’s widespread effects on health make it an attractive drug target, but Penn noted that cancer researchers have been trying to target MYC for many years with limited success. “Inhibiting MYC is a holy grail in cancer,” she said. Researchers are now focusing on reducing MYC’s function through indirect means, such as by inhibiting key protein-protein interactions. The results of this latest study on mice, she added, “gives . . . confidence that we’re moving in the right direction by developing a therapeutic to MYC for cancer.”