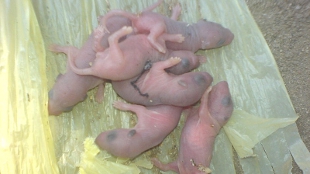 WIKIMEDIA, MUHAMMAD MAHDI KARIMMost children with spinal muscular atrophy (SMA) will never jump rope, play tag, or even walk because a genetic deletion will provoke the gradual destruction of their spinal motor neurons. By correcting this mutation in stem cells derived from patients, Italian scientists have successfully curbed the progression of the disease in a mouse model. The results, published last month (December 15) in Science Translational Medicine, suggest that SMA sufferers may one day serve as their own donors for neuron transplants to treat their disease, according to a report.

“[It] is a beautiful study of the potential for using induced pluripotent stem cells (iPSCs) to treat genetic diseases,” said Lisa Ellerby from Buck Institute for Research on Aging, who was not involved in the study but is currently investigating the use of the technique to treat Huntington’s disease (HD).

Adding gene correction to the equation could expand their scope to treat a wide array of inherited disorders, Ellerby said. “As the field demonstrates that patient cells can be genetically corrected, we are closer to using this new technology to either model the disease or develop therapies for human patients.”

SMA is the leading genetic cause of infant mortality, killing one of every 6,000 babies born worldwide. The disease arises when a person fails to inherit a partially deleted version of the survival motor neuron 1 (SMN1) gene, which regulates multiple cellular processes involved with RNA metabolism. There is no cure.

Somewhere along the evolutionary road to becoming human, the SMN1 gene was duplicated, resulting in SMN2, which can partially compensate for the dearth of SMN1 in SMA patients. Every SMA patient possesses an SMN2 gene. Those with multiple copies of SMN2 experience less severe SMA and typically survive into adulthood. But SMN1 and SMN2 are not identical: a single nucleotide difference impairs the pre-mRNA splicing of SMN2, such that its functional protein is produced at one-tenth the rate of the SMN1 protein.

Neurologist Giacomo Comi of the Univerity of Milan reasoned that if the single differing nucleotide of SMN2 were changed to mimic SMN1 in spinal neurons, perhaps the cells could survive. Rather than correct the SMN2 gene in endogenous SMA neurons, which may be dead or dying by the time the disease is recognized, Comi proposed replacing them entirely with iPSC transplants carrying a corrected copy of SMN2.

“The ideal therapeutic approach for SMA will be a combined strategy of molecular therapy to resolve the genetic defect and cell transplantation that can complementarily address signs of the disease,” said first author Stefania Corti of the University of Milan.

To accomplish this goal, Comi and his colleagues reprogrammed skin cells from SMA patients into iPSCs. The researchers then transfected the iPSCs with sequence-specific oligonucleotides that can repair genes with single base mutations. (In both steps, the researchers avoided using viral vectors because of the risks of tumor formation or harmful immune responses following transplantation.)  Finally, the genetically altered iPSC cells were differentiated into motor neurons and transplanted into mice that displayed symptoms of SMA.

The results suggest that the implanted neurons integrated into the spinal cord to alleviate motor dysfunction. Indeed, fluorescent histology revealed that the transplanted neurons formed neuromuscular junctions with muscle tissue near the spine. The implanted neurons also promoted the survival of the endogenous neurons still carrying the SMA mutation, indicating that the therapy provided neuroprotective benefits to the surrounding tissue as well. When grown in culture, corrected iPSC-derived neurons secreted more growth factors than uncorrected neurons, which may explain this transfer of vitality.

Of course, the research is very early stage, and many years of work will be needed to translate this success to the clinic, but “the implications are significant, not just for SMA disease, but also for similar neurodegenerative conditions like ALS and other neuromuscular diseases,” said Corti. “These data demonstrate the feasibility of generating patient-specific cells that are free of disease.”