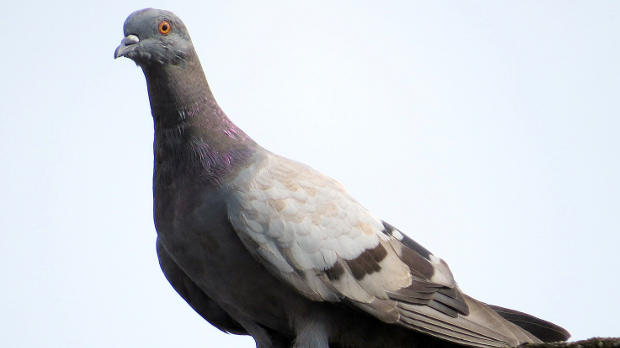 Researchers found the genes that code for the MagR and Cry proteins in the retinas of pigeons.WIKIMEDIA, TU7UHA variety of different animal species possess remarkable navigational abilities, using the Earth’s magnetic field to migrate thousands of miles every year or find their way home with minimal or no visual cues. But the biological mechanisms that underlie this magnetic sense have long been shrouded in mystery. Researchers in China may have found a tantalizing clue to the navigational phenomenon buried deep in the fruit fly genome. The team, led by biophysicist Can Xie of Peking University, discovered a polymer-like protein, dubbed MagR, and determined that it forms a complex with a photosensitive protein called Cry. The MagR/Cry protein complex, the researchers found, has a permanent magnetic moment, which means that it spontaneously aligns in the direction of external magnetic fields. The results were published today (November 16) in Nature...

“This is the only known protein complex that has a permanent magnetic moment,” said Peter Hore, a physical chemist at the University of Oxford, U.K., who was not involved in the research. “It’s a remarkable discovery.”

Xie and his colleagues called upon long-standing biochemical models that sought to explain animals’ magnetic sense to initiate the search for a physical magnetoreceptor. One of these involves molecules that incorporate oxides of iron in their structure and another involves Cry, which is known to produce radical pairs in some magnetic fields. “However, this only proved that Cry plays a critical role in the magnetoreptive biological pathways, not necessarily that it is the receptor,” Xie wrote in an email to The Scientist. “We believe there [are] such universal magnetosensing protein receptors in an organism, and we set out to find this missing link.”

The researchers performed whole-genome screens of Drosophila DNA to search for a protein that might partner with Cry and serve as that magnetoreceptor. “We predicted the existence of a multimeric magentosensing complex with the attributes of both Cry- and iron-based systems,” Xie wrote. “Amazingly, later on, our genome-wide screening and experiments showed this is real.”

Xie and his colleagues were “brave enough to go through the whole genome-wide search to hunt for this protein,” said James Chou, a biophysicist at Harvard Medical School. “Sometimes it works, sometimes you don’t get anything. Luckily, this time he got something big out of it.”

In 2012, after identifying MagR in Drosophila, Xie and his colleagues screened the genomes of several other animal species, finding genes for both Cry and MagR in virtually all of them, including in butterflies, pigeons, robins, rats, mole rats, sharks, turtles, and humans. “This protein is evolutionarily conserved across different classes of animals (from butterflies to pigeons, rats, and humans),” Xie wrote.

Determining that MagR and Cry were highly expressed and colocalized in the retinas of pigeons, Xie’s team focused on that species to conduct further experiments to ferret out the structure and behavior of the protein complex. Using biochemical copurification, electron microscopy, and cellular experiments in the presence of a magnetic field, the researchers constructed a rod-shaped model of the MagR/Cry complex, and suggested a potential mechanism for how the complex might work in situ to sense magnetism. “It is quite convincing that this complex may be the magnetoreceptor, at least for the organism they have fished it out from,” Chou said. “I think it’s a great step forward to open this whole mystery.”

Cry likely regulates the magnetic moment of the rod-shaped complex, while the iron-sulfur clusters in the MagR protein are probably what give rise to the permanent magnetic polarity of the structure. “The nanoscale biocompass has the tendency to align itself along geomagnetic field lines, and to obtain navigation cues from a geomagnetic field,” Xie wrote. “We propose that any disturbance of this alignment may be captured by connected cellular machinery such as the cytoskeleton or ion channels, which would channel information to the downstream neural system, forming the animal’s magnetic sense (or magnetic ‘vision’).”

Hore was cautious about saying that the newly modeled complex is absolutely responsible for magnetoreception in animals. “I don’t think I would say that its game-changing, but it is very interesting and will prompt a lot of experimental and theoretical work,” he said. “It may be very relevant to magnetoreception, it’s just too soon to know.”

“It may not be very accurate because this is really just a model,” Chou agreed, “but I think it’s a good effort, and it will stimulate follow-up work on the structure.”

Of course, there may well be additional biological components that play into giving animals a magnetic sense. Pigeons, for example, sense the inclination of the Earth’s magnetic field rather than the absolute direction of the field, Hore points out. The MagR/Cry complex, as described in the paper, would be capable of detecting the absolute direction or intensity of a field, not the inclination.

But beyond the clues into how animals sense the Earth’s magnetic field for navigational purposes, the discovery may yield new biochemical tools that could be used by other researchers. Chief among these applications is the potential to use the MagR/Cry complex along with controlled magnetic fields to control the behavior of cells or whole organisms. Such a development would be “sort of the magnetic version of optogenetics,” Cho said.

Xie agreed. “It may give rise to magnetogenetics,” he wrote. (See “Alleged Scoop Sours Magnetoreceptor Collaboration,” The Scientist, September 2015.)

The study also generates multiple questions about the biological components surrounding the protein complex and how they contribute to magnetic sensation. “This is just the tip of the iceberg,” Chou said. “This opens up a lot of future projects to unveil how this polarity, or alignment with the Earth’s magnetic field, can transmit signal, whether it’s a neural signal or one that regulates transcription.”

Xie said he thinks that while the “biocompass model” he and his colleagues proposed may serve as a universal mechanism for animal magnetoreception, there may be more magnetoreceptors to be discovered. Additionally, evolution enhanced the magnetic sense in some, especially migratory, species, which could have led to numerous variations on the theme. This may even extend to humans, he added. “I have a friend who has really good sense of directions, and he keep telling people that he can always know where is south, where is north, even to a new place he has never been,” Xie wrote in an email. “According to him, he felt there is a compass in his brain. I laughed, but now I guess I understand what he meant. . . . However, human’s sense of direction is very complicated. Magnetoreception may play some roles.”