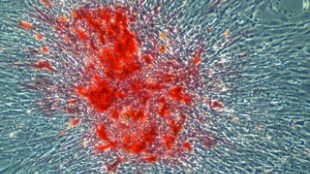 COURTESY RICARDO ROSSELLOThe ability to reprogram differentiated cells toward pluripotency has been a remarkable achievement, though its application has mostly been limited to mammals. Researchers published in eLife this week (September 3) evidence of induced pluripotency in cells from the non-mammalian model organisms zebra finch, chicken, zebrafish, and Drosophila. While the study’s authors cautioned that these cells were only partially reprogrammed, and therefore not induced pluripotent stem cells (iPSCs), lead author Ricardo Rossello said that “they have a slew of phenotypic characteristics of stem cells.”

The University of Puerto Rico’s Rossello and his colleagues, who study vocalization in songbirds, had been looking for a way to gather stem cells from the animals. “But nobody has really quite isolated stem cells” from the zebra finch, he said. So they decided to try and create them. In humans and other mammals, the overexpression of four genes can turn a skin...

Although homology to these genes was not great in the finch, Rossello said a portion of the genes’ proteins involved in transcriptional regulation, the DNA binding domains, were quite similar. So they went ahead and inserted a viral vector carrying the four mouse reprogramming factors into embryonic fibroblast cells from the songbird. The researchers thought they might observe the induction of some reprogramming pathways, Rossello said, “but it was quite surprising to see that using the same mammalian genes we were able to not only overexpress a panel of genes, we were also able to reproduce . . . most of the stem cell phenotype in our transformed cells, which is very powerful.”

The cells took on the clustered morphology of stem cells and expressed stem cell antigen-1. Rossello and his colleagues were able to show pluripotency in vitro by generating embryoid bodies and all three germ cell lineages. They went on to experiment in vivo, finding that the reprogrammed bird cells formed teratomas in a portion of mice whose testes were injected with the cells. Steve Stice, a University of Georgia professor who has induced pluripotency in quail, said, "short of making chimeric offspring, [the teratoma] is the most convincing assay you can perform."

Given their success with zebra finch, Rossello's group repeated the same reprogramming protocol with chicken and zebrafish fibroblasts, and achieved similar results. They also injected the reprogrammed chicken and fish cells into embryos to form chimeras, some of which were viable, although there was higher mortality than in controls. The injected cells eventually incorporated into various parts of the body, including muscle, intestines, skin, and brain in the chicken, and the stomach and head of the zebrafish.

Then, turning to an invertebrate, the researchers were able to form stem cell-like colonies of Drosophila S2 cells after transfecting them with the murine reprogramming factors. Thomas Zwaka, a stem cell researcher at Mount Sinai Hospital, was surprised by the team’s Drosophila results. “It’s interesting that you put transcription factors into something that shouldn’t respond at all because the system isn’t there, and something happens,” said Zwaka, who was not part of the study.

The cells have a number of limitations. “The first is probably the ability of the cells to be expanded and established as a cell line in vitro,” Bertrand Pain, a researcher at France’s INSERM, said in an email to The Scientist. Rossello's team could only passage the cells about a dozen times. “At some point we're held up at how these cells are self-renewing,” Rossello said.

The team is now working to optimize the procedure and to induce specific cell types. “Somatic reprogramming can be useful in various model species, as it can help to get stem cells and developmental tools for studying early developmental stages,” said Pain. There’s also the appealing possibility that if stem cells can be generated from any animal, they might be useful tools for conservation.

Zwaka added that even though the cells are not true iPSCs, the results are promising. “The fact that something happened suggests to me they are on the right track.”