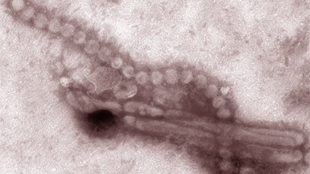 Influenza A (H7N9) viewed through an electron microscope.WIKIPEDIA, CYNTHIA S. GOLDSMITH AND THOMAS ROWEA group of 22 prominent influenza researchers have today (August 7) published a letter in both Nature and Science, stressing the need for a new wave of controversial studies on the H7N9 bird flu virus—so-called “gain-of-function” experiments that deliberately engineer mutant viruses to identify mutations that would make naturally occurring strains more transmissible or virulent in mammals.

This subtype of flu had no history of infecting humans until three cases were reported in China this March. Since then, H7N9 has infected at least 133 people and killed 43. Warmer summer weather and the recent closure of the country’s live bird markets have helped to contain the outbreak, but as colder months approach, researchers fear that the virus could re-emerge.

Last year, gain-of-function experiments on the H5N1 virus from two groups—led by Ron Fouchier from...

The H7N9 teams are keen to avoid repeating the same furore. “One of the main accusations last time around was that the flu community wasn’t being transparent about our work,” said Fouchier. “Now, we’re trying to be upfront about what needs to be done, how it could be done, and how we could do it safely.” Both Fouchier and Kawaoka are signatories of the new letter outlining the proposed H7N9 research.

Along with gain-of-function studies on transmissibility and virulence, researchers want to identify mutations that could influence the viruses’ effects on the immune system, their resistance to antiviral drugs, and their ability to hybridize with other flu strains.

In today’s letter, researchers emphasize that any plans for such studies would be reviewed by institutional biosafety committees, including experts from a wide variety of scientific disciplines, along with members of the public. Proposals would be subject to the stringent regulations that have been introduced since last year’s controversy, and would only be conducted in secure facilities. And in a related letter, representatives from the US Department of Health and Human Services (HHS) note that experiments that aim to produce more transmissible H7N9 viruses will have to pass an extra round of review.

Simon Wain-Hobson, a virologist from the Pasteur Institute in France, was critical of the move. “Since when do scientists try to get manifestos into Nature and Science?” he asked. “If they were going to do the human genome or go after the Higgs boson, I could understand that, but this is extraordinarily focused. They are ramming gain-of-function experiments down our throats against debate, and it’s not scientific.”

But Kawaoka defended the letter. “We’re making more of an effort to inform the public in advance about what we plan to do,” he said. “[Last time], people didn’t understand our intentions, and the regulations and conditions under which we operate. We hope that this letter will make things clearer and help people feel less anxious about this work.”

The need for gain-of-function experiments may be even greater than it was for H5N1 last year, given the sharp uptick of H7N9 cases this spring. Furthermore, some strains seem to easily develop resistance to frontline antiviral drugs. And unlike wild H5N1 viruses, circulating H7N9 viruses can spread through the air between ferrets, though not very effectively. “This virus already has some of the mutations that we had to engineer into H5N1 viruses to make them airborne,” said Fouchier.  “This potentially makes it more dangerous, and we need to see if a few more mutations could pull the trigger and make the virus even more airborne.”

But, Wain-Hobson said, “you can do experiments where you can probably get a pretty good idea of the mutations necessary for transmissibility without putting them in an infectious virus.” For example, researchers could mutate the receptor-binding part of the isolated hemagglutinin protein, which the virus uses to recognize host cells, then test the protein in vitro without incorporating it into an actual virus.

Michael Osterholm, director of the Center for Infectious Disease Research and Policy (CIDRAP) at the University of Minnesota and a vocal critic of last year’s decision to publish the H5N1 research, added that the flu community still has not rigorously weighed the risks and benefits of gain-of-function studies. “I support doing them for basic research purposes, and I have always maintained that Yoshi [Kawaoka] and Ron [Fouchier] could do this work safely,” he said. “But my concern is that publishing their data would allow labs around the world, which won’t adhere to the same safety requirements, to do the same.”

Osterholm added that the signatories of today’s letter have overstated the benefits of gain-of-function research, including the potential for developing better vaccines and antiviral drugs, or improving surveillance measures. “We still do H5N1 surveillance in the same way a year later,” he said.

Fouchier disagreed, noting that several groups are performing deep-sequencing studies on viral samples from patients in H5N1 outbreak areas, to see if the mutations that he and Kawaoka identified are cropping up.

More importantly, their experiments informed the quick response to H7N9, as early studies showed that these new viruses carried some key transmissibility-enhancing mutations identified in H5N1. “That is part of the reason why the Chinese authorities acted very rapidly and tried to stop further outbreaks [of H7N9] by closing markets,” said Fouchier. “Having knowledge that these mutations could increase transmissibility was a trigger for acting firmly this time around.”

“It is hard to say if the world is better prepared to combat a new influenza pandemic, but the problem is certainly on everyone’s radar screens,” said Paul Keim, a microbiologist at Northern Arizona University who chaired the government body that decided if Fouchier and Kawaoka’s H5N1 experiments were safe to publish. “This is good, and we can only hope that the public health efforts will be up to whatever nature, or man, throw at us. This is critical but also potentially dangerous research—that is still the same.”