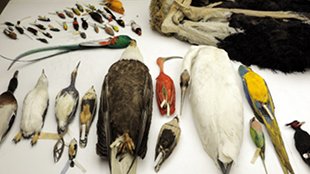 AAAS/CARLA SCHAFFERThe genomes of a staggering 45 bird species have been sequenced, analyzed, compared, and published today (December 11) in a collection of eight Science papers—with additional online at BioMed Central. This mammoth project brings the total number of completed avian genomes to just over 50, of which 48 have now been computationally aligned and evaluated to create the most accurate avian evolutionary tree to date.

“The relationships of modern birds have proved very hard to disentangle, and they are still much debated. The new work provides the first authoritative, consensual resolution of the problem,” wrote vertebrate paleontologist Mike Benton of the University of Bristol, who was not involved in the project, in an email to The Scientist. “The key to the new endeavor is that these studies are based on whole genome analyses, whereas previous phylogenomic efforts have used selected genes only.”

The most likely reason that branches...

But deciphering the tree is important. For one thing, said Jarvis, “it tells us something about speciation: how does it occur, and also what happens during massive climate changes, such as the mass extinction event. . . why some species survive and why some don’t.”

It also has relevance to human biology. Birds are model organisms for a number of human behaviors and conditions—For example, Jarvis compares vocal learning in birds and humans—so determining the genetic basis of such traits requires genetic history. “To have the phylogenetic relationships of these birds is really the framework to understand how these traits came to be,” said Loyola University biologist Sushma Reddy who was not involved in the project.

To figure out birds’ family history, “we thought, ‘Why don’t we use whole-genome data?’” said Guojie Zhang of the Beijing Genomics Institute and the University of Copenhagen, who co-led the project. But that turned out to be easier said than done.

First, it was necessary to choose species that represented the broadest possible diversity of birds, explained Zhang. Given the past difficulties of determining which classes certain birds belong to, however, the researchers had to pick not only representatives from the classes they knew, but also “those species whose classification was unresolved,” he said.

It wasn’t sequencing those 45 genomes that was difficult, added Zhang; it was the subsequent analysis. “We finished all the sequencing in six or seven months,” he noted, while processing the data took a further three and a half years. The team developed new algorithms to handle all the data. Altogether, the analysis required the equivalent of 400 years of single-processor computing time.

The results of this effort provide not only the most precise genetic history of birds to date, but also reveal why avian genomes tend to be small compared to those of other vertebrates: because they have lost a lot of genes and have far fewer repeat sequences. Furthermore, the data show that, compared with mammals, both the nucleotide sequences and the order of genes tend to be more conserved—perhaps because of the smaller number of repeat sequences, which would reduce the possibility of homologous recombination events.

Among the other papers released today, researchers report how birds came to lose their teeth, how their sex chromosomes evolved, and how avian genes involved in vocal learning have convergently evolved in distinct lineages of birds, as well as in humans.

But these genomes will yield additional information yet, said Reddy. “It’s a tremendous amount of effort that has produced an enormous amount of data that will be mined for years to come,” she said.