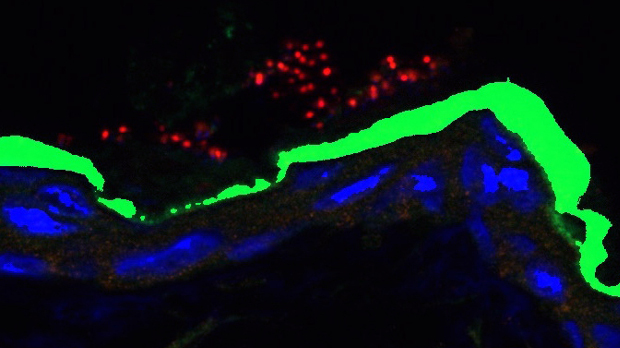 Fluorescent Staphylococcus epidermidis (red) on the skin (stratum corneum in green, epidermis in blue). UCSF, TIFFANY SCHARSCHIMDTThe skin is home to millions of commensal bacteria and immune cells. Yet how the skin microbiome is established—in particular, why the immune system does not attack these bacteria—has been little studied. Now, a team led by researchers at the University of California, San Francisco (UCSF), has shown that, to establish tolerance by the immune system, colonization of the skin by commensal bacteria occurs during the first few days after birth in mice. The team’s findings were published today (November 17) in Immunity.

“This is an elegant and well-executed study showing a regulatory T cell–mediated establishment of commensal-specific tolerance,” said Keisuke “Chris” Nagao of the National Cancer Institute in Bethesda, Maryland, who was not involved in the work.

“There is a fair amount known about how the innate immune system responds to...

One reason is the challenge of genetically manipulating bacterial species native to the skin. In the current study, Rosenblum, along with Tiffany Scharschmidt, an assistant professor of dermatology at UCSF, and their colleagues were able to overcome this hurdle, creating one of the first genetically engineered commensal skin microbes. The researchers introduced an antigen linked to a fluorescent protein, Epi-2W, into Staphylococcus epidermidis, which is found in abundance both on human and mouse skin. They could then precisely track the immune response to the tagged antigen in a mouse model.

When S. epidermidis was applied to the skin of adult mice not previously exposed to these bacteria, the animals developed an effector T-cell response but no overt skin inflammation, suggesting that the immune system registered the microbe as a mild pathogen. But exposure to the bug in adulthood was not enough to establish immune  tolerance of this species: if these same mice previously colonized with S. epidermidis were subsequently subjected to minor skin abrasions along with an application of S. epidermidis, their immune systems mounted responses that included inflammation and activation of T cells against the bacteria.

Because the microbiomes of the skin, gut, and other organs are established right after birth, the researchers reasoned that the immune system may set up tolerance to commensal bacteria only early in life. So the team repeated the same experiments using one-week-old mice. The researchers first exposed the skin of neonatal mice to S. epidermidis and then subsequently challenged these mice with the same bacteria plus skin abrasion four weeks later. The challenge resulted in a minimal inflammatory response and few activated T cells against the commensal bacteria, suggesting that the immune systems had established tolerance to the microbe.

“The authors . . . prove that the skin develops tolerance to S. epidermidis and, importantly, identified a window in early life when this happens,” said Julie Segre, a senior investigator of microbial genetics at National Human Genome Research Institute in Bethesda, who penned an accompanying editorial but was not involved in the research.

A closer analysis of the neonatal mice showed a parallel influx of regulatory T cells unique to the skin during the first two weeks after birth. This colonization of the skin by regulatory T cells—immune cells that dampen the responses of effector T cells—was required for tolerance to S. epidermidis, the researchers found.

“That there is an abrupt wave of [regulatory T cell] infiltration into neonatal skin occurs at a defined period and that this window dictates the achievement of commensal-specific tolerance is an important finding,” said Nagao.

“One major clinical implication of this study is giving antibiotics to a child in early neonatal life is likely a disservice because this will limit the amount and type of bacteria that is seen by the adaptive immune system and this could be linked to the development of autoimmune, inflammatory skin diseases later in life,” said Rosenblum.

A critical question, according to Nagao, is whether introduction of tolerance to commensal bacteria is possible following the closing of the developmental window described in the current study. This could “be important to explore how to induce commensal-specific tolerance in patients that have not acquired it,” he noted.

The researchers are now characterizing the wave of T regulatory cells to the skin after birth in humans. They are also working to understand whether these cells help maintain immune tolerance to commensal skin microbes.

“One of the great challenges of human microbiome projects is understanding which microbes cause infection and which are tolerated,” said Segre. “What we are learning is that there are critical time frames where the immune status is set that alter reactions to microbes later in life.”