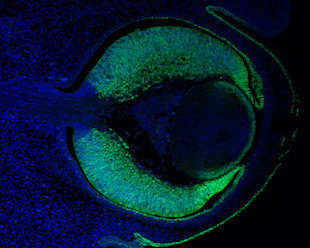 Mouse eyeWIKIMEDIA, VENTUS55Scientists have long known that the mammalian central nervous system (CNS) has a limited capacity to regenerate. But in a new study, researchers from Stanford University have shown that combining visual stimulation and chemical activation of the mammalian target of rapamycin (mTOR) led retinal ganglion cells in blind mice to regenerate, restoring partial vision. Further, the regenerated axons reconnected to their correct targets in the brain, the researchers reported today (July 11) in Nature Neuroscience.

This approach “offers a lot of hope, because it’s really the best regeneration anybody’s seen,” biologist Thomas Reh of the University of Washington in Seattle, who was not involved in the work, told The Scientist. “But it’s still just a small number of axons regenerating . . . and the amount of vision restored is not nearly what we would like to see” in humans, he added.

In the present study, Huberman and colleagues crushed the optic nerves of mice, and labeled the animals’ damaged retinal ganglion cells (RGCs) with a fluorescent dye. The researchers then exposed the now-blind mice to high-contrast visual stimulation consisting of moving bars on a screen every day for three weeks. A control group of mice was not exposed to this stimulation.

Huberman’s team injected another group of mice in one eye with a virus that boosted expression of a protein called ras homolog enriched in brain 1 (Rheb1), which activates the growth-promoting protein mTOR. Two weeks later, the researchers crushed the rodents’ optic nerves. The researchers labeled the cells three weeks later to measure how much the nerves had regenerated. Control groups received either no injection or injection of saline or a control virus.

Lastly, Huberman and colleagues exposed another group of mice to both the mTOR treatment and visual stimulation. The researchers stitched the mice’s non-injured eyes shut to encourage use of the injured eye.

These nerves also reconnected to their correct targets in the brain, Huberman’s team observed. “Before this study, we didn’t know if the neurons that regenerated were going to wander in the brain,” Huberman said.

The mice that received the dual treatment were able to regain limited vision, the researchers reported.  “This would be the equivalent of a human being completely blind versus moving through a room and being able to avoid large objects,” Huberman said.

The team is now testing the use of visual stimulation alone in humans, using virtual reality. Huberman and colleagues do not at this time plan to try the mTOR treatment in humans, as it is a riskier and more invasive procedure.

“This study offers great hope for therapy for [patients with optic nerve trauma], although much additional work must be done to translate these findings in animal models of human disease into treatment of human patients with blindness due to various types of optic nerve degeneration,” ophthalmology professor Marco Zarbin of Rutgers New Jersey Medical School, who was not involved in the work, wrote in an email to The Scientist.

To Zarbin’s mind, the study’s main limitations include the relatively small number of axons that were regenerated, that not all visual functions were restored, and the generalizability of the optic nerve injury model.

Meanwhile, Huberman is optimistic that retinal regeneration in humans is within reach. “Within the next one to five years, I think we’re going to see this problem tackled,” he said.