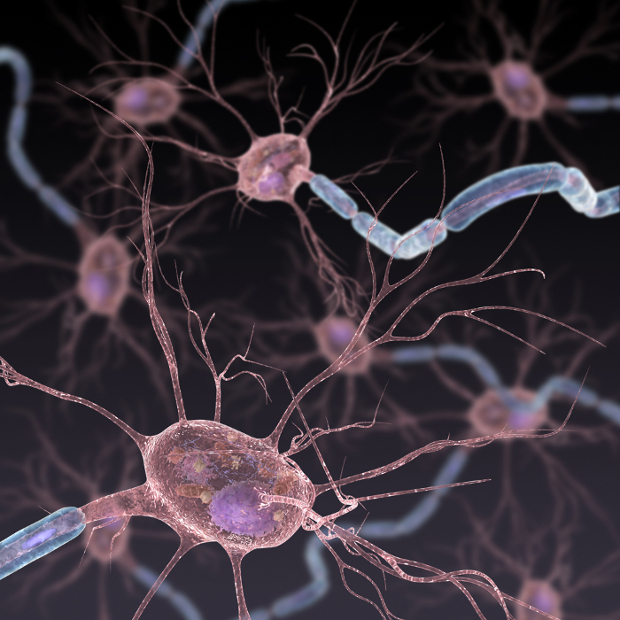 Through glucorticoid signaling, the protein FKBP51 can regulate the perception of chronic but not acute pain in mice, scientists from University College London (UCL) and their colleagues have found. Stress and chronic pain can go hand in hand, yet much of how stress and chronic pain–related signaling are connected remains a mystery. Previously shown to be involved in responses to stress in humans and rodents, FKBP51 now appears to be a factor common to both processes. The results, published today (February 10) in Science Translational Medicine, point to FKBP51 as a potential therapeutic target to alleviate long-term, persistent pain.

“[The work] suggests that stress signaling, through the secretion of glucocorticoids, is an important regulator of chronic pain,” wrote Jaclyn Schwarz, a neuroimmunologist at the University of Delaware who was...

“This study suggests that changes in the glucocorticoid system and FKBP51 in the neurons of the spinal cord contribute to the switch from analgesia to hyperalgesia—or hypersensitivity to pain—and to the development of chronic pain,” said Samuel McLean, an associate professor of emergency medicine and anesthesia at the University of North Carolina School of Medicine who was not involved in the work.

The glucocorticoid receptor is an important regulator of stress and inflammatory responses and FKBP51, an intracellular protein, is know to negatively regulate glucocorticoid signaling. Other groups, including McLean and colleagues, had previously shown that genetic variants of FKBP51 in humans result in higher levels of the protein, which can increase individuals’ vulnerability to pain after a trauma; these variants have also been associated with major depression and post-traumatic stress disorder (PTSD). FKBP51 levels increase in the brain when the glucocorticoid receptor is activated, when cortisol binds the receptor, which can prolong the stress response. During chronic pain, FKBP51 also appears to promote inflammation and pain sensitivity by regulating glucocorticoid receptor function.

UCL’s Sandrine Géranton and colleagues started with the observation that FKBP51 expression and protein levels increase in the dorsal horn of the spinal cord—where pain sensory neurons are clustered—when inflammation is induced in the ankle joint of mice or rats, a model of arthritic pain. “We wanted to test whether FKBP51 more than just correlated with a pain state but could actually regulate the development of chronic pain,” Géranton told The Scientist.

Using FKBP51 knockout mice, the team found that these animals could cope better with the long-term pain induced by arthritic joints and nerve damage compared to their wild-type counterparts. The researchers also knocked down FKBP51 with small interfering RNA (siRNA) in the spinal cord, several days before or after inducing the ankle inflammation. As with the knockout mice, knockdown animals also showed reduced pain sensitivity. In a third test, an inhibitor of FKBP51 called SAFit2, injected into the spinal canal, led to a similar reduction in pain sensitivity.

In each case, initial, early pain signaling in the spinal cord was not affected by the absence of FKBP51; FKBP51-knockout mice were also still able to perceive acute pain in the form of hot, cold, or mechanical stimuli, the researchers reported.

“We think that without FKBP51, the switch of the glucocorticoid receptor signaling from an anti-inflammatory to a proinflammatory role doesn’t happen, so the knockout mice feel less pain,” she added.

Stress hormones, including glucocorticoids, are released after an injury or trauma, serving to dampen inflammation. But when the injury or stress is persistent and the release of the hormones is prolonged, “this can have negative effects for the body, and these data support that idea,” said Schwarz.

“FKBP51 could be a potentially promising target for treating chronic pain in patients, particularly in those that have had some sort of physical trauma or injury, similar to the mouse model,” she added. “Given the terrible sometimes devastating side effects of opiate drugs, we need to consider additional avenues for treatment of chronic pain and this study makes a very strong case for FKBP51 as one of those targets.”