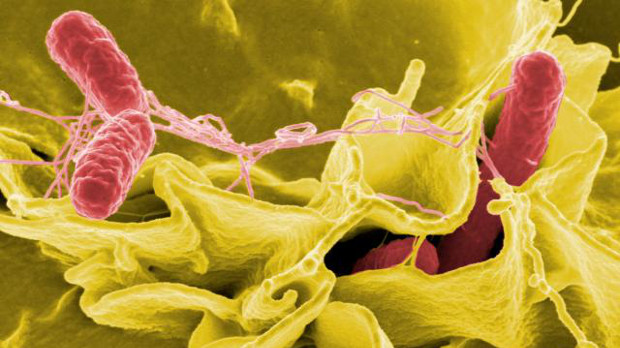 Salmonella invading an immune cellWIKIMEDIA, NIAIDA person’s gut is full of microbes—some beneficial, some not. Friend or foe, these bacteria must be prevented from accessing the rest of the body, where they could cause harm. In a paper published in Science today (November 12), researchers describe a barrier in mice between the intestine and the adjacent blood vessels that restricts the size of particles that can pass through. The team also shows, however, that Salmonella bacteria can suppress a chemical pathway critical to barrier function, enabling the bugs to invade.

“First of all, [the authors] are really defining and showing the existence of this barrier and in what way it resembles the brain [barrier],” said immunologist Bana Jabri of the University of Chicago who was not involved in the study. “Then they show a pathogen that apparently has evolved to modulate that barrier to its own favor.”

Aside from keeping the bacteria at bay, the epithelial cells’ job is to absorb digested food molecules. These nutrients enter the blood vessels adjacent to the intestine and ultimately reach the liver via the hepatic portal vein. What puzzled Maria Rescigno of the European Institute of Oncology in Milan, however, was why commensal bacteria, if they did beat the odds and enter the body, tended to end up in the nearby lymph nodes but were not found in the liver.

“Why would bacteria get to the lymphatics but not into the blood vessels which are very close to the epithelium?” she asked. And she began wondering: “is there something else other than just the epithelial barrier?”

There were indeed similarities. Endothelial cells of the blood-brain barrier have characteristically strong connections, called tight junctions and adherens junctions, and are surrounded by astrocytes—essential for barrier function. Endothelial cells of mouse intestinal blood vessels on the other hand had their own distinctive tight and adherens junctions, and were surrounded by enteric glial cells, “similar to the astrocytes” said Rescigno. These features also appeared to be present in human intestinal blood vessels, Rescigno’s team showed.

Furthermore the intestinal blood vessels of mice exhibited barrier function: while 4 kilodalton particles injected into the vessels could pass across the endothelium freely, 70 kilodalton particles could not. The blood-brain barrier by comparison prevents passage of any particles bigger than 500 Daltons.

Although this barrier appears to prevent most bacteria from entering the bloodstream, certain pathogenic species—including some Salmonella—are capable of establishing infections in the blood, liver and other organs. Rescigno and colleagues therefore investigated how Salmonella bacteria manage to squeeze through.

It turned out that infection of cultured endothelium with Salmonella suppressed the cells’ Wnt/β-catenin signaling pathway—known to be essential for blood-brain barrier function. Furthermore, the forced overexpression of β-catenin in endothelial cells of live mice, prevented Salmonella bacteria present in the animals’ guts from propagating around their bodies.

Prior to this study, the gut epithelium was considered the extent of the intestinal boundary, explained Macpherson, so “highlighting this vascular barrier is actually a rather important step forward.”

Depending on the species and serotype of Salmonella as well as on the health of the patient, some infections will lead to an acute illness limited to the gastrointestinal tract, while others will disseminate systemically and become chronic. If it were possible to develop treatments that close the vascular barrier, suggested Jabri, it might be possible to give such a drug alongside antibiotics. “In people who get acute infection one could address this barrier problem immediately,” she said, “so that [the infection] could not become chronic.”