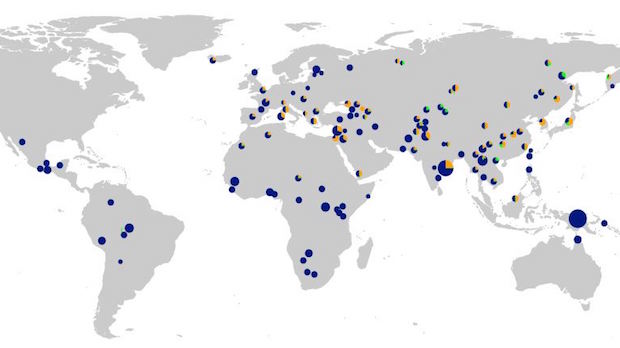 The proportion of Neanderthal-derived toll-like receptors in populations, with Neanderthal alleles in orange and green and non-archaic alleles in blue.DANNEMANN ET AL./AJHG Modern humans adopted innate immune genes responsible for recognizing invading microbes from Neanderthals and Denisovans, according to two studies published today (January 7) in The American Journal of Human Genetics. The two teams, based in France and Germany, independently concluded that humans picked up some versions of a cluster of toll-like receptors by interbreeding with archaic hominin relatives.

“Once humans came out of Africa and then encountered archaic species, they might also have encountered their pathogens,” said Rasmus Nielsen, an evolutionary biologist at the University of California, Berkeley, who was not involved in the studies. “There might have been pathogens that could affect Neanderthals and Denisovans that also could jump into modern humans.”

“At least partially, Neanderthals may have harbored already adaptive mutations, mutations that rendered...

Previous studies have shown that modern humans interbred with Neanderthals and Denisovans. For instance, Nielsen and his colleagues showed that humans who migrated to Tibet likely picked up an allele controlling blood hemoglobin concentration from local Denisovans, allowing them to adapt to living at high altitudes. Another paper indicated that humans had picked up major histocompatibility genes from Denisovans and Neanderthals.

The authors of the two new studies approached the topic of ancient human evolution from different directions. Quintana-Murci and his colleagues decided to do a broad survey of innate immune genes and their variability among present-day humans around the world, using sequence data gathered through the 1,000 Genomes Project. The team demonstrated that innate immune genes have been under stronger-than-average selective pressures. Some innate genes are highly conserved, with little tolerance for variability. Other protein-coding genes have picked up adaptive mutations, mostly occurring within the last 6,000 to 13,000 years after humans transitioned from a hunter-gatherer to agricultural society. The resulting increase in density of human settlements, cohabitation with animals, and increased exposure to sewage may have made humans easier targets for microbial disease, the researchers speculated.

Quintana-Murci and his colleagues also took advantage of a previously published map of areas of the human genome where Neanderthal genes are present, showing that innate immune genes are generally more likely to have been borrowed from Neanderthals than genes coding other types of proteins. Specifically, they noted that 126 innate immune genes in present-day Europeans, Asians, or both groups were among the top 5 percent of genes in the genome of each population most likely to have originated in Neanderthals. The cluster of toll-like receptor genes, encoding TLR 1, TLR 6, and TLR 10, both showed signs of having been borrowed from Neanderthals and having picked up adaptive mutations at various points in history.

Meanwhile, a group led by Janet Kelso of the Max Planck Institute for Evolutionary Anthropology in Leipzig, Germany, used both the same previously published Neanderthal introgression map that Quintana-Murci used and a second introgression map. The researchers searched for borrowed regions of the genome that were especially long and common in present-day humans, eventually zeroing in TLR6, TLR10, and TLR1. These receptors, which detect conserved microbial proteins such as flagellin, are all encoded along the same segment of DNA on chromosome four.

By looking at 1,000 Genomes Project data, Kelso and her colleagues were able to identify seven distinct versions of the TLR cluster. The researchers were able to match two of these versions to DNA from Neanderthals, and one version to DNA from Denisovans.

“There have been three potentially independent admixtures,” said Kelso. “We suspect it was two different Neanderthals and a Denisovan.”

Kelso and her colleagues then attempted to figure out the functional differences between the Neanderthal and Denisovan versions of the TLR cluster and the versions that likely originated with the modern humans who migrated from Africa to Europe and Asia later than these archaic hominids.

Kelso and her colleagues also did a survey of already-completed genome wide association studies, finding that present-day people who have the borrowed TLR clusters show lower levels of the bacterium Helicobacter pylori in their bloodstreams than people descended from humans that did not pick up TLR clusters from Neanderthals or Denisovans. People with the borrowed TLR clusters also tend to have elevated allergies to dust and pollen.

Kelso hypothesized that the Denisovan and Neanderthal TLR clusters may have strengthened the human immune systems against novel pathogens they encountered in their new homes in Europe and Asia. This may have yielded an immune system both skilled at fighting off pathogens and slightly oversensitive, leading to the allergies people carrying the archaic TLRs sometimes have today.

But it is less clear exactly how the immune system was strengthened, or what pathogens ancient humans were trying to fight. “What the gene expression results tell us is that there is some kind of a functional effect for introgression,” said Sri Sankararaman, a statistical geneticist at University of California, Los Angeles, who was not involved in the studies but did help make one of the preexisting introgression maps used in the papers. “That’s basically what it has established. Going from there to making a claim about its fitness effect is less obvious.”

And the reduced H. pylori prevalence associated with the borrowed TLR alleles is simply a sign that the variants are associated with altered immunity, not necessarily an indication that breeding with Neanderthals helped humans avoid this particular pathogen. “We may not have the pathogens around today that selection was acting in response to,” said Nielsen.

The studies help confirm that interbreeding between humans, Neanderthals, and Denisovans shaped human evolution, sometimes offering key advantages people of combined lineage. “The things that modern humans took away from the interbreeding with the Neanderthals were regions of the genome involved in adaptation to the environment,” said Kelso.