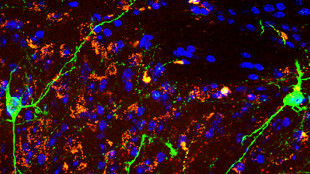 Lateral hypothalamus neurons (green) project to the ventral tegmental area in the mouse brainMIT, EDWARD NIEH, KARA PREBREY, AND KAY TYETwo independent research teams have defined populations of neurons in the hypothalamus that are responsible for food-as-reward stimulation, but are likely not necessary to spur eating for survival. Both groups published their findings today (January 29) in Cell.

“These are big papers that start to define the complexity and heterogeneity of [the hypothalamus] and the specific sets of neurons that can produce dramatic behavioral results,” said Ralph DiLeone, a neurobiologist at Yale University who was not involved in the work.

Using optogenetics, neuroscientist Garret Stuber at the University of North Carolina, Chapel Hill, and his colleagues found that activating GABAergic neurons within the lateral hypothalamus (LH) led mice to feed more frequently, while inhibiting the activity of these neurons motivated the mice to not eat in...

In vivo calcium imaging enables researchers to read neuronal activity on a larger scale—in specific regions of the brain, said DiLeone. The technique was developed by Mark Schnitzer’s laboratory at Stanford University. “Six years ago, we had none of these technologies—genetic ablation, optogenetics, in vivo imaging,” Paul Phillips, a neuroscientist at the University of Washington, told The Scientist. “It’s amazing to see the Stuber lab put these together so cleanly to answer important neuroscience questions.”

The neurons of the LH are diverse, and known to be involved in reward-related behaviors such as eating, drinking, and sex. But characterizing of the diverse subpopulations of neurons in this brain region has historically been a challenge. “We’ve had the electrical stimulation findings for more than 30 years now, but we didn’t know [which neurons] we were stimulating and whether the feeding-related neurons are from the LH or those that are just passing through until optogenetics techniques became available,” said Roy Wise, a neuroscientist at the National Institute on Drug Abuse who was not involved in the work.

“There is excitement in the neuroscience field for in vivo imaging because it allows us, for the first time, to study patterns of activity within molecularly defined subpopulations of neurons,” added Stuber.

In the second study, led by MIT neuroscientist Kay Tye, researchers identified two distinct neuronal populations in the circuit connecting the LH and the midbrain’s ventral tegmental area (VTA), which is known for its reward-processing function.  Whether neurons in these LH-VTA projections respond to sugar itself, or to the act of getting the sugar was not known, said study coauthor Edward Nieh, a graduate student in Tye’s laboratory. “Now we know that there are subpopulations of neurons responding to different cues—retrieving the [sugar] and to the [sugar] itself.”

Using a variation on an optogenetics technique, the team specifically targeted only the neurons in the LH that link to the VTA. Examining freely moving mice, the team found that the neurons connecting the LH to the VTA were activated during the act of seeking a sugar reward, independent of whether the reward was obtained. Inhibiting this circuit decreased only the compulsive sugar-seeking—not normal feeding behavior—in these mice. Stimulating only the GABAergic neurons in this circuit produced unusual behaviors: the animals gnawed at the floor or empty space in their cages when no food was present. And stimulating these neurons also resulted in classical compulsive behavior of overcoming a punishment—electric shocks—to get to the sugar reward, and increased compulsive overeating.

“We can reduce compulsive sucrose-seeking but not affect their normal feeding,” said Nieh. “This is important because for treating compulsive eating behavior, we only want to stop the unhealthy parts of eating and keep normal eating intact.”

“There is a clear application to feeding disorders and perhaps drug abuse and gambling because it may be a common pathway that activates these kinds of behaviors,” said Phillips.

In an e-mail to The Scientist, Tye said her lab is now working to better define a neuronal signature for craving that could be detected in real-time to develop interventions to stop compulsive overeating and other addictive behaviors before they start.