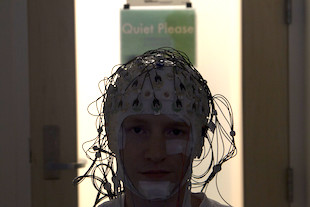 Wired for sleepBROWN UNIVERSITY, MICHAEL COHEAWhen it comes to bedding down in an unfamiliar place, the old adage about sleeping with one eye open may not be that far from the truth. New research helps explain this “first-night effect,” finding that one brain hemisphere remains more active than the other, researchers at Brown University and their colleagues reported today (April 21) in Current Biology.

“It’s an interesting finding,” Steven Stufflebeam, a neuroradiologist at Harvard Medical School and Massachusetts General Hospital, told The Scientist. “They found . . . one hemisphere of the brain was in a more vigilant state during the first night of sleep,” said Stufflebeam, who was not involved in the research.

The first night effect, which explains why people take longer to fall asleep and have poorer sleep quality the first night in a new place, has been well documented in...

“Researchers noticed the first-night effect for a long time, but we didn’t know what was going on in the brain,” study coauthor Masako Tamaki of Brown told The Scientist.

To find out, Tamaki and colleagues monitored the brain activity and sleep quality of 35 volunteers who spent two nights sleeping in their lab. They used a novel brain imaging technique that combines magnetoencephalography (MEG), structural MRI, and polysomnography—including electroencephalogram (EEG) signals, eye and muscle movements, and heart rate.

The researchers focused on a type of sleep called slow-wave activity, which measures the depth of sleep, as opposed to rapid eye movement (REM) sleep.

What they found was that the left hemispheres of the volunteers’ brains lit up more compared with the right one during their first night sleeping in the lab, but not on the second. The increased activity was located in a brain circuit called the default mode network, which is most active when a person is awake and resting.

In a second experiment with a different group of volunteers, the researchers played regular beeping sounds throughout the night, with high-pitched “deviant” beeps thrown in at odd intervals. They found that the brain’s response to the deviant sounds was again greater in the left hemisphere compared to the right one, but only during the first night. The left hemisphere also experienced more frequent “arousals,” or rapid shifts in EEG signals, after hearing the unexpected sounds.

The team did a final experiment in which a new group of volunteers heard sounds while they slept, except this time, they were instructed to tap their fingers lightly if they were awoken by the sound. More of the volunteers awoke—and faster—on the first night after hearing sounds in their right ear (which primarily activates the left brain hemisphere) than in their left ear.

Taken together, the results suggest that the left hemisphere stays more active on the first night of sleep in an unfamiliar setting. The researchers speculate that the first-night effect may be a protective mechanism that keeps the brain alert to possible dangers.

“This may be a very general phenomenon,” Jerome Siegel, a professor of psychiatry and biobehavioral sciences at the University of California, Los Angeles, who did not take part in the work, wrote in an email to The Scientist. Siegel and colleagues have seen this brain asymmetry during sleep in fur seals, dolphins, and beluga whales. “Sleep is only adaptive if it doesn’t produce risks that outweigh its benefits,” he added. (See “Who Sleeps?” The Scientist, March 2015.)

“I liked the overall concept,” said Jyrki Ahveninen, a professor of radiology at Harvard Medical School and Massachusetts General Hospital who was also not involved in the study. “The authors used an imaging method which provides certain significant advances in comparison to the prevailing human neuroimaging method, fMRI, which is very noisy and would likely affect the sleep quality much more than the present methods,” he wrote in an email to The Scientist.

Going forward, Tamaki and colleagues intend to study how the first-night effect relates to types of learning that are thought to be enhanced by sleep.