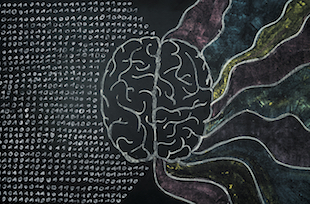 ISTOCK PHOTO, MARTINWIMMERThe human brain may wind down when asleep, but it doesn’t lose all responsiveness. Researchers from the École Normale Supérieure in Paris and their colleagues recently used electroencephalography (EEG) to monitor the brains of volunteers listening to recordings of spoken words, which they were asked to classify as either objects or animals. Participants were able to classify words during light non-REM (NREM) sleep, but not during either deep NREM sleep or REM sleep, according to a study published today (June 14) in The Journal of Neuroscience.

“With an elegant experimental design and sophisticated analyses of neural activity, [the authors] demonstrate the extent to which the sleeping brain is able to process sensory information, depending on sleep depth [or] stage,” Thomas Schreiner of the University of Fribourg in Switzerland, who was not involved in the study, wrote in an email to The Scientist.

During sleep, the brain...

“When we fall asleep, it’s pretty similar to a coma because we lose consciousness of our self and of the [outside] world,” study coauthor Thomas Andrillon, a neuroscientist at the École Normale Supérieure, told The Scientist. The question was “whether the brain could still monitor what was going on around, just to be sure the environment was still safe,” he added.

The present study followed on a 2014 study, in which the researchers performed similar assessments while participants took daytime naps. As part of that project, Andrillon and colleagues had people listen to spoken words in French and push a button with their left or right hand to indicate if the word was an object or animal, respectively, as the volunteers fell asleep. Meanwhile, the researchers measured the participants’ EEG brain activity looking for evidence that the motor cortices were preparing to make button-pushing movements.

For the present study, in which participants remained in the lab overnight, the researchers divided the sleep into three stages: REM, light NREM, and deep NREM. During REM sleep, the volunteers continued to mentally prepare finger movements during the word task as if they were awake, but only if they had encountered and categorized the words previously. During light NREM, the participants still showed motor preparation no matter whether the words were novel or had been presented before. And in deep NREM, the participants did not show any brain activity associated with button-pushing, Andrillon and colleagues found. The findings are in line with those of previous behavioral studies.

The researchers proposed mechanisms by which sensory information might be gated during REM and deep NREM sleep. In the former, information from the outside world may compete with (internally generated) dreams; in the latter, the brain experiences waves of hypersynchrony, in which “hundreds of thousands of neurons are going silent at the same time,” preventing the brain from processing sensory information, Andrillon explained.

“Andrillon [and colleagues] confirm their previous results showing that a complex processing of external information—semantic integration and task-related motor preparation—is possible in light NREM sleep,” Mélanie Strauss, a neurologist at the Hôtel-Dieu hospital in Paris who was not involved in the study, wrote in an email to The Scientist. “But they also demonstrate that this processing is disrupted in other sleep stages, in deep NREM sleep and, maybe more surprisingly, in REM sleep,” she added.

The idea that the brain can selectively process information from the outside world during sleep is not new. A recent study found that during the first night spent in a new environment, one brain hemisphere remains active to “keep watch.”

“When you sleep, if there is relevant information in the environment, it can modulate vigilance,” Andrillon said.