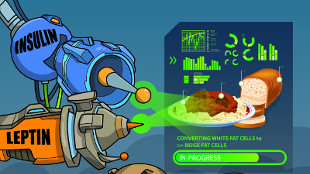 JUSTIN HEWLETT, MNHS MULTIMEDIA, MONASH UNIVERSITYEver since energy-storing white fat has been shown to convert to metabolically active beige fat, through a process called browning, scientists have been trying to understand how this switch occurs. The immune system has been shown to contribute to activation of brown fat cells. Now, researchers from Monash University in Australia and their colleagues have shown that insulin and leptin—two hormones that regulate glucose metabolism and satiety and hunger cues—activate “satiety” neurons in the mouse hypothalamus to promote the conversion of white fat to beige. The results are published today (January 15) in Cell.

Hypothalamic appetite-suppressing proopiomelanocortin (POMC) neurons are known to relay the satiety signals in the bloodstream to other parts of the brain and other tissues to promote energy balance. “What is new here is that one way that these neurons promote calorie-burning is to stimulate the browning of white...

“The authors show that [insulin and leptin] directly interact in the brain to produce nervous-system signaling both to white and brown adipose tissue,” said Jan Nedergaard, a professor of physiology at Stockholm University who also was not involved in the study. “This is a nice demonstration of how the acute and chronic energy status talks to the thermogenic tissues.”

Although the differences between beige and brown fat are still being defined, the former is currently considered a metabolically active fat—which converts the energy of triglycerides into heat—nestled within white fat tissue. Because of their energy-burning properties, brown and beige fat are considered superior to white fat, so understanding how white fat can be browned is a key research question. Exposure to cold can promote the browning of white fat, but the ability of insulin and leptin to act in synergy to signal to the brain to promote browning was not known before this study, according to author Tony Tiganis, a biochemist at Monash.

White fat cells steadily produce leptin, while insulin is produced by cells of the pancreas in response to a surge of glucose into the blood. Both hormones are known to signal to the brain to regulate satiety and body weight. To explore the connection between this energy expenditure control system and fat tissue, Garron Dodd, a postdoctoral fellow in Tiganis’s laboratory, and his colleagues deleted one or both of two phosphatase enzymes in murine POMC neurons. These phosphatase enzymes were previously known to act in the hypothalamus to regulate both glucose metabolism and body weight, each regulating either leptin or insulin signaling. When both phosphatases were deleted, mice had less white fat tissue and increased insulin and leptin signaling.

“These [phosphatase enzymes] work in POMC neurons by acting as ‘dimmer switches,’ controlling the sensitivity of leptin and insulin receptors to their endogenous ligands,” Dodd told The Scientist in an e-mail. The double knockout mice also had an increase in beige fat and more active heat-generating brown fat. When fed a high-fat diet, unlike either the single knockout or wild-type mice, the double knockout mice did not gain weight, suggesting that leptin and insulin signaling to POMC neurons is important for controlling body weight and fat metabolism.

The researchers also infused leptin and insulin directly into the hypothalami of wild-type mice, which promoted the browning of white fat. But when these hormones were infused but the neuronal connections between the white fat and the brain were physically severed, browning was prevented. Moreover, hormone infusion and cutting the neuronal connection to only a single fat pad resulted in browning only in the fat pad that maintained signaling ties to the brain. “This really told us that direct innervation from the brain is necessary and that these hormones are acting together to regulate energy expenditure,” said Tiganis.

These results are “really exciting as, perhaps, resistance to the actions of leptin and insulin in POMC neurons is a key feature underlying obesity in people,” said Dodd.

Another set of neurons in the hypothalamus, the agouti-related protein expressing (AgRP) or “hunger” neurons, are activated by hunger signals and promote energy storage. Along with Tamas Horvath, Yale’s Yang recently showed that fasting activates AgRP neurons that then suppress the browning of white fat. “These two stories are complimentary, providing a bigger picture: that the hunger and satiety neurons control browning of fat depending on the body’s energy state,” said Yang. Activation of POMC neurons during caloric intake protects against diet-induced obesity while activation of AgRP neurons tells the body to store energy during fasting.

Whether these results hold up in humans has yet to be explored. Expression of the two phosphatases in the hypothalamus is known to be higher in obese people, but it is not clear whether this suppresses the browning of white fat.

“One of the next big questions is whether this increased expression and prevention of insulin plus leptin signaling, and conversion of white to brown fat perturbs energy balance and promotes obesity,” said Tiganis. Another, said Dodd, is whether other parts of the brain are involved in signaling to and from adipose tissue.