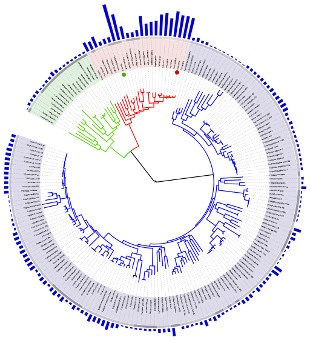 Tree of Life based on completely sequenced genomesWIKIMEDIA, GRINGERScientists have created a new tree of life showing the relationships among all known living things, which taxonomists typically classify into one of three domains: eukaryotes, bacteria, and archaea. One of this new tree’s largest branches consists of bacteria that are essentially new to science, according to a study published today (April 11) in Nature Microbiology.

“The significant feature [of the tree] is so many of the major lineages have no isolated representatives”—that is, that none of their species have been cultured individually in the laboratory, said Jillian Banfield of the University of California, Berkeley, who led the work. “Much of the world around us is populated by organisms we know nothing about,” she added.

“It’s a great step forward,” said the Florida Museum of Natural History’s Doug Soltis, who was not involved in the work. Soltis...

The tree of life has developed “in jumps and fits,” explained University of California, Davis, evolutionary biologist Jonathan Eisen, who was not involved in the work but who commented on the manuscript before it was submitted and has previously collaborated with Banfield. The tree’s iterations have included the eukaryote-prokaryote dichotomy, the “five kingdoms” system, and the three-domain system, outlined by microbiologist Carl Woese in a landmark 1987 paper that “[many scientists], myself included, literally carried around everywhere,” Eisen recalled.

“My feeling is people are going to do the same thing with this paper,” said Eisen. “They’re going to print out these trees and put them on their door.”

The new tree relies on publicly available genome sequence data supplemented by the researchers’ own metagenomic sequencing of more than 1,000 microbial species whose genomes were not previously available. These species were sampled from various far-flung environments, including an aquifer, and the mouths of two dolphins. To determine relatedness and build the tree, the researchers compared the amino acid sequences of 16 ribosomal proteins.

The tree’s mystery branch, called the Candidate Phyla Radiation (CPR), is huge: about a third of the genetic diversity within the entire tree—as much as that of eukaryotes and archaea combined—comes from the CPR, study coauthor Laura Hug, a former member of the Banfield lab who is now at the University of Waterloo in Canada, told The Scientist in an email. Currently, the entire group has only a single isolated representative, Banfield said.

The CPR’s members share distinctive biological features. “To date it would appear that all of these organisms [within the CPR] have symbiotic lifestyles or are at least dependent on other organisms for the vast majority of their basic metabolic resources,” said Banfield.

Many genes isolated from CPR bacteria are of unknown function, so the tree may represent “a rich source of information for biotechnology,” Banfield said.

Along those lines, Eisen noted, one benefit of these phylogenetic trees is that they can aid in the search for novel biological functions: “One of the best ways to discover a new function is to go to an organism that is distantly related from anything else.”