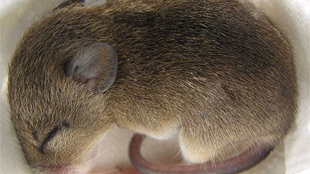 FLICKR, E3000Mammalian mothers set their offspring up for life by feeding them milk. But breast milk is more than a source of nutrients; according to a new study, it also gives mothers a way of preparing their young for challenges ahead.

Bingfang Liu from Weill Cornell Medical College found that if female mice lack a protein called TNF, they produce breast milk with low levels of cytokines—chemicals involved in triggering an immune response. If pups drink this cytokine-poor milk, they develop a bigger hippocampus—a part of the brain involved in spatial memory. As a result, they become better at navigating mazes and remembering the locations of objects, even into adulthood.

“We think TNF could be an environmental sensor, because it’s part of the immune system. It responds to conditions like stress or food supply,” said Miklos Toth, who led the study. “It allows the mother to match her...

Decades of studies have shown that TNF (or tumor necrosis factor α) is a critical part of the immune system, and high levels of it help to fight off infections. More recently, scientists have shown that low levels of the protein are also found in the brain.

To see if these “ambient levels” of TNF affect learning and memory, Toth’s team engineered mice that lack the protein entirely. At first, the TNF-deficient mice seemed normal. But the team soon noticed that their offspring had better spatial memories. They were better at learning the location of a submerged platform in a watery maze, and at learning to stop moving when they entered a specific space or setting.

“We can wipe out TNF from the offspring and it has zero effect on their memory,” said Toth. “If you do it to the mother, it has pretty profound effects on the offspring. That was totally unexpected.”

By switching the pups around after birth, the team found that mice develop better memories if they are raised by TNF-free mothers, even if they are born to normal ones. This suggested that the effect was not due to exposures in the womb.

Maternal care was not a factor either, since mothers without TNF care no differently for their pups than mothers with the protein. That left one option—milk. “We were happy at that point. Once you know it’s the milk, you can ask what’s in it, and nail down the molecular players,” said Toth. The team showed that the milk of TNF-free mice contains unusually low levels of at least five chemokines.

When the pups imbibed this altered milk, they produced more neurons in their hippocampi, with more connections per cell and stronger activity of synaptic genes. This seemed the basis of their better memories. The team confirmed this by feeding the youngsters with a cocktail of the five missing chemokines, which reduced the growth of their hippocampal neurons and left them with normal memories.

“We tried to work out this pathway step by step, and put a lot of emphasis in linking each step in a causative way,” said Toth.

In tough environments where mothers are stressed, their TNF levels fall. As a result, their offspring end up with better spatial memories, which might give them an edge in the search for scarce resources. “It’s adaptive programming,” said Toth, which matters, since good memories soak up a lot of energy and may be detrimental if they are not needed. “We now want to try to modify conditions in our lab to mimic environmental stress and see how this whole pathway responds,” he added.

For now, it is not clear if the same pathway exists in humans. “The response is very evolutionary conserved,” says Toth. “It’s more a question of timing.” Mice develop faster than humans do, and their young are born at an earlier stage. If TNF does affect human memory, then it probably does so in utero, rather than through breast milk.

Toth noted that people with inflammatory bowel disease or rheumatoid arthritis often take TNF-inhibiting drugs. Even pregnant people are allowed to take them, which might have knock-on effects in the next generation.

But Roberto Garofalo, an immunologist at the University of Texas Medical Branch noted that human milk contains TNF along with several other chemokines. “But there is some evidence that this TNF may be biologically inactive because milk contains soluble TNF receptors that inactivate it,” he added in an email. “The endpoint in humans would be a sort of TNF inhibition, similar to what they obtain in genetically-deficient mice or with pharmacologic inhibitors.”