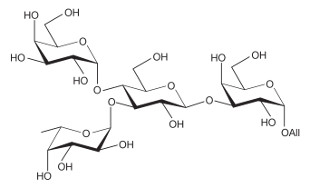 Branched oligosaccharideWIKIMEDIA, CCOSTELLGut microbes isolated from human infants that showed stunted growth can boost growth in two animal models of malnutrition with the addition of certain breast milk–derived sugars to the animals’ diets, researchers reported. The study, published today (February 18) in Cell, identifies oligosaccharides in mammalian breast milk that appear critical for the maturation of the infant gut microbiome.

“This is an excellent study that highlights the importance of [mammalian] milk oligosaccharides for infant growth and development,” said Lars Bode of the University of California, San Diego, who was not involved in the work.

The results could inform “work to develop tools and levers to nudge the gut microbiota into the right direction to get durable effects on infant health,” said study coauthor David Mills from the University of California, Davis.

Mills, along with Washington University School of Medicine in St. Louis’s Jeffrey Gordon and...

“We were interested in milk oligosaccharides because they are largely indigestible by us but are broken down by the microorganisms of our gut microbiota,” study coauthor Mark Charbonneau of Washington University told The Scientist. Using mass spectrometry, the team found that both sialylated and fucosylated oligosaccharides were more abundant in the breast milk of mothers with healthy infants compared to the breast milk of those whose infants showed stunted growth.

Because a previous study of Bangladeshi infants and toddlers led by Gordon’s lab found that the gut microbiomes of malnourished children were underdeveloped compared to those of their healthy counterparts, the team sought to test whether adding milk oligosaccharides to the diets of animal models of malnutrition could restore gut microbiota–mediated growth.

“We think of the gut microbiota as an organ whose developmental program begins at birth,” Gordon told The Scientist. “Problems with its development may be related to malnutrition.”

Creating a mixture of 25 bacterial isolates from the fecal samples of the malnourished infants, the team introduced the bacteria into recently weaned, germ-free mice. Of the 25 strains, the researchers found that 19 successfully colonized the murine gut. For five weeks, the researchers then fed the mice either an eight-ingredient, traditional Malawian diet or the same eight-ingredient diet along with either sialylated oligosaccharides purified from cow’s milk whey, or inulin—a mix of different fructose polymers commonly found in infant formulas.

Colonizing germ-free piglets with 14 bacterial strains from fecal samples of the malnourished infants, the researchers observed similar growth rescue with the addition of sialylated milk oligosaccharides.

Examining bacterial gene expression, the researchers homed in on Bacteroides fragilis as a primary consumer of the sialytated sugars and E. coli as a consumer of B. fragilis–degraded sugars. Martin Schwarzer, a postdoctoral researcher at the University of Lyon in France who was not involved in the study, noted in an email that the 25 bacterial species identified in this study could offer a starting point to identify growth-promoting microbes.

Bode noted that human milk oligosaccharides are more than just meals for gut microbes. Recent evidence has suggested that these sugars may serve to lower the risk of bacterial and viral infections in the gut, among other things.

“The ultimate goal is an intervention study to show that the [oligosaccharide supplementation] works in humans,” Bode told The Scientist. But first, he added, “we may need to establish the safety of these bovine milk oligosaccharides in human infants because some of these oligosaccharides are not found in human milk.”