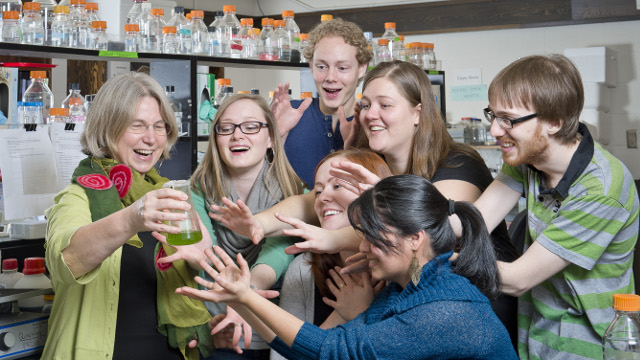 Quarmby (left) with her studentsSIMON FRASER UNIVERSITY, GREG EHLERS Gabriola Island, which covers but 22 square miles and is home to a mere 4,000 people, is just 40 miles from Lynne Quarmby’s molecular biology and biochemistry lab at Simon Fraser University outside Vancouver, British Columbia. But to get from Quarmby’s scientific home on the mainland to her bucolic cabin in the woods on the so-called “Isle of the Arts” requires two ferries and three hours.

Quarmby has completed the round trip almost every weekend since the cabin was finished in December. Her Friday evening commute is usually spent unwinding with a novel; on Monday morning, she’s pulling out her computer to gear back up for the scientific week ahead. “We only have a little life to live, and I chose the science,” Quarmby reflects, “but maybe part of me is a frustrated artist.”

Since she began painting in...

“I’ve really just been exploring the more artistic side of myself,” she explains. “I think there are a lot of people who are artistically, creatively driven and they’ve managed to funnel their energies into their science, but I don’t feel that side of me is adequately satisfied by my science.”

The “Artist’s Statement” that accompanies Quarmby’s first paintings—abstract watercolors—reveals her scientific background. “I start with an idea or hypothesis, do an experiment, and let the results point the way to what happens next,” she wrote—a sentiment that could as easily apply to doing research as to making art. “I strive to let the color and form lead the way, even when it takes me in a direction that is radically different from where I thought I was going.”

These early works were inspired by the unicellular green algae Chlamydomonas, colloquially known as pond scum, which she uses to study deflagellation. In an essay about common model organisms, Quarmby describes her first encounter with these algae as “love at first sight.” In another essay, “Reasons to Rejoice in Green Algae,” she expresses her deep appreciation for the microorganisms.

Quarmby’s paintings are hypnotizing whorls of color: bright pinks and vibrant blues, punctuated by slashes of red and black with green and brown flurries evoking nature’s structures. “You can feel her enthusiasm for biological processes—that sense of constant movement and change, and the knowledge that things are happening beneath the surface,” says scientific artist Michele Banks.

Quarmby’s long-time friend, artist Laura Von Rosk, called her work “Kandinsky-esque,” an observation that at first confused Quarmby, who at the time did not know who Wassily Kandinsky was.

“I love looking at [Quarmby’s] paintings and thinking about the work she does as a cell biologist,” Von Rosk says. “I see the connections between what she sees under the microscope and what’s going on in her brain.”

Growing up as a child in a rural part of Vancouver Island, Quarmby found beauty in nature without the aid of a microscope, spending hours exploring the forests and streams near her home. Harking back to that upbringing, she has moved away from her earlier, cell biology-inspired style and now paints mostly landscapes. She has also become an environmental activist. In 2012, she was arrested for blocking a coal train. Compared to working in the lab, “getting into climate change activism, I’m stepping way back and looking at a much bigger picture,” she says, “and maybe that’s what my painting is doing as well.”

As a scientist, an artist, and an activist, some might consider Quarmby to be coloring outside the lines. But this is not the first time in her life she has struggled against external pressures as to how she should behave. As a girl, Quarmby was not expected to go to college. It was only through her own determination that she landed at the University of British Columbia, where she completed her bachelor’s and master’s degrees. She earned her PhD in biochemistry from the University of Connecticut in 1990. Back in British Columbia, she is now the chair of her department at Simon Fraser.

“She’s somebody who’s always looking and seeking, either through her painting, observing the natural world as a scientist, or as a writer,” says Von Rosk. “She’s very engaged in the world.”

Despite her varied interests, Quarmby expects that science will always come first. “I’m still really driven by this problem I’m solving,” she says. For the last 25 years, Quarmby has been working to unravel the relationships among deflagellation, flagellar/ciliary assembly, and the cell cycle. “I can’t not see it through—I have to solve this before I retire.”