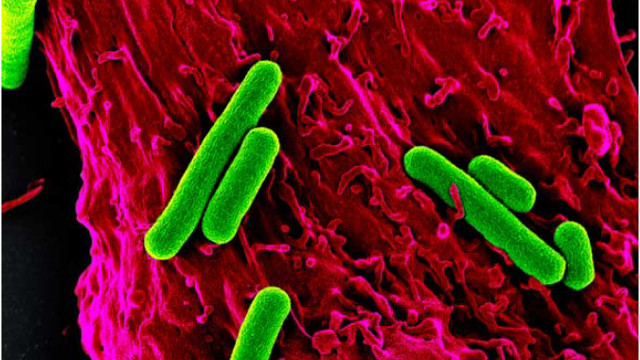 Rat cardiomyocyte with S. elongatus bacteriaCOHEN ET AL., SCIENCE ADVANCES, 2017.The use of photosynthetic microorganisms to provide much needed oxygen to damaged heart tissue could be a feasible approach to treating heart attacks, say the authors of a study published today (June 14) in Science Advances. Their paper describes the injection of the cyanobacterium Synechococcus elongatus into ischemic heart muscles of live rats, where, in response to light exposure, the microbes produced oxygen and improved organ function.

“It’s a very novel and clever application of an innate microbial property to a very serious medical problem that really is in need of innovative solutions,” says Susan Erdman, a microbiologist and immunologist at MIT who was not involved with the research. “I thought it was amazing and I was very excited about it.”

Photosynthetic organisms capture energy from sunlight and use it to convert carbon dioxide and water into carbohydrates for growth. The process creates a surplus of oxygen, which the organisms simply expel into the atmosphere, much to the delight of aerobic organisms such as humans.

Not taking these basic facts of existence for granted, Joseph Woo, a cardiothoracic surgeon at Stanford University, saw them as a solution to a problem. “One day I was thinking: what is the fundamental problem with a heart attack? It’s the absence of oxygen being delivered to the heart muscle.,” he recalls. “And, what in nature makes oxygen for us every single minute? Plants.”

“[Cardiologists] are always thinking about how to deliver more blood [to ischemic heart tissue],” Woo continues. But, if oxygen is the critical component, he thought, “what if you could take a plant, or the photosynthetic mechanism of a plant, and put it right next to a heart cell?”

To investigate this unusual idea, Woo’s team took an equally unusual approach. “We started grinding up kale and spinach to isolate the chloroplasts and put them with heart cells,” he says. But the results of these experiments were disappointing. “What we found is that chloroplasts do not like being outside of a plant cell,” he says, “they’re not very stable.”

So, the team instead tried the photosynthetic unicellular microorganism S. elongatus. “We put them with heart cells in a dish and we found that they could live together and, when we shone light on them, they could produce oxygen,” says Woo.

The team then tested the idea in live rats. They gave the animals heart attacks and then injected their hearts with S. elongatus and exposed the hearts to light. After just 10 minutes, oxygen in the bacteria-containing and light-exposed hearts had risen approximately 25-fold compared with just a 3-fold rise in oxygen in bacteria-containing hearts kept in darkness. And by 45 minutes, left ventricle pressure and cardiac output had improved, suggesting increased heart contractility.

STANFORD UNIVERSITY SCHOOL OF MEDICINE, DEPARTMENT OF CARDIOTHORACIC SURGERYThe microbes also provided long-term improvements to heart function, the team showed. Four weeks after rats were subjected to temporary cardiac ischemia (60 minutes)—during which the animals were, or were not, injected with S. elongatus and exposed to light—analyses of heart function revealed that recipients of the microbe treatment had significantly improved contractility compared with controls.

Once injected, the bacteria remain detectable in the heart tissue for about a day, says Woo, but during that time they do not appear to cause any toxic effects or significant immune response. “It’s almost like the body just ignored them,” he says. Though, he adds, it is also possible that the bacteria are cleared by “a mechanism that we are not effectively assaying right now.”

To examine bacterial clearance as well as determine the safety and potential feasibility of such a photosynthetic oxygen therapy “more detailed studies will be necessary,” says Geirsson, and “any use of such a treatment for human diseases is a long way off.” But, if it were to reach the clinic, he adds, “there are many diseases and conditions it could be applied to”—including strokes, peripheral tissue ischemia, and more.

It will certainly be “very exciting” to see where the technology goes, says Erdman. “One of the very fun things about science,” she says, “is that sometimes there are these most fundamental of concepts, but they can be brilliantly tweaked to entirely novel ends, and this is just such an example.”