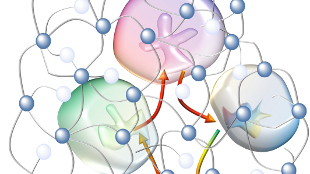 Illustration of an biomimetic enzyme nanocomplexYUNFENG LU, UCLAA nanocomplex of enzymes can lower blood alcohol levels and reduce liver damage in intoxicated mice, according to a study published today (February 17) in Nature Nanotechnology. The research, which employed a new technique to assemble and encapsulate multiple enzymes, suggests that tailored enzyme nanocomplexes could be built for a wide range of applications.

“It’s a very elegant approach to positioning enzymes in a controlled fashion, and it’s certainly a step forward,” said Jan van Hest, a professor of bio-organic chemistry at Radboud University in Nijmegen, Holland, who was not involved in the study. “They show very nice results already, with increased [enzyme] activity in living systems, and it’s a very generic approach so it looks like it could be extended [to other applications].”

In eukaryotic cells, most enzymes do not roam freely within the cytosol. Instead, they are...

Now, a team led by Yunfeng Lu of the University of California, Los Angeles, has successfully demonstrated a new way to make stable enzyme clusters. To combine three different enzymes, the researchers attached substrates for each to the ends of a single-stranded DNA scaffold. When the scaffold and enzymes are mixed, the enzymes bind to their respective substrates on the scaffold. The researchers then coated the enzymes with a network of polymers, forming a thin, permeable shell that protects the complex. Finally, the DNA scaffold is removed, freeing up the enzymes’ binding sites so they can attach to new substrates and catalyze reactions.

“In enzyme position assembly, it’s quite difficult to have almost molecular level control, but if you want to get cascade catalysis it’s important,” said van Hest. “What they have done very smartly is to combine the positional control of using DNA scaffolds with the robustness of polymer encapsulation.”

Lu and colleagues first tested a complex of three enzymes designed to mediate consecutive reactions of sucrose and glucose in mice, and found that it displayed enhanced catalytic efficiency and stability. Next, they used the same method to construct a nanocomplex made up of alcohol oxidase (AOx) and catalase (Cat) to see if it could serve as a prophylactic for alcohol intoxication and prevent liver damage.

When they fed mice a diet of alcohol and the nanocomplex (AOx–Cat), they found that blood alcohol concentration (BAC) was reduced by 10 percent at 45 minutes, by 32 percent after an hour and a half, and 37 percent after 3 hours, compared with significantly smaller reductions in mice fed alcohol and just one of the enzymes, with or without a polymer shell.

Furthermore, mice treated with AOx–Cat 30 minutes after intoxication had the lowest levels of alanine transaminase (ALT), an enzyme biomarker for liver damage. “We’ve shown that we can combine these two enzymes in a way to make them stable, and that in animal models the complex is active and reduces BAC and liver damage.”

But the alcohol oxidation process also produces another toxic intermediate called acetaldehyde, and there is currently no enzyme that can efficiently break this down. When such an enzyme is developed, however, it could be incorporated into a nanocomplex to create an even more effective antidote for alcohol consumption, Lu said. “I don’t see any major obstacles for this.”

Considering the vast library of enzymes available already, Lu is confident that this new method for creating enzyme nanocomplexes can be used for a wide range of applications. Indeed, he is already working with Kythera, a California-based biopharmaceutical company, to design a nanocomplex to eliminate the male hormone that causes hair loss.

Van Hest agreed. “At the moment, enzymes are combined in very crude manner,” he said. “If you want more control, this is certainly a nice way to do it.”