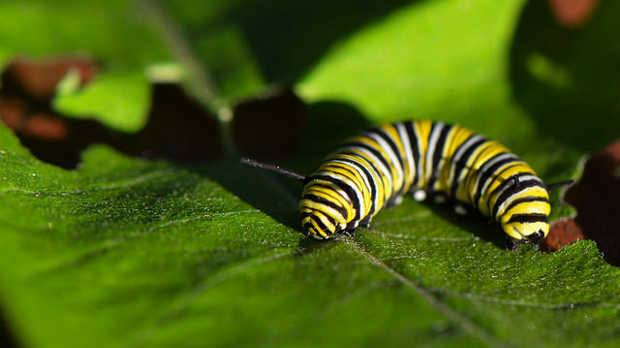 Monarch caterpillar on common milkweedFLICKR, USFWS MIDWESTMonarch butterfly caterpillars have evolved the ability to store toxins known as cardenolides, obtained from their milkweed diet, specifically to make themselves poisonous to birds, as has at least one other species of milkweed-munching caterpillar, according to a study published Wednesday (November 4) in Proceedings of the Royal Society B.

“This finding is fascinating and novel,” Stephen Malcolm, a professor at Western Michigan University who studies cardenolides but was not involved in the new research, wrote in an email to The Scientist. “It is exciting to have evidence for the importance of top-down influences from predators.”

Scientists have long known that milkweed cardenolides, which in most animals disable a vital sodium-potassium pump enzyme if they are absorbed into the blood, serve to make caterpillars and butterflies dangerous meals for their predators, but whether that acquired toxicity was a side...

Monarchs (Danaus plexippus) have specially adapted enzymes that are almost entirely immune to cardenolides’ toxic effects, as do queen butterflies (Danaus gilippus), although the queens’ enzymes are more susceptible to the compounds than monarchs’. The enzymes of common crow butterflies (Euploea core) can be disabled by cardenolides, but this species does not absorb the toxins into its bloodstream, instead breaking them down or simply excreting them before they can do any harm. Agrawal and his team hypothesized that if cardenolide-resistant enzymes arose simply to help caterpillars eat milkweed, then monarchs and queens would eat more milkweed than common crows. But all three species chowed down equally.

“These little caterpillars are plowing through [the milkweed],” Agrawal said. “They basically all do really well,” regardless of whether they have the enzyme adaptation or not.

If the cardenolide-resistant enzymes don’t help the caterpillars eat more milkweed, Agrawal and Petschenka reasoned, they must exist for another reason, such as predator defense. The researchers measured levels of cardenolides in the bodies of the three caterpillar species and found that, while common crows don’t store any, both monarchs and queens store the toxic compounds, with monarchs storing concentrations about twice as high as queens. Such storage turns these species into poisonous prey, effectively warding off birds and other predators.

“I would call it a landmark paper,” said Michael Singer, a professor at Wesleyan University who studies similar systems but was not involved in this study. “[It helped] distinguish between these alternative views” of how and why insects develop resistance to toxins. While the experiments weren’t especially complicated, he added, they were “experiments that people hadn’t thought to try . . . and they turned out to be very revealing.”

Other researchers in the field were also impressed. “[It’s] an important finding,” Brian Farrell, a professor at Harvard who studies insect evolution and was not involved in the research, wrote in an email to The Scientist. “[It’s] a very useful case study for pedagogy as well as further research on similar systems.”

Agrawal pointed out that many other insect species have also evolved to feed on milkweed, with similar or identical adaptations to those that monarch and queen butterflies have. He plans to look at these species in future studies to determine if they, too, are using the toxins to protect themselves from predators.

Singer is also curious. “Now I’d like to know how general this really is,” he said.

G. Petschenka and A.A. Agrawal, “Milkweed butterfly resistance to plant toxins is linked to sequestration, not coping with a toxic diet,” Proceedings of the Royal Society B, doi:10.1098/rspb.2015.1865, 2015.