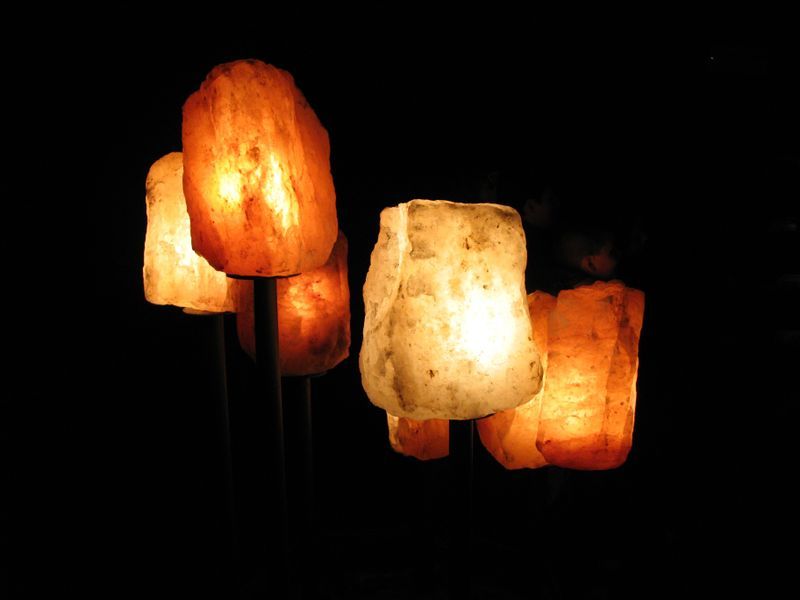 ANDREW BOSSI, WIKIMEDIAOne day in early July, a customer service representative for a company called Crystalite Salt received a phone call from Jennifer Lardge, a physicist. Lardge was curious about the science behind one of their products: lumps of salt, called lamps, that are meant to improve your health when they are heated. "I was looking at your Web site and I was just wondering about how salt lamps actually work," Lardge said.

"Right," responded the Crystalite Salt customer service representative."Well I was just wondering how they release the ions?""It's when it's warmed. The heat from the bulb or the candle. And it's like a reaction with the salt that then produces the ions."

"OK, it's just I have studied science a little and I was thinking that the bonds that hold the salt ions together are quite strong and I was wondering if there was enough energy...

"OK, which evidence is that?"

"There are lots of sites that tell you about salt lamps."

"Is there anything more concrete than a Web site?"

"I haven't got anything more concrete -- no."

Lardge is one of an informal group of scientific researchers who had met through various workshops sponsored by the UK charity, Sense About Science. Over the past several months, the researchers started chatting about all the bothersome ways that certain advertisers... well, advertised. The researchers were particularly irritated by companies that used scientific-sounding claims to back their products and market them to the public. Like Lardge, several of the researchers took it upon themselves to call up some of the companies whose advertisements they'd noticed and ask some more questions about the scientific research that went -- or didn't -- go into them. Both the US and UK allow supplement products to be marketed without explanation of scientific efficacy, but they still have to abide by truth in advertising rules."I'm increasingly annoyed by the way companies use scientific-sounding language to make the unproven benefit of their products sound credible," wrote Harriet Ball, a biologist at Kings College London, in a report released Wednesday (October 10) by Sense About Science.

The report, called "There goes the science bit..." is a transcript of 11 conversations that researchers had with customer service people at companies peddling "Aerobic Oxygen" to increase oxygen levels in the blood, "Salt Lamps" that protect from electromagnetic waves, cosmetics that fend off more electromagnetic waves, and other abounding scientific claims in ingredient lists on supermarket shelves. Ball called Nestlé about their Ski Yoghurts, which she had noticed had been recently re-marketed as containing "Activ8" -- a complex of eight B vitamins that, according to Nestlé, optimized energy release. She was put through to the nutritionist at Nestlé, who explained that Activ8 components "get the optimum nutrition out of your food and direct it to the correct areas."

"Is it also helpful to people who've got a good diet anyway, and have enough B vitamins already in their diet?" asked Ball.

"Well," the nutritionist responded, "if people have got enough B vitamins in their diet already, what it'll do, it'll optimize that."

"What do you mean optimize?"

"Well, it will get the most out of your diet anyway, by using the vitamins and minerals that's already in your healthy diet."

"If you put an excess of vitamins into people's bodies," Ball noted, "they don't really use them, they just get excreted."

Eric de Silva, a physicist and staff member at Sense About Science, called the manufacturers of the Q-link pendant, a metal pendant worn around the neck and advertised to protect from electromagnetic radiation, cure hangovers and skin conditions, improve your golf game, and reduce road rage. The customer service representative tried to explain how the pendant worked: "Well, you have an energy field because of the electrical impulses your body puts out. Your own, it's called a bio-field, the energy field around your body."

"So, there are the impulses for your nerves, you're saying?" asked de Silva.

"Yeah, it aligns with it and helps amplify your own energy, it externalizes it more."

"So what does that do? I mean, so if you have a nerve impulse traveling and it generates a field, and then the pendant makes that field bigger, what does that...?"

"It helps protect your body from the electromagnetic frequencies from computers and electronic equipment...and cell phones."

"Right, so, what's the frequency that your body has then?"

"I don't know...there is some information about that on our Web site."

"Yes."The conversation went on for quite a bit. The makers of the Q-link pendent said they conducted double-blind studies with the product, but they wouldn't reveal the specific elements and procedures to make Q-link.The project, says Alice Tuff, director of program research at Sense About Science, is meant to encourage other scientific researchers to openly question marketing schemes using scientific-sounding information. "It's easy to say 'that annoys me' and not do anything about it," she says. "All it takes is phone call or letter to make companies more aware of what they put on their Web sites."

Links within this article:

"There Goes the Science Bit...", edited by Alice Tuff and Frank Swain http://www.senseaboutscience.org.uk/index.php/site/other/175