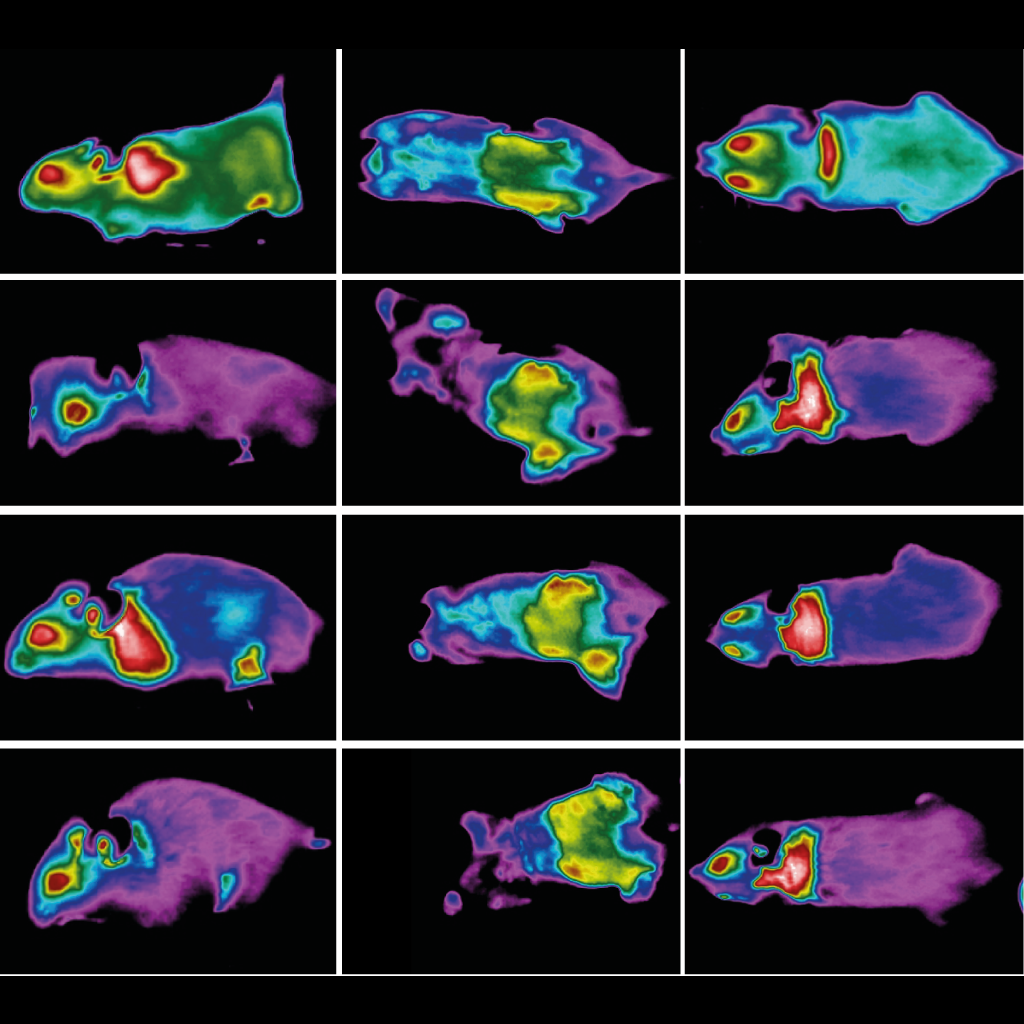 Infrared imaging of a calorie-restricted mouseUNIVERSITY OF GENEVA, SALVATORE FABBIANO (CELL METABOLISM 24:1-13)In mice, severely restricting caloric intake promotes the transformation of white fat into brown fat, which contains cells that burn energy faster, according to a study published today (August 25) in Cell Metabolism. The innate immune system, researchers from the University of Geneva, Switzerland, and their colleagues reported, mediates this fat cell-transforming effect.

“The paper nicely characterizes this phenomenon,” said Ajay Chawla of the University of California, San Francisco, who was not involved in the work. “And it mechanistically seems to identify a pathway that we had identified.”

Several conditions are already known to make white fat tissue more brown—cold temperatures, microbe loss, and gastric bypass surgery among them. Fabbiano and colleagues hypothesized that the common feature of all these experiences was an increased expenditure of calories compared to intake.

Cutting calories by extreme amounts—say, 40 percent—has been linked in animal models to a longer lifespan and improved health outcomes, such as better liver and pancreas function. Fabbiano’s team surmised converting fat might be part of the way caloric restriction confers its benefits and that—as Chawla and others have proposed—an innate immune response might link the two.

To test their hypothesis, the scientists monitored how fat changed in calorie-restricted lean mice and obese (leptin-knockout) mice, examining the immune system’s role in changes to fat tissue composition.

After keeping a group of lean male mice on a calorie-restricted diet for four weeks, using PET-CT imaging, the team compared the animals’ subcutaneous and visceral fat stores against those of lean mice with free access to food. The researchers found both fat pads in the calorie-restricted mice contained more brown fat cells. Instead of a single large, lipid globule in their cell bodies, brown fat cells have multiple smaller droplets. These cells are also denser, and contain more mitochondria (all traits that make them appear darker, hence the “brown” moniker).

To confirm that the beiging fat was changing the animals’ metabolism, the team tested the mice in a cold environment (43 °F). Then, with infrared imaging, the researchers monitored how the mice regulated heat for 12 hours.

The calorie-restricted mice appeared to be burning more energy than their freely eating counterparts. Imaging from below revealed that, in the calorie-restricted mice, the beiging fat was also producing more heat than the fat found in control mice. When the team tested calorie restriction on leptin-knockout mice, their fat also beiged and the animals remained warmer in the cold.

Immune signaling within the calorie-restricted mice also changed, the team reported, with higher levels of interleukin-(IL) 4 and IL13, which are characteristic of the type 2 immune response. To test whether this reaction was responsible for converting the fat, the researchers removed the immune system entirely: they used radiation to kill stem cells in the bone marrow of mice, and transplanted bone marrow with either fully functional, wild-type immune system cells or defective ones (knocked out in the shared receptor subunit for IL4 and IL13).

Only mice with intact immune responses experienced beiging. Mice unable to mount a type 2 response still lost weight on a calorie-restricted diet, but in an atypical way. “The thing that was really amazing [was that] these mice don’t lose any weight in their subcutaneous fat, though their visceral fat decreases,” Fabbiano told The Scientist. “It means that to reduce the amount of fat in certain regions of the body, you need to have browning of that fat.”

Deborah Clegg, an internal medicine researcher at Cedars-Sinai Medical Center in Los Angeles, California, who has observed beiging fat in mice that have undergone gastric bypass surgery, said she was somewhat surprised by the model systems the team chose. “I think this is first time I’ve ever seen someone taking a lean mouse and making it leaner,” she told The Scientist. That the obese mice were genetic knockouts might also have influenced their responses, she added. “We do this so we can ask the question, how can we help the [hundreds of] millions of people who are obese lose weight? And this [mouse study] is not answering that question.”

Fabbiano maintained that the lean mice were a better choice for this work. “We needed a healthy model, immunocompetent and without any confounders to study the general response to caloric restriction first,” he said. “Of course, therapeutically it’s more interesting to use an obese mouse. But [they] may also conceal some general mechanism . . . impaired in them because of their obesity.”

Chawla said he thought the study was rigorous, but noted that Fabbiano and colleagues may have missed a second mediating mechanism: the effect of temperature. Animals become warmer when they eat, so mice on a calorie-restricted diet might feel cooler, he explained.

Indeed, the team observed that calorie-restricted mice had lower body temperatures, overall. So it could be temperature causing the animals’ fat to brown, Chawla said. “Clearly, on my part, it’s speculation,” he said. “But they haven’t formally excluded it.”