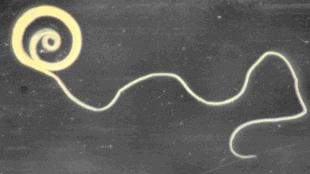 Trichuris suis, parasitic helminth of pigs.Wikipedia, Universidad de Córdoba.A growing body of evidence suggests that in some patients, increased inflammation contributes to autistic behaviors. Now, a Phase I clinical trial is under way to measure the effects of infecting autistic patients with a non-pathogenic parasitic worm. Scientists at Montefiore Medical Center at the Albert Einstein College of Medicine in New York and biotech company Coronado Biosciences will test the hypothesis that treating these patients with Trichuris suis, a non-pathogenic parasitic pig whipworm, will dampen their immune responses and ameliorate repetitive and irritable behaviors.

“The trial is a novel approach [to autism treatment] with a naturally occurring drug delivery system”—a parasitic worm, said Eric Hollander, a Montefiore psychiatrist and head scientist on the trial.

Autoimmune and allergic diseases are more prevalent in more developed countries where citizens are accustomed to better water quality and less...

The idea to tackle autism symptoms with parasitic worms came from Stewart Johnson, the father of an autistic boy, who learned of the hygiene hypothesis while researching tantalizing links between autism and immunity. (Read more in The Scientist’s feature “Opening a Can of Worms.”) Stewart dosed his teenage son—under Hollander’s supervision—with eggs from the helminth Trichuris suis, which infects and is harmful to pigs but is not pathogenic in humans. With continued treatment, repetitive behaviors, resistance to change, and irritability all decreased in Stewart’s son, said Hollander.

“There are a number of epidemiological studies showing that there’s an increase in autoimmunity in families with autism,” said Paul Patterson, a neurobiologist at the California Institute of Technology who is not associated with the trial. “So therapies that modulate the immune system seem like a logical possibility.”

In addition to physical symptoms, a disordered immune response can produce neurological symptoms as well, noted Judy Van de Water, an immunologist at the University of California, Davis, who is a scientific consultant for Coronado Biosciences on autoimmunity and autism. Schizophrenia and autism are two disorders linked to aberrant inflammatory responses.  Some cases of autism are associated with symptoms such as increases in inflammatory cytokines in the patient’s blood and anti-brain autoantibodies. Additionally, in animal models, aberrant maternal inflammation during gestation is also correlated with autistic behaviors and long-term immune system effects, suggesting that a mother’s immune response can “imprint” how her child’s immune system responds to activation later, said Van de Water. She cautions, however, that not all autistic individuals display characteristics of chronic inflammation—some actually have immune deficits, making it important to tailor any therapy to an individual.

Stewart’s success prompted Hollander to initiate a more rigorous trial of Trichuris suis ova (TSO) in treating autistic behaviors. Supported by Simons Autism Research Initiative and using TSO supplied by Coronado Biosciences, Hollander will give TSO to 10 young autistic adults between the ages of 18 and 35 in a double-blind controlled trial. TSO, which has been demonstrated safe in trials of ulcerative colitis, doesn’t penetrate the gut of humans, so there’s little risk of chronic infection. The study group will be divided into two—one will receive regular doses of TSO for 12 weeks while the other group receives a placebo. Then, after a two-week “washout” period (when the worms will pass from the patients’ intestines), the groups will switch treatments.

This crossover design helps increase the statistical power of the study, despite the small cohort, explained Bobby Sandage, Coronado’s CEO. Patients will be evaluated on various measures of autism symptoms, including repetitive behaviors, obsessive-compulsive behaviors, and aggression. Coronado is also testing TSO against a variety of classic autoimmune disorders, including multiple sclerosis and Crohn’s disease. The treatment has shown a strong safety record, even when taken by inflammatory bowel disease patients on immunosuppressants, noted Jouvin. Hollander and Sandage said that they hope to have results within a year.

As promising as TSO may be, Patterson counsels caution. “I think [TSO] is a blunt instrument,” he said. “We don’t know how it works, and it may have lots of different effects, probably not all positive.” Even if TSO therapy does not pan out, it may point the way to other treatments. A large percentage of autistic individuals also have gastrointestinal disorders, and TSO was recently shown to affect the microbial ecosystem of rhesus macaques. Patterson’s own work suggests that probiotic therapy can alleviate some autistic symptoms in a mouse model of autism.