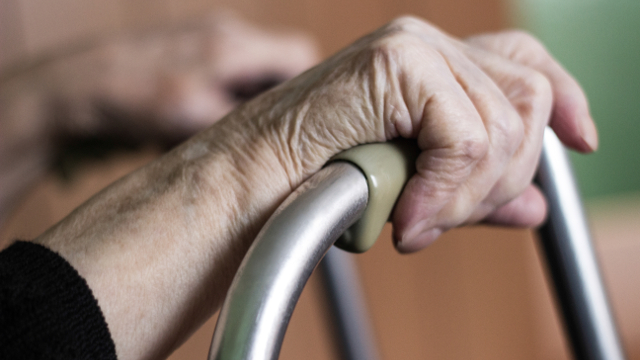 ISTOCK, SANJAGRUJICCan one grow old without growing frail? One company is banking on the idea that with the right treatment, the answer can be ‘yes’ for many more people. In clinical trials published in October in the Journals of Gerontology, Longeveron, the firm developing the therapy, reports that a single infusion of mesenchymal stem cells from younger donors had no apparent safety downsides for people with aging-related frailty—and spurred improvement in many of their symptoms.

The work is “one of the first studies that actually attempts to address [frailty] in a well-defined or well-described fashion, and certainly, to my knowledge, the first such study with mesenchymal stem cells,” says Keith March, a cardiologist who directs the Center for Regenerative Medicine at the University of Florida and was not involved in the trials.

“We looked at a variety of measures, and what was exciting to us was...

Frailty syndrome includes symptoms such as weak grip, slow walking, and low energy levels, and patients who have it are more vulnerable to serious illnesses, falls, and death than people of the same age who don’t. In recent years, researchers have begun to tease out some potential biological causes of frailty, such as inflammation, oxidative stress, and dysfunctional mitochondria. “You can have two 80-year-olds—one’s still out playing tennis, and the other’s in a wheelchair—there is a biological difference between those two people. It’s not just the luck of the draw,” Hare says.

A drop in the numbers of the body’s own stem cells is another biological difference associated with frailty, and Hare and colleagues wanted to see what the effect would be of dosing patients with new cells. For their Phase 1 clinical trial, they recruited 15 patients with different levels of frailty, and treated them with a single infusion of stem cells from the bone marrow of healthy adult donors.

The treatment appeared safe, Hare says, and there were also hints that it might be working: the average distance walked in six minutes was extended by nearly 40 meters—an increase of 10 percent—six months after the infusion, and patients’ average cognitive scores rose slightly. In other measures, such as grip strength, there was no significant change.

The gains the patients made, while statistically significant, I’m not sure how clinically relevant they were.—Brian Feeley,
University of California, San Francisco

The researchers also conducted an expanded, Phase 2 trial. They recruited 30 patients, splitting them into a placebo group, a group given a dose of 100 million cells, and a group given 200 million cells. No adverse events linked to the cells occurred within one month after any of the infusions, and the 100-million group—though not the 200-million group nor the placebo group—showed improvements in the 6-minute walking test and other physical performance measures, along with drops in TNF-α levels.

Hare suggests that the improvements may come from stem cells’ interactions with various types of immune cells, which have been shown to tamp down inflammation. As an editorial accompanying the studies notes, “[Mesenchymal stem cells] have a number of biological properties that make them attractive as therapeutic agents: they home to sites of inflammation and tissue injury after an intravenous injection; they differentiate into many cell types including muscle and bone; they secrete bioactive compounds that induce tissue recovery and suppress inflammation; and they avoid host immune responses because of their immunomodulatory effects.”

See “For Whom the Biomarkers Toll?”

The fact that the stem cells were delivered intravenously, like a blood transfusion, is important, March says, because this method is simpler and more straightforward than transplanting the cells locally, meaning that the therapy could be relatively scalable and affordable if approved.

Brian Feeley, an orthopedic surgeon and stem cell researcher at the University of California, San Francisco, who was not involved in the study, says an outstanding question is whether the improvements attributed to the stem cell infusions are meaningful for patients. “The gains the patients made, while statistically significant, I’m not sure how clinically relevant they were given that they were small increases,” he says. “The results are encouraging, but it’s hard to draw a conclusion from that small effect size in such a small sample.”

If further testing is successful and the treatment is approved, it may be helpful for frail patients who’ve been hospitalized for a serious injury such as a hip fracture—an event associated with high mortality—Feeley tells The Scientist. “I’m cautiously optimistic, because it’s certainly better than other treatments so far. I mean, right now we have ‘go out and exercise,’ which is hard if you really feel frail.”