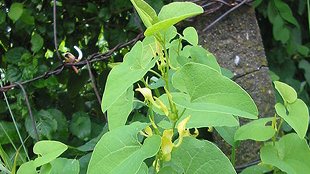 Member of the Aristolochia genusWIKIMEDIA, BOGDANPlants of the Aristolochia genus have for centuries been used in Chinese herbal remedies, but they contain a naturally carcinogenic compound that causes mutations in the cells of people who consume them, according to two studies published in Science Translational Medicine today (August 7). The papers reveal that the compound, called aristolochic acid, causes more mutations than two of the best-known environmental carcinogens: tobacco smoke and UV light.

“A lot of people in the lay public assume that if something is herbal or natural that it is necessarily healthy,” said Marc Ladanyi, an investigator in the human oncology and pathogenesis program at Memorial Sloan-Kettering Cancer Center in New York who was not involved in the studies. “But this work very clearly shows that this natural plant product is extremely genotoxic and carcinogenic.”

Despite the long history of Aristolochia use in herbal remedies,...

Aristolochic acid has been banned in most countries since 2003. But, said Thomas Rosenquist of Stony Brook University in New York, “there are a lot of countries in Asia, like India, that still use it as part of their traditional herbal medicines. And even though it is banned in places like China, it is still readily available.”

The continued use of the plants might be because “[practitioners] may be slow to accept that they are actually hurting people that they are trying to help,” said Rosenquist. “And there may be a 20- to 30-year lag time between exposure to the carcinogen and [developing cancer], so making the connection might be difficult.”

In addition, many people may simply not know about the risk, said Steve Rozen of the Duke-National University of Singapore Graduate Medical School. “I’m eager to make sure this paper gets public press, because I think it’s important that people really understand the dangers.”

Rosenquist, Rozen, and their teams conducted two separate studies to analyze the genome-wide mutations in patients with UTUCs who had known exposure to aristolochic acid. The two reports found that an unusual mutation, called an A-to-T transversion, previously identified in aristolochic acid-exposed tissues, was abundant throughout the genomes of the cancerous cells. And the number of mutations in general was unusually high—far greater than that seen in lung cancers caused by smoking or in melanomas caused by UV exposure.

“The number of mutations identified per megabase of DNA was pretty astounding,” said Elaine Mardis, director of technology development at The Genome Institute at Washington University in St. Louis, who was not involved in the work. “Heretofore we thought that melanoma was the world class leader in terms of mutation number, or rate, but this now looks like it’s above and beyond that.”

The genome-wide analyses also revealed a preference for mutations to occur at particular sequence motifs—CAG or TAG—and to occur on the non-transcribed strand of coding DNA, indicating some mutations were erased as a result of transcription-coupled repair. These patterns, together with the extremely high mutation frequency and the abundance of A-to-T transversions, equated to a genomic signature of aristolochic acid exposure.

Identifying the signature in a patient’s DNA probably wouldn’t change the way they are treated, said Rosenquist. But screening for the signature in individuals thought to have been exposed to aristolochic acid may enable early detection of UTUCs. “We are trying to develop a screen to detect DNA carrying these mutations in plasma and urine . . . and see whether it has the sensitivity to detect those cancers before other routine methods [would],” he said.

In addition to the known risk of developing UTUC, Rozen’s team discovered that certain liver cancer genomes exhibited the telltale signature of aristolochic acid exposure. Thus, more organs might be at risk from exposure to the carcinogen than originally thought.

The sequencing of other cancer genomes will reveal whether this is indeed the case. For now though, perhaps the most important message of the two studies is that consuming these plants can certainly be dangerous. “As is often the case in cancer research, the biggest successes can be in prevention,” Rozen said.