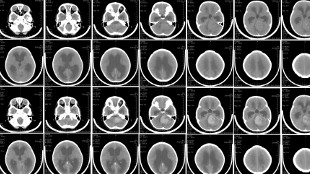 WIKIMEDIA, REYTANTo fuel runaway tumor growth, cancer cells use a metabolic mechanism, called glycolysis, that normal cells were believed to only use in the absence of oxygen. But according to a study released today (January 23) in Cancer & Metabolism, certain progenitor cells use glycolysis to power rapid growth during early tissue development, even when oxygen is readily available—suggesting that tumors arise out of the normal metabolic processes for tissue growth.

“They demonstrate nicely that [aerobic glycolysis] is required in normal development,” said cancer genetics researcher Chi Van Dang, director of University of Pennsylvania’s Abramson Cancer Center, who was not involved in the study. Moreover, he adds, the study highlights the importance of tightly regulated metabolism and cell growth—whether to spur early tissue development or unbridled tumor development. Before this study, “the prevailing viewpoint was that metabolism was just along for the ride.” (Read an in-depth discussion of...

Unlike the controlled diet of normal cells that make energy from pyruvate in the presence of oxygen, cancer cells gobble up glucose and convert it to lactic acid. Why and how tumors utilize this type of metabolism even in the presence of oxygen—a phenomenon first noted in the 1920s by Otto Warburg and hence known as the Warburg effect—has long been an enigma of cancer physiology.

The first clue to solving the Warburg mystery came 10 years ago, when, working as a researcher at the Memorial Sloan-Kettering Cancer Center in New York City, pediatric neuro-oncologist Timothy Gershon and colleagues noticed something peculiar about neuron progenitor cells: when they prodded the cells in the lab, they started multiplying and the cell culture media changed colors, indicating a more acidic pH. Gershon and his colleagues assumed the changes resulted from the fact that the cells were making lactic acid, he said. But they didn’t immediately piece together the observation and the Warburg effect.

Now at the University of North Carolina, Chapel Hill (UNC), Gershon is focusing on a rare brain cancer called medulloblastoma, and has, found that both brain tumor cells and healthy, multiplying neuron progenitor cells use aerobic glycolysis. They also found that that this distinct diet requires the enzyme hexokinase-2 (HK2)—instead of HK1. Both HK1 and HK2 work to trap glucose in the cell by tagging it with phosphate, but unlike HK1, HK2 does so without any restraints. Thus, by using HK2, the cells have an endless supply of sugar, which can fuel rapid growth even when oxygen begins to run out.

When Gershon and colleagues selectively knocked out the HK2 gene in the brains of mice prone to medulloblastoma, they found that many of the mice didn’t develop the hallmark lethal brain cancer. Moreover, the tumor cells in the knockout mice transformed into normal cells. “We thought that if cells ran out of energy, they’d die,” Gershon said. “But what we actually see is that when the tumor cells are blocked in their metabolism and they can’t meet their energy needs through [aerobic] glycolysis, they differentiate into non-dividing cells.”

The findings point to HK2 targeted therapies that could one day treat medulloblastoma and other cancers, Dang said. But he cautions that the link between normal cell metabolism and tumor development may make developing such therapies more complicated. “We’re not going to get away without any side effects,” he said. The trick will be to find a window when researchers can block HK2 to stop tumor growth, but not normal development.

Additionally, Dang points out, that although the HK2-knock out mice didn’t develop lethal tumors, some did develop non-lethal brain tumors, which will require further research to understand.

Still, Gershon, who treats pediatric cases of medulloblastoma, is optimistic. “I’m encouraged that these mice didn’t drop dead when we knocked out HK2,” he said. “I think this is something that will lead to an improved therapy in the time that I’m a researcher, which would be nice to see.”