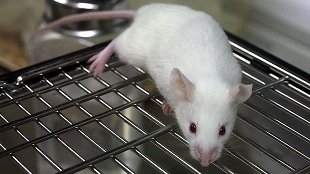 WIKIMEDIA, RAMAA rogue enzyme that causes a number of different human cancers can be stopped in its tracks by two newly discovered small molecules, according to papers published today (April 4) in Science. The molecules bound mutant forms of the enzyme, preventing their aberrant behavior and slowing cancer cell growth in culture. The researchers suggest a similar approach might soon be feasible in patients.

“This is another important step in what so far has been a truly a fascinating story that I hope will ultimately end with a compound that works in the clinic,” said Kenneth Kinzler, a professor of oncology at The Johns Hopkins University in Baltimore, Maryland, who did not participate in the research.

The story to which Kinzler referred is that of isocitrate dehydrogenase (IDH), an enzyme involved in cell metabolism that was recently found to be mutated in a variety of different cancers,...

IDH is an unusual oncogene, Kinzler said. While most oncogenes simply increase or decrease their activity when mutated, the mutations to IDH give the enzyme an entirely novel function. Using the analogy of a car, he explained that most gain-of-function mutations “are like sticking the accelerator down and making it go faster. But in this case, the mutations made it fly.”

IDH’s normal role in the cell is to convert isocitrate to a-ketoglutarate (aKG), and vice versa, which ultimately regulates histone and DNA methylation. The novel cancer-associated mutation causes the enzyme to convert aKG to an unusual metabolite called R-2-hydroxyglutarate (2HG). Research suggests that 2HG competes with aKG and thereby reduces the activity of aKG-dependent enzymes, resulting in hypermethylated chromatin. This hypermethylation is thought to interfere with normal cell differentiation, causing immature cells to proliferate and cause cancer.

Scientists from the pharmaceutical company Agios, together with colleagues in academic institutions, set about screening for small molecules that would inhibit the activity of the mutant but not the wild type enzyme. It’s an attractive route for therapy, said Hai Yan, a professor of pathology at Duke University in Durham, North Carolina, who was not involved in the work, because it would likely result in fewer if any off-target side effects.

Through a round of screening followed by chemical optimization the researchers developed AGI-5198 and AGI-6780, which inhibited 2HG production by cells carrying the most common mutants of IDH1 and IDH2—two isoforms of the enzyme. Both molecules’ inhibitory activity was specific to the particular mutant isoform, neither inhibiting the wild type enzyme nor the other mutant form. That level of specificity is “exactly what you want in a drug,” said Kinzler.

Besides preventing 2HG production, the molecules also induced differentiation of the waywardly proliferating cells of human cancer in culture. AGI-6780 treatment of leukemia cells carrying the IDH2 mutant and AGI-5198 treatment of glioma cells carrying the IDH1 mutant both resulted in the cells increasing their expression of maturation markers. Furthermore, growth rate of the glioma cells was inhibited both by AGI-5198 treatment in culture, as well as when the cells were grafted inside mice that were given AGI-5198 orally.

“This is really the first key proof-of-concept of the therapeutic use of these types of agents for targeting the IDH mutations,” said Scott Biller, chief scientific officer for Agios and an author on both papers. “That’s incredibly exciting.”

Biller said the next step would be to develop clinical grade versions of AGI-5198 and GI-6780. “These molecules are not ready for human studies,” he said, “but we expect to be in the clinic with both IDH1 and IDH2 inhibitors in the next 12 to 24 months.” And he suspects that the 50,000 cancer patients per year that are found to have IDH mutations could all benefit from such treatment.

Yan cautioned restraint, however. Although he was “excited by the papers,” he said that “more verification needs to be done in a larger number of systems before a conclusion can be made.” For example, he suggested that the researchers’ use of one patient cell line for each disease was “not enough.”

Regardless of whether versions of AGI-5198 and AGI-6780 make it to the clinic, however, Yan said that they could certainly help researchers explore the molecular mechanisms of the mutations. “These are two very valuable compounds for helping biologists understand the disease,” he said.