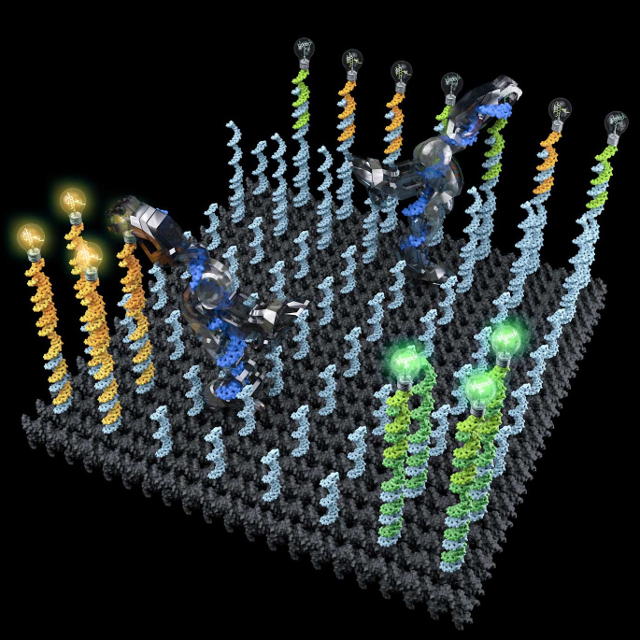 Conceptual illustration of two DNA robots collecting and sorting cargoDEMIN LIU (WWW.MOLGRAPHICS.COM)Walking across a precisely folded DNA landscape, a teeny tiny robot picks up a molecular payload, drops it off at a defined delivery address, then heads off to retrieve and sort more molecules. This is not the opening scene of a new sci-fi movie, it’s the outcome of a very real bioengineering project reported today (September 14) in Science. What’s more, these robots find and sort the molecules without human micromanagement.

“The design of the robots is incredibly elegant. . . . It has great simplicity, but the robots can nevertheless do non-trivial things,” says computer scientist John Reif of Duke University who was not involved in the project. “This is beautiful research that has taken the field of DNA robotics to a new stage.”

DNA is a wonderful building material. So...

Beyond these fancy fabrications, known as DNA origami, the molecule is also being used to build robots. The predictability of DNA’s molecular behavior, especially its zipping and unzipping abilities (its transformation between double- and single-strand states), is enabling bioengineers to design robots that can walk and carry things. Single-stranded “feet” form temporary bonds with complimentary sequences along a nucleic acid track, while single-stranded “hands” bind complementary targets to pick up goods.

However, the existing DNA robots have limitations. Either they are not autonomous—“Each foot movement requires. . . addition of a new DNA strand by the user,” postdoc Anupama Thubagere of CalTech explains in an email—or they have very complex chemistries involving many DNA strands, writes her advisor, Lulu Qian. “This complexity doesn't mean the robots cannot be developed for more interesting functions, but one would expect to encounter a fair amount of difficulties when doing so,” Qian continues.

To avoid such difficulties, Qian, Thubagere, and colleagues have created a simple modular system with just four DNA components: robots, cargos, delivery recipients, and an origami board to which the other components bind. The robots consist of a single-stranded stretch of DNA divvied up in order along its length into a foot, a leg, another foot, an arm, and a hand. The nucleic-acid cargos have sequences complementary to the robot’s hand and arm plus a stretch that matches up with a specific drop-off site.

The origami platform can be thought of as a rugged checkerboard upon which the cargos and their recipients are attached to specific squares, while the robots roam freely square-to-square. The robot’s leg domain, in this analogy, can bind any square (black and white), while each of its feet can bind only one color (black or white).

With a leg and one foot bound to a black square, for example, the robot can make a step to a neighboring white square with the free foot, which then takes the leg domain with it (unzipping it from the black square and zipping it to the white). Because the energy state of binding to either location is equal, the robot can move randomly about the board without input or instruction.

Conceptual animation of a DNA robot (blue) taking a single step on a linear track (gray).CALTECH

To assess the robots’ ability to collect and sort cargos, the researchers placed a mixture of two different DNA packages on one side of the board, and the respective recipients in two separate clusters on the other. Labeling the cargo sequences with fluorescent tags allowed the researchers to visualize their gradual clustering at the specific goal locations, confirming that the robots were indeed picking up and dropping off cargos as expected. In these experiments, the robots sorted two types of cargos, but theoretically, delivering multiple types is possible.

The aim of DNA robotics is not to play games of molecular checkers, of course, but to create machines that can perform ever more complicated tasks, such as synthesizing difficult-to-make chemicals or delivering drugs in response to specific disease signals.

“Many of the potential applications are still science fiction,” Qian says in her email, “[because] there are many practical difficulties that need to be overcome,” such as adding more functional components to the robots.

Nevertheless, says Milan Stojanovic of Columbia University who was not involved in the work, this paper represents, “an important step in a direction that everyone involved in molecular robotics knows we must take.” That is, to make robots that perform complex tasks autonomously. “It brings us one step closer on the arc of progress toward eventually [using DNA robots] in the natural environment.”