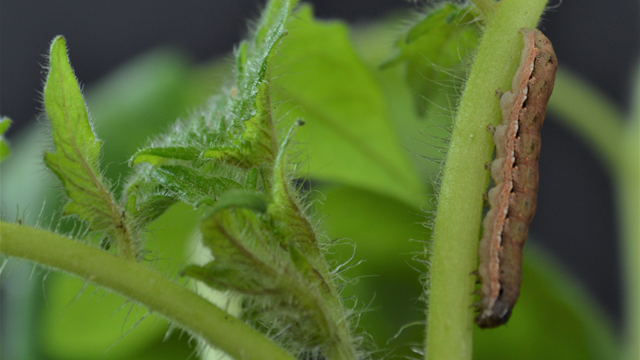 An armyworm on a tomato plantDR. BRIAN CONNOLLYWhen plants come under attack—by a hungry caterpillar, for instance—many of them activate defenses that make their foliage less tasty, less nutritious, or toxic. But until now, scientists weren’t sure what the consequences of these plant defenses were for the caterpillar. In a paper published today (July 10) in Nature Ecology & Evolution, researchers have shown that a tomato (Solanum lycopersicum) plant’s protections can encourage beet armyworm caterpillars (Spodoptera exigua) to cannibalize other caterpillars.

“We’ve known for a long time that herbivores do eat other insects, but so far people studying herbivory have kind of ignored that because it’s a lot easier to put herbivores in a neat bin in which they only eat plants,” says Michigan State University ecologist William Wetzel, who did not participate in the study. “And this is some of...

John Orrock, an ecologist at the University of Wisconsin, Madison, usually studies how animals behave when they’re at risk of being attacked, but became intrigued by the ability plants have to also respond to threats. “Plants aren’t just bystanders,” he says.

One of plants’ reactions is to produce nasty-tasting chemicals, and Orrock was curious how they affect herbivores. “Once the plant changes its chemistry, it occurred to us that the plant might become so untasty that a better item on the menu might be a fellow caterpillar,” he says.

Orrock and colleagues activated tomato plants’ defenses by spraying them with increasing concentrations of methyl jasmonate—a version of a chemical that plants release when they are being attacked that triggers downstream responses such as increased production of toxic metabolites. Then the authors put armyworm caterpillars onto the plants. On the plants that received higher doses of the defense-inducing spray, caterpillars started eating other caterpillars earlier, which led to higher rates of cannibalism.

These plants also lost less of their foliage to the animals. “It’s the timing of when [cannibalism] happens that matters most from the plant’s perspective. While [the caterpillars] are eating each other, they’re reducing the number available to eat the plant,” explains Orrock.

“We know relatively little about the behavioral or ecological mechanisms that allow these induced defenses to be effective,” says Richard Karban, an ecologist at the University of California, Davis, who was not involved in the work. “This is an exciting study because it presents a novel behavioral mechanism to explain how induced defenses might work.”

“Caterpillars whose digestive tracts are nice and full with other caterpillars are less likely to eat as much plant material, so the plant benefits from that perspective, too,” says Orrock.

This work is “a big step forward in our understanding of the complexity of plant-herbivore interactions,” says Wetzel. How these interactions could affect reproduction in the herbivores and impact their offspring are exciting directions for future research, he adds.

Karban raises the possibility that much more is happening with herbivores when plants get defensive. “This is a new behavioral response to induced changes in plants,” he says. “Are there other behavioral responses that herbivores do when their plants change? There might be other novel mechanisms out there.”

“The idea that changes in plant chemistry and therefore plant resistance may change the probability of cannibalism is very original,” says Andre Kessler, a chemical ecologist at Cornell University in Ithaca, New York, who did not participate in the study. But he cautions that the results are not “fully convincing. From the plant side, what I would like to see is actual herbivore damage rather than jasmonate application. Does that same thing [happen] when I have a caterpillar feeding on the plant first and then I put caterpillars on that already damaged plant?”

Orrock acknowledges that future work must explore how relevant these findings are beyond the carefully controlled lab setting. “Follow-up experiments are in the works to address the question of how this dynamic plays out when the herbivores can move between multiple plants. If movement precludes this dynamic or attenuates this dynamic, then it may be less important in the real world,” he says. “Now that we’ve shown that it can happen, we need to figure out how often it does happen.”