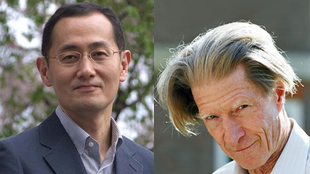 Shinya Yamanaka(left) and John B. Gurdon (right), Nobel Prize.orgJohn B. Gurdon of the Gurdon Institute in Cambridge and Shinya Yamanaka of Kyoto University in Japan have won the 2012 Nobel Prize for Physiology or Medicine for finding that cells of an adult organism—once thought be terminally locked into their developed state—can start anew. The discoveries, awarded the prize this morning (October 8) by The Nobel Assembly at Karolinska Institute in Stockholm, have ignited research in areas ranging from cloning to cancer treatment.

“Gurdon and Yamanaka fundamentally changed the way we all think about the specialized state of cells,” George Daley, director of the Stem Cell Transplantation Program at the Harvard Medical School, wrote in an email to The Scientist. “Collectively they taught us that the identity of a cell can be re-engineered—that an adult cell can be reverted to its embryonic state. This paradigm-shifting concept has opened...

Gurdon, sometimes referred to as the “the godfather of cloning,” published a landmark study in the Journal of Embryology and Experimental Morphology in 1962, showing that implanting the nucleus of an adult frog cell into a frog egg that had had its nucleus removed could result in a functional, cloned tadpole. Though widely scrutinized at the time, Gurdon’s reprogrammed frog paved the way for breakthroughs in cloning, eventually leading to the creation of the now famous sheep, Dolly, in 1996.

Gurdon’s first nuclear-transfer experiment raised the possibility that adult cells maintain the ability to orchestrate embryonic development, despite having already reached their developmental fate. But a question remained about whether intact cells could be reprogrammed to a pluripotent state, capable of giving rise to other cell types of the body.

The answer came more than 40 years after Gurdon’s frog experiment, when Shinya Yamanaka discovered that four genes are capable of reprogramming an adult mouse cell to a cell with embryonic-like flexibility. In the first few days of development, pluripotent embryonic stem cells give rise to all the cells of the body, including those of the skin, intestines, and brain. Yamanaka’s finding showed that intact, adult cells can be rebooted into what are now known as induced pluripotent stem (iPS) cells, which, like embryonic stem cells, can give rise to many different cell types. The 2006 finding, published in Cell, provides researchers with the genetic recipe to generate iPS cells from mature cells in mice and humans.

Since the discovery, other scientists have generated iPS cells from humans—a feat which some argue reduces the need for controversial and difficult to acquire embryonic stem cells. These iPS cells allow researchers to study disease and development in the lab by, for example, generating disease models from the skin of patients with neurodegenerative disorders. The cells are also showing promise for cell replacement therapies to treat various illnesses.

“Induced pluripotent stem cells have already begun to revolutionize medicine,” Paul Fairchild, director of the Oxford Stem Cell Institute, said in an email. They provide “much-needed models of rare and complex disease states while providing sources of cells that may one day be used to replace those that are either worn out or compromised by degenerative diseases.”

The award is a long-time coming, said Magdalena Zernicka-Goetz, of the The Gurdon Institute of Cambridge. “I think we were all expecting it for quite a while,” she said.