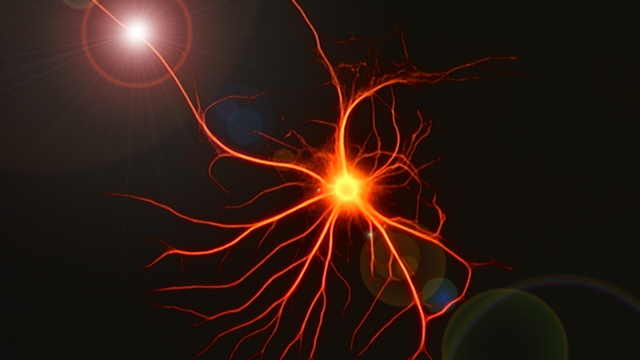 BUCK INSTITUTE FOR RESEARCH ON AGINGCellular senescence, the process by which cells cease to divide in response to stress, may be a double-edged sword. In addition to being an important anti-cancer mechanism, recent studies show it may also contribute to age-related tissue damage and inflammation. A study published in Cell Reports yesterday (January 23) suggests that cellular senescence could be a factor underlying neurodegeneration in sporadic forms of Parkinson’s disease.

“I think the proposition that cellular senescence drives neurodegeneration in Parkinson’s disease and other ageing-related neurodegenerative diseases . . . has a great deal of merit,” writes D James Surmeier, a physiologist at Northwestern University, to The Scientist in an email. “To my knowledge, [this study] is the first strong piece of evidence for this model.”

Cellular senescence may be the basis by which the herbicide and neurotoxin paraquat, which has been previously linked to Parkinson’s disease, can...

The vast majority of Parkinson’s disease cases are sporadic, rather than inherited, and caused by a combination of environmental and genetic factors. Julie Andersen, a neuroscientist at the Buck Institute for Research on Aging, says her laboratory decided to focus on paraquat based on epidemiological evidence linking it to the condition in humans and on lab work showing that mice treated with the chemical suffer a loss of dopaminergic neurons in the same region that is affected in humans. It is an acutely toxic chemical—capable of causing death—and was banned in the E.U. in 2007 over safety concerns, but is still used extensively by American farmworkers.

Paraquat changes astroglia into a state where they shouldn’t be. They actually start harming the neurons . . . This has never been shown before.—Franziska Richter,
Leipzig University

Paraquat’s links to Parkinson’s disease are explained by its ability to induce oxidative stress, to which the dopaminergic neurons that die in the disease are especially vulnerable. In a series of experiments, Andersen and her colleagues show that the chemical can also trigger cellular senescence in human astrocytes in culture, an abundant type of glial cell in the brain. Neurons are typically post-mitotic, but astrocytes can undergo replication in response to injury, explains Andersen, and as animals age, senescent astrocytes may accumulate.

The senescence caused by paraquat led the astrocytes to secrete certain proteins—including pro-inflammatory factors—capable of damaging dopaminergic cells, the main neurons that die in Parkinson’s disease.

The researchers also look a close look at the brain region most affected by the disease—the substantia nigra—in postmortem brain samples of patients. They found that astrocytes possessed elevated markers of senescence and pro-inflammatory factors. 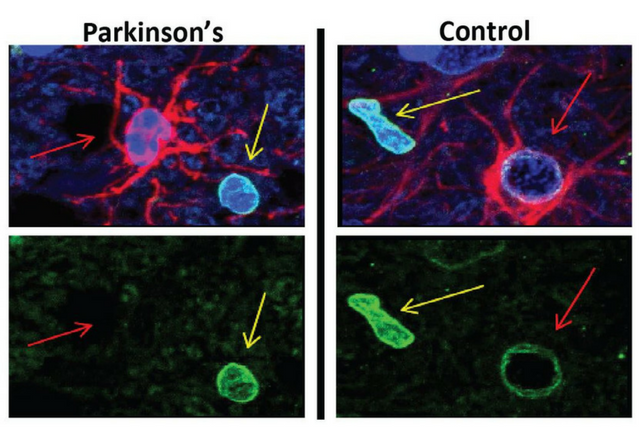 Astrocytes (red) show increased levels of senescence in postmortem brain samples from Parkinson’s disease patients. Senescent cells lose a protein (green) from their nuclei (lower panel)GEORGIA WOODS, BUCK INSTITUTE FOR RESEARCH ON AGINGIn a final experiment, the scientists made use of a mouse model that allows for the selective deletion of senescent cells, and injected them with paraquat over the course of a few weeks. Similar to human Parkinson’s disease, this resulted in the loss of dopaminergic neurons and of motor function. Most interestingly, the researchers were able to halt the progression of these symptoms by clearing all senescent cells from the substantia nigra.

“As far as we know, this is the first time it’s been demonstrated in any neurodegeneration model that ablating senescent cells actually has an effect on disease progression,” says Andersen. This could pave the way towards developing pharmacological treatments for neurodegenerative disease that target senescent cells, she explains. However, “right now, we don’t know specifically what it is about paraquat that is inducing the senescence within the astrocytes,” says Andersen.

The study “bring[s] together a really cool idea—senescence, astroglia, pesticides, Parkinson’s disease,” remarks Franziska Richter, a neuropharmacologist at Germany’s Leipzig University. “People don’t know much about the effect of those toxins on astroglia,” she adds. These cells usually play a supportive role for the neurons around them, she explains, by clearing up cellular debris. What surprised Richter is that senescing astrocytes have a detrimental effect on dopaminergic neurons. “Paraquat changes astroglia into a state where they shouldn’t be,” she says. “They actually start harming the neurons . . . This has never been shown before.”

Richter says the study overstates the importance of paraquat as a risk factor for Parkinson’s disease, stressing that it’s one of many, and that it’s usually a combination of exposures to multiple chemicals, as well as genetic factors, that can drive the disease. “I would not overinterpret this, in terms of what this means for . . . risk in humans, and for treatment in humans.”

As far as we know, this is the first time it’s been demonstrated in any neurodegeneration model that ablating senescent cells actually has an effect on disease progression.—Julie Andersen,
Buck Institute

Félix Carvalho, a toxicologist at Portugal’s University of Porto, is similarly intrigued by the senescing astrocytes. “What is new is really the contribution of the aging astrocytes to the toxicity [of paraquat]” through the secretion of pro-inflammatory factors, he says. In particular, he sees the finding that ablating senescent cells had a neuroprotective effect as promising, suggesting that the research might be applicable to similar diseases, such as Alzheimer’s, in the future. “If we can get rid of those cells that are aged and pro-inflammatory, [perhaps] we can delay or prevent the neurodegenerative path in the cells.”

Surmeier cautions that the rodent paraquat model doesn’t necessarily give us an accurate picture of what is happening in human Parkinson’s disease patients. “Toxin-based models, like the one used here, have proven to be poor predictors of what will alter the course of Parkinson’s disease pathogenesis in humans,” he writes.

“As for any good study, this one raises more questions than it answers,” he continues. For instance, why are dopaminergic neurons particularly vulnerable to astrocytic senescence, or does paraquat affect astrocytes beyond midbrain areas such as the substantia nigra?

Nonetheless, the study provides a testable and intriguing hypothesis to address one of the more fundamental questions about the disease, he adds. “Aging has long been known to be the principal risk factor for Parkinson’s disease, but no one has known why.”