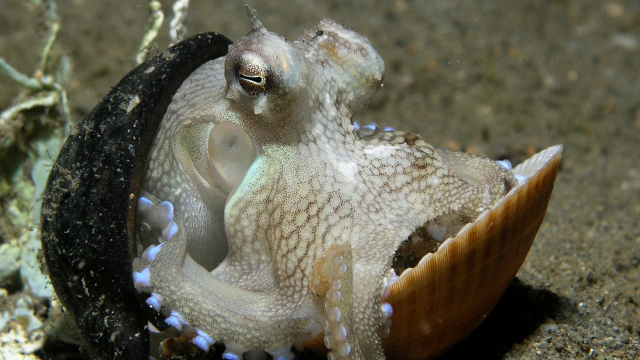 WIKIMEDIA, NICK HOBGOODRNA editing sites are rarely found in the coding regions of most animals’ genomes. But according to a study published today (April 6) in Cell, the genomes of squid, octopus, and cuttlefish contain hundreds of thousands of editing sites, many of which are found in coding regions and are evolutionarily conserved.

The authors showed that recoding events—in which RNA’s adenosine (A) is post-transcriptionally converted to inosine (I), resulting in incorporation of a new amino acid—are often adaptive and contribute to diversity in the animals’ proteomes. And sequence conservation of regions surrounding editing sites has slowed down genome evolution in behaviorally complex coleoid cephalopods.

Coleoid cephalopods “change the amino acid code, so you have a big diversification of the proteome, which you don’t see in any other animals,” Marie Öhman, who studies RNA editing in the mammalian brain at Stockholm University in Sweden and did not...

“When we started looking into this we really didn’t know if this massive recoding was more of a bug or more of a feature,” said coauthor Noa Liscovitch-Brauer, a postdoc at Tel Aviv University in Israel. “What we show here is that it is probably advantageous, and this is something special that only they do.”

“Most organisms have very few functional [editing] sites in coding regions,” said coauthor Eli Eisenberg of Tel Aviv University. “This is why we find it so unusual and surprising that in squid, octopus, and cuttlefish, we see exactly the opposite.”

Liscovitch-Brauer, Eisenberg, and colleagues sequenced DNA and RNA samples from octopus, squid, and cuttlefish—the behaviorally complex coleoid cephalopods—as well as from nautilus, a less-behaviorally sophisticated cephalopod, and sea hare, a non-cephalopod mollusc. They uncovered tens of thousands of editing sites in the coleoid genomes, which are surrounded by sequences predicted to form the secondary structures that editing enzymes recognize. In the nautilus and sea hare, the researchers detected far fewer potential editing sites.

The authors then compared the transcriptome and published genome of one octopus species, Octopus bimaculoides. They identified tens of thousands of editing sites in the coding regions of the animal’s genome, thousands of which were conserved among other coleoid cephalopods.

The team determined that editing events that lead to changes in amino acids were present in much greater numbers in the nervous system than in other tissues from O. bimaculoides. Additional coleoid species also extensively recode messenger RNA (mRNA) in neuronal tissues. The researchers then examined the effects of specific A to I editing events on a potassium channel and showed that recoding can affect protein function.

“There are lots of [editing] sites that are highly conserved between octopus and squid,” coauthor Joshua Rosenthal of the Marine Biological Laboratory in Woods Hole, Massachusetts, told The Scientist. “They’re going so far as to dampen genomic evolution in order to maintain it.”

“The editing is very pervasive, particularly the recoding events,” said Jin Billy Li, who studies RNA editing at Stanford University in Palo Alto, California, and was not involved in the study. “It’s a striking finding, but it’s also a first step. There are just so many questions to ask . . . How does this happen? And what’s the functional consequence?”

The team plans to next explore mechanistic questions about how cephalopods’ editing enzymes work and the effects of RNA secondary structure. Subsequent steps also include an investigation into the potential benefits that might result from extensive recoding—for example, adaptation to changing environments or development of complex behaviors.

“This nervous system connection is really fascinating,” Robert Reenan of Brown University in Providence, Rhode Island, told The Scientist. Reenan studies RNA editing in Drosophila and mammals and did not participate in the work.

“The cephalopods will offer a gold mine in terms of understanding the mechanisms that they’ve adopted to generate this [behavioral] complexity,” said Rosenthal. “I’m certainly not suggesting that editing is the only answer. I think it’s part of the equation, and I think looking how organisms solve problems differently is invaluable.”