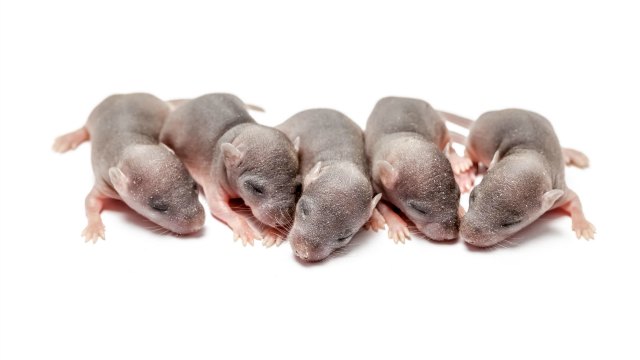 ISTOCK, DENBOMAMice born by Cesarean section grow up to be heftier than their counterparts born vaginally, a new study shows. The result, published today (October 11) in Science Advances, suggests the birthing procedure messes with the mice’s gut bacteria, making them more prone to weight gain.

“C-section leads to increased body weight gain in a mammal model. In humans, there is epidemiological evidence that this happens too,” study coauthor Maria Gloria Dominguez-Bello of New York University School of Medicine tells The Scientist in an email. The results join a mixed bag of studies in both animals and humans that have yet to determine conclusively the health effects of babies’ modes of delivery.

In the paper, Dominguez-Bello and colleagues note that C-section surgery is sometimes a lifesaving procedure, necessary in 10 percent to 15 percent of births to avoid death of the mother, child, or both. C-sections, however,...

Along with a rise in C-sections, researchers are also seeing a rise in obesity, type-1 diabetes, allergies, and other immune-related diseases, suggesting C-sections may be related to such diseases. Previous studies have also looked at the association between C-section birth and poor health in animal models, and found that changes to offsprings’ gut microbes resulting from C-section deliveries can lead to obesity.

The team used genomic techniques to determine which bacterial species lived in the guts of the mice for four weeks after weaning, when they were about eight weeks old. Sex didn’t seem to play as much of a role, as both male and female C-section mice had more Lactobacillus and Erysipelotrichaceae taxa and fewer Bacteroides, Ruminococcaceae, Lachnospiraceae, and Clostridiales, bacterial groups that have been shown to promote leaner bodies in previous studies of mice.

While evidence from mice is relevant, one has to take into account that the issue in humans is hugely more complicated.—Aluisio Barros,
Universidade Federal de Pelotas

“I am ongoingly enthused by the work of the Dominguez-Bello lab to work through the potential differences between offspring born via Cesarean and those delivered vaginally,” Baylor College of Medicine human geneticist Kjersti Marie Aagaard writes in an email to The Scientist. She studies the microbiome and preterm birth in humans, and notes that it is hard to say what the new results mean for people.

The results of microbiome differences between kids born via C-section or vaginally have been mixed. Some studies, including one by Aagaard and colleagues, have shown no long-term impact of birthing method at all. The new work, Aagaard says, is “an interesting observation in mice worthy of further study.”

Epidemiologist Aluisio Barros of the Universidade Federal de Pelotas in Brazil notes in an email, “While evidence from mice is relevant, one has to take into account that the issue in humans is hugely more complicated.” Two factors that make human baby microbiomes harder to understand are breastfeeding and the use of antibiotics perinatally, the period spanning from mid-way through to pregnancy to four weeks after birth. The time it takes mice to develop is shorter, so a key question is whether these differences in microbiota persist over years, he says.

“It is important to take this as one step further into gathering evidence of the impact of C-section,” Barros says. He points out that it is important to remember that studies in humans are far from conclusive in finding an association between C-section and increased body mass index. “Negative studies are much more likely to have never been published,” he adds, “so there must be a few studies with negative results that never became public.”

In their paper, Dominguez-Bello and colleagues note a few limitations to the study. One is that they did not use perinatal antibiotics, but the team expects that antibiotics, combined with C-section, could contribute to the weight gain. Another issue is how the C-section mice are raised; they were fostered by mice that gave birth vaginally. The team is doing experiments now to look at the effects of this fostering, as well as what happens when a microbiome typical of vaginally born mice is restored to the C-section mice.

“Now that we know causation, we are exposing C-section born mice to maternal microbes normally encountered at birth. We will be able to determine if the microbes restore normal development and find the related human microbes,” Dominguez-Bello says. That information could lead to a swab for C-section human babies, a technique she and collaborators have already tried, with some success. The key would be finding the right bacteria to add to a baby’s microbiome.

Editor’s note (October 11): The subheading of the article was updated to clarify the link between microbiome changes and less weight gain among mice born vaginally.