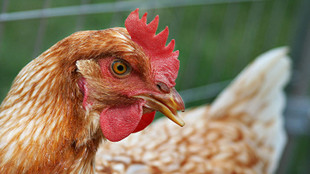 Live market chickens have been implicated in the H7N9 outbreak.WIKIMEDIA, THEGREENJOn March 31, Chinese Center for Disease Control and Prevention announced that scientists had isolated a novel influenza A virus from four patients in eastern China, three of whom had died. As of yesterday (April 25), the confirmed cases in China has risen to 108 including 22 deaths, according to the World Health Organization’s official count, and an additional person in Taiwan who had traveled from China has been diagnosed with the virus, identified as H7N9.

Virologists and epidemiologists worldwide have sprung into action trying to understand and control the outbreak. Chinese researchers have posted the viral sequence in an open-access repository and are sending samples of the live virus to labs around the globe for study.

Encouragingly, H7N9, which has never before infected humans, is not thought to spread readily between people. There have been some clusters...

But that’s where the good news ends. The virus appears to be more virulent than past H7 avian flu viruses in past outbreaks, which have caused conjunctivitis but have only been blamed for one death. Furthermore, this virus appears to be spreading from its hosts to humans unusually readily.

“The virus does appear to be more infectious for humans than other avian viruses in the past, including H5N1,” said virologist Richard Webby, who heads the WHO Collaborating Center for Studies on the Ecology of Influenza in Animals and Birds at St. Jude Children’s Research Hospital in Memphis, in an email to The Scientist. “In my mind, this does create some urgency.”

Because it does not appear to cause severe symptoms in animals, identifying the sources of H7N9 has been difficult. The virus appeared to be an avian flu, but no one was seeing the dramatic upticks in sick poultry that have come with past bird flus, such as H5N1. And early reports indicated that some victims did not have a demonstrated link to birds.

A New England Journal of Medicine paper that came out earlier this week (April 24) pointed the finger more firmly at birds, showing that over three-quarters of 77 infected people who were able to give full data had been in contact with chickens, but direct evidence blaming poultry was still lacking, the authors noted.

A breakthrough came when a group of Chinese scientists published a paper in The Lancet yesterday (April 25) describing a direct genetic link between a human H7N9 case and live market poultry. The researchers tested birds from six markets located close to documented H7N9 cases. While cloacal swabs from neither quails nor ducks at the markets turned up H7N9 virus, samples from two out of five pigeons and 4 out of 20 chickens tested did. Through gene sequencing, the researchers showed that one of the four human H7N9 isolates was highly genetically similar to a virus found in market poultry. The patient linked to the poultry sequence, who is now dead, had reported buying live poultry at a market prior to becoming ill.

But Webby said that more research is required to show whether the market birds are the only source of disease. “To me, the major question that has to be answered is how widespread this virus is in animal hosts in China,” he said. “This is key to control. If we don’t know what animal hosts it is in, there is no way to reduce the amount of virus in the environment and human infections will continue.”

It’s in the genes

A decade ago the Chinese government delayed reporting the first known cases of SARS to the public, then underplayed the epidemic’s seriousness, but this time around, scientists worldwide agree that the country has responded quickly and openly to the H7N9 outbreak. According to an email sent to The Scientist by Yuelong Shu, head of the Chinese National Influenza Center on Saturday (April 20), he and colleagues already had or were planning to disseminate the virus to 12 labs worldwide. Those labs were sharing the virus with still more collaborators studying the virus’s pathogenicity, virulence, and transmissibility, while working to improve diagnostic tests and design vaccines.

“The speed of the sharing of information by China was exemplary,” said John McCauley, who studies influenza viruses at the National Institute for Medical Research (NIMR) in the UK, in an email to The Scientist. “This has enabled the world to get prepared.”

The first information made available to researchers internationally was the genetic sequences of the viruses isolate from the outbreak’s first three victims. The Chinese National Influenza Center (CNIC) received throat swabs from the first patients on the evening of March 24, according to Shu, and within days, scientists at the center had isolated the virus. On March 29, the full genomes were posted to the open-access repository GISAID.

The viral sequences allowed labs around the world to start developing tests for the virus, and have also given an early peek into the pathogen’s biology. For example, an analysis of the first three sequences, published by a team of Chinese scientists in the New England Journal of Medicine on April 11, revealed that the virus’s virulence genes are most closely related to those of other bird flu viruses, and H7N9 appears to have sequences from multiple viral ancestors. The sequences also indicated that the virus, like many flu viruses today, is resistant to adamantine, a hydrocarbon derivative that prevent flu virus from releasing its genes in a host cell. Most isolates were susceptible to neuraminidase inhibitors, however, which work by preventing the virus from budding out of host cells.

The analysis further uncovered mutations in the viruses that facilitate their spread to humans, as well as a mutation that may help explain its virulence in fatal cases. Flu viruses bind to cells using a molecule call hemagglutinin (HA) that binds to sialic acid, found on the surface of cells. H7N9’s HA sequence indicates that the virus has an elevated affinity for receptor with sialic acid in the human upper respiratory system, which could facilitate an infection taking hold. Furthermore, the authors noted a mutation in the RNA polymerase gene PB2 that could speed viral replication in a human host, which have a lower body temperature than chickens.

Another study, which included sequences from some important genes from a fourth virus, was published in Eurosurveillance the same day by a team of researchers led by Masato Tashiro the National Institute of Infectious Diseases in Japan, and it came to similar conclusions, also noting mutations that could increase infectivity in humans and speed viral replication.

Scientists in the Netherlands have compared the current outbreak to an H7N7 outbreak that swept through the Netherlands in 2003, spreading to poultry on 255 farms, sickening 89 people, and killing one man, a veterinarian. Dutch researchers published a report in Eurosurveillance last week (April 18) noting that the virus that killed the Dutch veterinarian also had the same PB2 mutation that sped replication in human hosts.

Marion Koopmans, an epidemiologist at Erasmus Medical College and at the National Institute for Public Health and the Environment in the Netherlands, said that there are two conceivable explanations. The more alarming possibility is that the mutation arose in bird populations and humans are being infected by an already-virulent strain. Alternatively, the mutation could have arisen multiple times in unlucky human victims of the virus, meaning that the virus would become more virulent after infecting humans, an explanation Koopmans considers more likely.

Live virus in the lab

In addition to sharing the genome sequences as they became available, the Chinese also began sending live samples to a network of WHO Global Influenza Surveillance and Response Team labs just days after announcing the outbreak, and the government continues to send it to labs upon request. At the beginning, CNIC largely sent out a viral strain called A/Anhui/1/2013(H7N9), which was isolated from one of the three original cases and was fatal, but says that it will honor specific requests for other strains as well.

Most of the labs that have received the live virus are using it to validate detection methods, but some labs are going further. Tashiro, for instance, said he plans to infecting ferrets, mice, chickens, mini pigs, and other animals to study how the virus spreads. Others are doing similar experiments with ferrets or primates, hoping to see whether the virus spreads through aerosolized droplets.

Frank Plummer, scientific director of Canada’s National Microbiology Lab in Winnipeg, said on Wednesday (April 24) that his group had received live virus from the US Centers for Disease Control and Prevention (CDC) and was expecting more from China. His lab will explore the possible range of hosts the virus can infect, focusing on birds and pigs, in hopes of shedding light on the identity of the virus’s possible hosts.  “We have a unique capability in that we’re co-located with the main agricultural infectious disease lab,” which will make testing livestock easier, said Plummer. He also plans to test the virus in non-human primates in hopes of better characterizing its effects on humans.

And many labs, including Webby’s, Plummer’s, Tashiro’s, the CDC, and more, are beginning to work on generating a vaccine, a process that will take many months. Despite the widespread attention to H7N9, the work is not wasted effort, said Webby. “Having multiple groups do similar things gives us much more confidence in what is seen than if one group did it.”