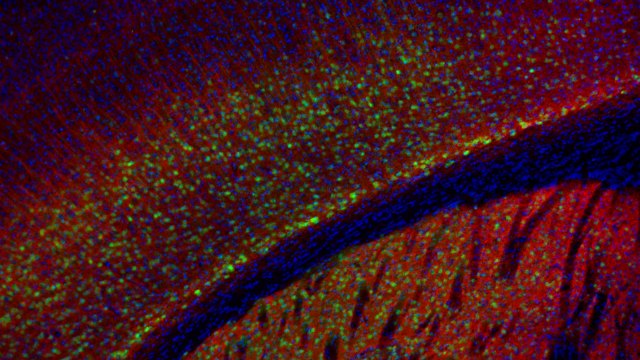 Transgenic mouse brain tissueMIKE MICHAELIDES, NIDAA popular chemogenetic technique for controlling cells does not operate in vivo in the way scientists had assumed. Reporting in Science yesterday (August 3), researchers show that CNO, a drug used in the DREADDs method (designer receptors exclusively activated by designer drugs), is not actually responsible for the effects scientists observe. Rather, it’s clozapine, a metabolite of CNO with numerous cellular targets, that binds the receptors.

These results make it imperative for researchers to do proper controls with clozapine, and indicate that they should change their protocols altogether. “I’m glad I don’t own stock in CNO,” says Scott Sternson, a neuroscientist at the Janelia Research Campus. “There’s no reason to use CNO anymore.”

Although it may be the end of CNO in these studies, coauthor Mike Michaelides of the National Institute on Drug Abuse tells The Scientist the results don’t necessarily mean...

Clozapine was our positive control. . . . It bound DREADDs better than any other endogenous receptor. —Mike Michaelides,
NIDA

The idea behind DREADDs is that a receptor is introduced into cells that will only respond to a particular drug, in this case CNO. Likewise, the drug will only target that receptor. The technique allows researchers to control neural activity. Michaelides says that although it’s a commonly used method, no one had done the critical experiments to observe CNO interacting directly with DREADDs in vivo.

So his team injected CNO into rodents expressing DREADDs and found that rather than the designer drug, CNO’s metabolite clozapine was the molecule crossing the blood brain barrier and binding to the designer receptors. The finding means DREADDs are a misnomer, as they are neither exclusive nor activated by a designer drug.

Michaelides says that because clozapine has a high affinity for DREADDs, using it at low doses makes it less likely to produce non-DREADD-mediated effects. “Clozapine was our positive control. It performed superior” to CNO, he says. “It bound DREADDs better than any other endogenous receptor.”

His findings build on previous studies questioning the mechanism of the DREADD technique. In March, Jessica Raper of Yerkes National Primate Research Center and colleagues reported that when injected into monkeys, CNO converted into clozapine at levels sufficient to activate DREADDs (although the receptors were not present in her animals). The result “lines up nicely” with what Michaelides’s team published this week, she says. 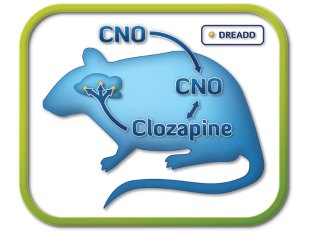 MARC RALEY, NIDA“I do think the technology has a future, but now this really is going to make people open their eyes and just make sure that they are doing the right controls and using this appropriately,” says Adriana Galvan, Raper’s collaborator at Emory University School of Medicine. Specifically, the control experiment would be to examine low doses of clozapine in the absence of the designer receptors.

Clozapine has the advantage of being an already-approved drug, says Michaelides, used as an antipsychotic. If DREADDs were to be developed therapeutically, much of the safety data would already be known.

Sternson counters that the disadvantage of clozapine is its potency and complex pharmacology, given that it binds numerous targets. “I think people will just look askance at using clozapine. . . . Ideally, one would have a receptor with low endogenous activity and low constitutive activity.”

Sternson says there are alternative designer drugs that might fit the bill. He’s also developed designer receptors that are ligand-gated ion channels, unlike the G-protein coupled receptor used with CNO.

Michael Gold, a pain researcher at the University of Pittsburgh, says there are bigger problems with DREADDs than CNO and clozapine. “They’re not nearly as innocuous as one would predict,” he says.

Last year, Gold’s team reported on its first foray into DREADDs, in which the researchers expressed the receptors in mouse nerve cells. To their dismay, they found that even in the absence of CNOs, the receptors had profound effects on the cells’ physiology—causing disruptions in normal signaling simply by being present.

“I think it’s a real concern,” he tells The Scientist. “People continue to use these tools under the assumption they are not having off-target effects.” He says his results “condemn” DREADDs as a strategy and his lab has since dropped them. “We’re waving the red flag.”