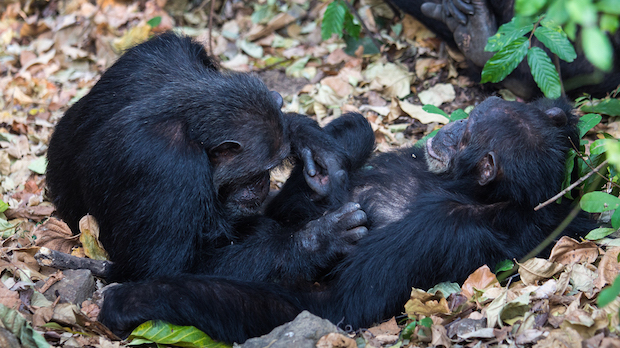 STEFFEN FOERSTERSocial interactions play a leading role in determining the content of the chimpanzee microbiome, suggests a study published today (January 15) in Science Advances. The more chimpanzees interact with others in their group, the more uniform the group’s collective microbiome is, and the greater number of species each individual’s microbiome has.

Microbiologists have often assumed that animals and humans primarily acquire their microbiomes from their mothers, a phenomenon called vertical transmission. But “chimpanzees within a maternal line did not share more similar gut communities than unrelated socially interacting chimpanzees,” said paper coauthor Andrew Moeller, who studies the evolution of the vertebrate microbiome at the University of California, Berkeley.

“This paper provides exciting evidence that social contact has a stronger effect on the chimpanzee microbiome than vertical transmission,” Rob Knight of the University of California, San Diego, wrote in an email to The Scientist.

“The contribution that you can get from these long-term field studies is a level of observational detail that is really actually just impossible in humans,” said Jenny Tung, a Duke University assistant professor who was not involved in the study but who helped show that baboons share microbiota through social interactions.

In Gombe, chimpanzees interact most with one another during the wet season, when they forage together. In the dry season, chimpanzees spread out and forage alone or in smaller groups. The researchers found that in the high-interaction wet seasons, the chimpanzees had more similar microbiomes to each other than they did during the dry seasons. Changes in diet between seasons could not account for these microbiome shifts. The chimpanzees could be passing microbes back and forth between each other by touching one another or by coming into contact with others’ fecal matter, the authors said.

At times when the average sociability of the chimpanzees was high, individuals also tended to have a greater variety of microbial species in their fecal matter than at times when sociability among the group was low. Chimpanzees’ microbiomes were no more similar to those of their maternal relatives than to those of other members of their social group.

The findings indicate that microbiomes are not self-contained between individual chimpanzees and passed down between parents and offspring. Rather, chimpanzees have a “pan-microbiome,” a population of microbes living in their guts that evolves in the context of a whole group of chimpanzees. Member species of a vertically inherited microbiome could easily face bottlenecks or be wiped out by accident if, say, a mother lost certain species or if they didn’t jump from the birth canal to the offspring. But with the pan-microbiome, such random losses are less important. Even if a baby chimpanzee doesn’t get a full complement of microbes from its mother, it can later pick up missed ones via social interaction. Having a large pool of connected hosts may allow the chimpanzee microbiome to remain highly diverse.

Moeller speculated that the ability of maintain a rich microbiome could have even been a benefit of the evolution of social animals. Traditionally, researchers have seen the evolution of sociality as coming with the spread of pathogens. “Now that we know that most of the microbes in the body are at least commensal and maybe even mutualistic, it might be that there are benefits to sociality, that transmission of microbes is actually a benefit of sociality instead of a cost, depending on the circumstances,” he said.

However, it is not yet clear whether social microbial transmission is evolutionarily advantageous. “You could also argue that lack of social contact would lead to more differentiation of microbiomes, leading to higher beta diversity and a more robust population overall,” suggested Knight. While diverse microbiomes have been associated with good health and adaptation to new foods, he added, “the situation is considerably more complex than higher counts of species or strains always being better.”

Moeller is currently sequencing the microbiomes of a diverse group of mammals with different degrees of sociality, which could help the researchers determine whether sociality has systematic effects on the microbiome.

Researchers also hope to figure out the role that sociality has in transmitting the human microbiome. Knight and his colleagues have shown that people in a relationship who live together can have as similar microbiomes as an offspring-parent pair. Human genetics, diet, antibiotic use, and hygiene also likely shape the microbiome.

“Humans have such heterogeneous and diverse environments,” said Tung. “What I had for dinner last night might be completely unlike what my colleague next door to me had for dinner last night, even though geographically we live in the same place. That’s not going to be true in general for primate populations . . . That may be part of the reason that we see this social signal pop out so clearly.”