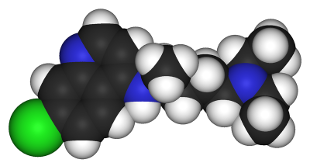 WIKIMEDIA, BENJAH-BMM27 Chloroquine, a 4-aminoquinoline, is a weak base with anti-inflammatory proprieties already used to prevent and treat malaria. The drug has protective effects against dengue infection in monkeys and inhibits replication of the virus in infected Vero cells. According to researchers in Brazil, chloroquine appears to also protect against Zika virus infection in various cell types in vitro. The team published its results last week (May 2) in a bioRxiv preprint.

Amilcar Tanuri at the Federal University of Rio de Janeiro and colleagues tested the effects of chloroquine in different Zika virus–infected cell types, observing each culture for five days. Flow cytometry and immunofluorescence staining revealed that chloroquine at 25 and 50 μM reduced the number of Zika-infected Vero cells by 65 percent and 95 percent, respectively. When tested in human brain microvascular endothelial cells (hBMEC), which are often used to model the blood-brain barrier, chloroquine protected...

“Chloroquine . . . is not an antiviral drug as it acts on the cell and not on the virus,” Tanuri told The Scientist.

Zika is known to target neurospheres and brain organoids; viral infection is associated with microcephaly and other abnormalities of the central nervous system in mice and humans. In the present study, Tanuri’s team found that chloroquine treatment of Zika-infected mouse neurospheres enabled these cells to differentiate as usual, suggesting that the drug can rescue the neurite extension phenotype.

Although chloroquine-mediated inhibition of viral infection can occur in both early and late stages of the viral replication cycle, the team observed that adding chloroquine at 30 minutes to 12 hours after infection reduced release of Zika virus (nine to 20 times compared with untreated cells). The drug did not reduce viral production when administered 24 hours after infection. This indicated that chloroquine is most effective in the early phase of Zika infection, when the virus enters the cell, the researchers noted.

David O’Connor, a professor of pathology and laboratory medicine at the University of Wisconsin–Madison who was not involved with the study, noted that regulatory agenices have already deemed chloroquine safe for use in pregnant women. “There will be a lot of enthusiasm for evaluating different interventions for use in pregnancy, but determining their safety and effectiveness will be time-consuming and could expose pregnant women to risk,” he wrote in an email. “If chloroquine is even partially effective at reducing the risk or severity of Zika virus infection during pregnancy, its proven safety could make it extremely valuable.”

Dosing remains a hurdle, however. The half maximal effective concentration of chloroquine that protected 50 percent of cells from Zika-induced death was between 9.82 and 14.2 μM, depending on the cell type, the Federal University team showed. (Chloroquine is sometimes administered in high concentrations—250 and 500 mg—to pregnant women who have lupus or rheumatoid arthritis.)

It is not yet known to what extent reduction of the virus in cells might impact the development of microcephaly. Paolo Zanotto of the University of São Paulo, who works on dengue and zika but was not involved in the study, wrote in a Facebook message that preclinical studies using animal models of Zika virus infection will be required to test the effects of chloroquine in vivo.