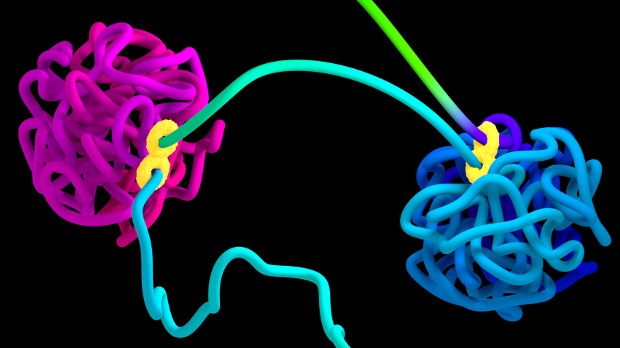 Compared to its sequence, relatively little is known about the structure of the human genome, which enables more than two meters of chromatin to fit inside the nucleus. Chromosomes are thought to be organized into loops that bring together distant DNA elements—genes, promoters, and enhancers. These chromatin loops are thought to help facilitate gene regulation.

Now, researchers at the Baylor College of Medicine’s Center for Genome Architecture in Houston, Texas, have developed a mathematical model using the binding pattern of a single protein to DNA to predict the looping organization of the human genome. The model helped the team predict the results of its CRISPR-based experimental modification of some of these protein-binding sites in human cells. The team’s results, published this week (October 19) in...

“What I find particularly remarkable about this study is the truly multifaceted approach in which abstract mathematical descriptions . . . are used to generate concrete, experimentally testable predictions of biological importance,” said Olga Dudko, a biophysicist at the University of California, San Diego, who was not involved in the study.

“The authors used a rigorous approach of careful mathematical modeling and experiments to show how chromatin loops may form in vivo,” said Frank Alber, who studies the 3-D organization of genomes at the University of Southern California in Los Angeles, but was not involved in the work.

Baylor’s Erez Lieberman Aiden, Suhas Rao, and their colleagues recently created the first relatively high-resolution, 3-D map of the human genome, which included almost 10,000 chromatin loops. The team found that these loops formed between pairs of DNA binding sites for the CTCF protein. Irrespective of loop length, these binding sites typically point toward one another on opposite DNA strands, the researchers found, suggesting that CTCF is part of a complex that loads onto DNA and facilitates the organization of the genome into looped configurations.

“The 3-D maps we get from our experiments are rich with information on how the genome is folded, but the mechanisms that establish these structures are often not obvious,” said Aiden.

The team found that its experimental 3-D maps were inconsistent with several previously proposed models of genomic organization. First, the researchers observed that, in vivo, chromatin tends to be highly flexible at the kilobase scale, conflicting with a previously hypothesized higher order structure called the 30 nanometer (nm) fiber. While prior publications have indirectly shown that chromatin does not form the 30 nm fiber in vivo, according to Dudko, the current study may be the most convincing evidence yet that the 30 nm fiber is not a native mammalian chromosome structure. Still, this latest modeling work does not rule out that this configuration may exist as a transient state during some cellular processes, she added.

This observed flexibility opened the possibility that a CTCF-containing complex can bind DNA and create an initial short loop that is then grown by extrusion, like pulling on a shoestring loop to make it longer. But the team’s 3-D maps were also inconsistent with the prominent hypothesis that, after the CTCF complex binds DNA, the DNA randomly diffuses through space until two DNA-bound CTCF proteins meet and form a loop. Rather, the team’s modelling results were consistent with another published hypothesis of extrusion, in which CTCF complexes bind DNA randomly and then extrude the DNA through the complex.

Guided by their previous results, the researchers reasoned that CTCF binding at the protein’s paired binding sites may arrest the DNA extrusion process. So they added experimental data describing the position of CTCF binding sites to their simulations. The resulting model recapitulated all available experimental data, including detailed 3-D maps showing how frequently any two pieces of DNA bump into each other in vivo. “[These features and properties] alone could recapitulate the 3-D structure that we see from our experimentally derived 3-D map,” said study coauthor Adrian Sanborn of Stanford University.

“This model makes a somewhat strong assumption that there must be a tightly regulated biological mechanism—as opposed to a diffusion mechanism—that is responsible for bringing the loop anchors together,” said Dudko.

“The finding that CTCF sites at anchor points tend to be convergent is a very important clue as to the mechanism of loop formation, and this finding is a strong indication of a tracking mechanism as postulated by the extrusion model,” Kim Nasmyth of the University of Oxford, who initially proposed the DNA extrusion theory, wrote in an email to The Scientist.

Putting their model to the test, the researchers tried both deleting certain CTCF binding sites and adding new ones to human cells using CRISPR. The results of all 13 genome-editing experiments were consistent with the model: new chromatin loops and other structures were formed or deleted as predicted.

“Their findings provide further evidence that it is the loops . . . that play the role of the spatial confinements which, in turn, help the cell achieve astonishingly high rates of remote genomic associations, including those of enhancers and promoters,” said Dudko.

The next step, added Nasmyth, is to better understand the functions of chromatin loops. “It’s becoming clear that these loops exist, but we do not know enough about the control of transcription by enhancers to understand which kinds of loops are important, if needed they are,” he noted.