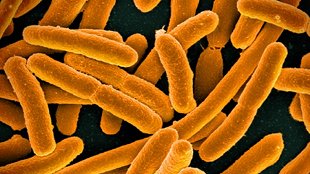 WIKIMEDIA, NIAIDCircadian clock machinery from cyanobacteria has been successfully reconstructed inside Escherichia coli bacteria, which do not have a natural day-night cycle, according to a paper published today (June 12) in Science Advances. The E. coli cells exhibited 24-hour-long repeating oscillations in both transcription of a reporter gene and phosphorylation of a key clock protein. The results serve as a proof of principle that engineering such a synthetic circadian circuit is possible.

“The exciting thing is that this is really the first step towards using this wonderful protein clock in synthetic biology to actually do something, or produce something,” said circadian biologist Susan Golden of the University of California, San Diego, who was not involved in the work.

The project was borne out of a general interest in engineering cells that can measure time, explained study coauthor Pam Silver of Harvard Medical School. “It was really a ‘Gee,...

But beyond mere tinkering, the potential applications for engineered cells that exhibit diurnal rhythms are many. For instance, synthetic organisms could be designed to produce and secrete drugs at a certain time each day. Industrial fuel-producing microorganisms could be engineered to maximize harvesting of the sun’s energy. And engineered gut microbes could even correct shift work- or jetlag-induced dysbioses, which are associated with glucose intolerance and obesity, among other things.

To create E. coli with an artificial circadian rhythm, Silver and her colleagues turned to cyanobacteria—the only bacteria that have natural diurnal cycles. In these organisms, three proteins—KaiA, KaiB, and KaiC—constitute the minimal molecular clock. During the day, KaiC becomes phosphorylated with the help of KaiA; at night, KaiC is dephosphorylated as KaiB antagonizes KaiA. Remarkably, in a test tube, these three proteins alone can display this rhythmic phosphorylation and dephosphorylation.

“It’s very simple, so it’s a really nice system to try to test and see if we could build a synthetic circadian clock in another organism,” said postdoc Anna Chen of the University of Texas at Austin—a former graduate student in Silver’s lab—who led the work.

Chen, Silver, and their colleagues expressed KaiA, KaiB, and KaiC from the cyanobacterium Synechococcus elongatus in E. coli and showed that, just as in a test tube, KaiC phosphorylation levels oscillated with a 24 hour periodicity. The team then took things a step further and actually plugged the clock into a process: transcription. Phosphorylated—but not unphosphorylated—KaiC interacts with a protein called SasA. The team thus engineered versions of KaiC and SasA that, when bound together inside the E. coli, would drive transcription of a fluorescent reporter protein.

“Previous work had reconstituted the post-translational phosphorylation rhythm in a test tube. But, this [new work] includes the transcriptional component in an organism,” said neuroscientist Amita Sehgal of the University of Pennsylvania, who was not involved in the work. Sehgal added she was “surprised that, even with the limited components used, the period of the transcriptional rhythm was [close to] 24 hours, and persisted for three days.”

Chen explained that the loss of the rhythm after three days maybe in part because the cells begin to enter a stationary phase, but also because they “loose synchrony over time.” The cyanobacteria has additional mechanisms that maintain synchronicity, explained Chen, “but those mechanisms don’t natively exist in E. coli.”

Incorporating such synchronicity-maintenance mechanisms in the engineered E. coli is one way the system could be improved, said Silver.

Golden concurred. “Now they’ve shown they can do it, it can be modified and tweaked.”