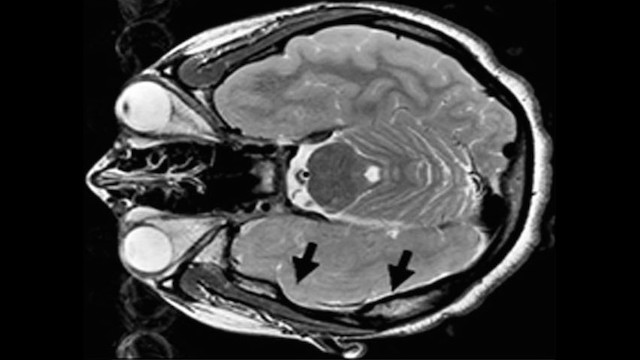 Arrows indicate the brain regions where seizures originate in one of the patients included in the study. LIU ET AL.

In the suprachiasmatic nucleus, the brain’s central pacemaker, CLOCK (circadian locomotor output cycles kaput) is a transcription factor that plays a crucial role in regulating circadian rhythms. However, this protein also appears outside this region, in the cerebral cortex, where its function is still unclear. A new study, published today (October 11) in Neuron, suggests that the loss of CLOCK in the cortex is associated with certain severe forms of epilepsy.

Prior studies have provided hints of a link between epilepsy and our sleep-wake cycles. For example, researchers have observed that seizures tend to follow circadian rhythms, and that some individuals are more susceptible to seizures during sleep. Others have reported, based on animal experiments, that changes in the expression of clock genes, such as Bmal and...

Although they ultimately arrived at a circadian gene, Judy Liu, a neurologist and professor at Brown University, and her colleagues had not set out to study it. Instead, she says, “we were trying to figure out what’s different from epilepsy tissue compared with normal brain.”

Liu and her team first probed the molecular changes that occur in the brains of children with two types of severe epilepsy—one caused by focal cortical dysplasia, a developmental malformation in the cortex, and another caused by tuberous sclerosis complex, a genetic disorder that can lead to benign tumors in the brain. To do so, they compared the gene expression in various regions of the brain where the seizures originated with healthy tissues from adjacent areas. Because all samples were removed from patients during surgery, the researchers couldn’t compare them to brain tissue from healthy controls.

The biggest difference the team observed was lower Clock expression in epileptogenic tissue compared with healthy neighboring brain areas. “It seems that CLOCK is the signature of epilepsy, not necessarily the developmental disorder,” Liu tells The Scientist.

What’s interesting [is] that this gene is known to be expressed in the neocortex, but it’s not known what it does there.—Omar Ahmed,
University of Michigan

To try to get at the mechanism behind this observation, the team genetically engineered mice to lack Clock genes in specific populations of neurons. This revealed that removing Clock from excitatory—but not inhibitory—neurons in the cortex made neural circuits more excitable and the animals more prone to seizures during sleep.

“[This study provides] an intriguing take on the role of CLOCK and epilepsy,” says Omar Ahmed, a neuroscientist at the University of Michigan who did not take part in the work. “What’s interesting [is] that this gene is known to be expressed in the neocortex, but it’s not known what it does there. . . . CLOCK mostly carries out its circadian function in the [suprachiasmatic nucleus].” Because the control tissue also came from patients, one important question to address, he adds, is whether Clock expression is reduced in brain areas where seizures occur or if it has, instead, gone up in nearby healthy tissue.

Christophe Bernard, a neuroscientist at Aix-Marseille University in France who also was not involved in the research, says that another outstanding issue is whether it really is the decrease in Clock expression that directly leads to seizures in humans. “Maybe the gene has [changed] the brain and the seizures are the result of the misconstruction, not of the downregulation of the genes,” he tells The Scientist.

“The major caveat of this story is the lack of causality,” Bernard says. “The [epilepsy] literature is full of people who have identified the downregulation of something and proposed that this is the target [for treatment], but it always fails.”

Ahmed adds that figuring out whether changes in Clock lead to more seizures or vice versa will be important when considering potential therapeutic interventions. Although it’s possible that both effects might be occurring, “if it the causality [is that the] downregulation of Clock causes seizures, then we have a gene that you can target.”

To further understand this newly observed link between a circadian gene and epilepsy, Liu’s team plans to conduct additional investigations—for example, looking into the possible epilepsy roles of the genes whose expression Clock regulates. The researchers also intend to examine whether small molecule modifiers of CLOCK activity can reduce seizures in mice.

For now, Liu says, her best guess for why Clock expression is decreased in patients is that abnormal neuronal activity downregulates the gene, and that leads to more abnormal activity, creating a vicious cycle. If this is the case, she adds, “it implies that there is a window that we have to actually fix the circuit before things get really bad.”