A stained cluster of cancer cells passes through a 7-μm channel in vitro.PNAS, S.H. AU ET AL.Clusters of circulating tumor cells (CTCs) may play a larger role in cancer metastasis than previously thought. Researchers at Massachusetts General Hospital have now shown that these clusters can squeeze through square microfluidic channels just 7 microns (μm) across. The team’s findings were published today (April 18) in PNAS.

“There’s a common belief in the field that even single CTCs traversing through capillary beds would destroy the majority of them through physical shearing,” Edward Cho of Spectrum Genomics wrote in an email to The Scientist. This study “demonstrates new evidence that clusters of CTCs may have a mechanism to prevent shearing as they traverse through small capillaries, and thus may have greater metastatic potential than previously thought,” added Cho, who was not involved in the work.

Most cancer deaths are caused by tumors metastasizing to different organs. Traditionally, clusters of these cells were thought to be too large to pass through capillaries, instead getting stuck and forming blood clots. Yet, more recently, these clusters have been detected in blood drawn from cancer patients. “If they’re so big, how can we find them in blood collection in the arm?” study coauthor Mehmet Toner of Massachusetts General Hospital told The Scientist.

To investigate, Toner and his colleagues created 7-μm-wide microfluidic channels designed to mimic the mechanical properties of human capillaries, and filmed clusters of CTCs—derived from patient blood samples and from cell lines—as they moved through the channels.

A cluster of four tumor cells elongates and compresses as it travels through a 7-μm microfluidic capillary.PNAS, AU ET AL.

As the videos revealed, clusters of 10 to 20 cells loosely disassembled as they entered the channels and moved through the tiny passageways, single-file—like a crowd of people holding hands as they squeeze through a narrow alleyway in a line formation. The cells were “squeezed beyond belief,” said Toner. Upon exiting the channel, the CTCs reassembled into nonlinear clusters.

Next, the researchers sought to validate their model in vivo. They injected human CTC clusters into the bloodstreams of 3-day-old transgenic zebrafish embryos. Zebrafish are a good model for humans because their capillaries are almost identical to those of humans in size and pressure, Toner explained. Again the researchers found that the CTC clusters could traverse the fish capillaries.

Clusters of tumor cells (green) moving through a transgenic zebrafish blood vessel (arrows indicate direction of flow through dorsal aorta, caudal vein, and pivot point)PNAS, AU ET AL.Finally, Toner’s team showed that these CTC clusters could be broken up with certain drugs. The researchers treated clusters with either FAK inhibitor 14, a molecule overproduced by many tumors that inhibits a protein involved in cell-cell adhesion, or the chemotherapy drug paclitaxel, which also weakens cell junctions. When the researchers injected the treated clusters into the microfluidic channels, the clusters broke up into smaller clumps or single CTCs, suggesting a possible avenue for treatment.

“It’s a very interesting paper,” Sanjiv Sam Gambhir of Stanford, a professor of radiology and nuclear medicine who did not take part in the study, told The Scientist. “It’s not known how these clusters of cells end up being the bad [guys] in terms of metastasis. This work very nicely—both through computational modeling, as well as microfluidic devices and zebrafish models—attempts to elucidate this finding.”

However, Gambhir added, the results are still based on models. “Unless you’re doing this in actual human capillaries, you still can’t prove this is what really goes on in humans,” he said.

Missing from both the in vitro and zebrafish models was information on how CTC clusters behave in branching capillary beds like those seen in human capillaries, Cho noted. Cho’s team and others have previously shown that CTC clusters may also become stuck in veins, creating clots that can be fatal.

Further, developing treatments based on breaking up these clusters relies on the assumption that CTC clusters have greater metastatic potential than single CTCs, which is still up for debate.

“This study is a good first effort to help us understand how cells might transit through a simplified model of the circulatory system,” Cho wrote in an email, “but until we can model the true complexity of CTCs and CTC clusters traveling through the human circulatory system, we should be cautious not to extrapolate too much in terms of the potential therapeutic potential from the conclusions of studies like these.”

Correction (April 19): The reference at the end of this article initially misnamed the first author, and has been fixed. The Scientist regrets the errror.

Clarification (June 27): This article has been updated to note that the microfluidic channels used in this study were square. 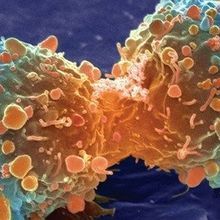