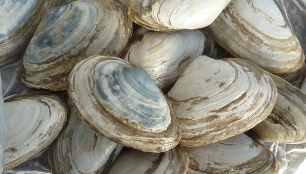 A fatal leukemia that decimates soft-shell clam (Mya arenaria) populations in the Atlantic may be caused by a contagious cancer cell line, according to results published today (April 9) in Cell. Stephen Goff of Columbia University in New York and his colleagues compared leukemic and healthy hemocytes, finding that clam cancer cells isolated from various locations along the East Coast shared mitochondrial DNA (mtDNA) and other genetic features, indicating a common origin.

Clams with this cancer show an overgrowth of abnormally shaped hemocytes, which convert the clear circulatory fluid of healthy animals to a milky-white color. Sickened animals die within weeks or months; neoplasia is one of several factors that can wipe out entire beds of clams.

Previous studies have suggested a virus might trigger this leukemia, but no specific infectious...

Testing leukemic clams collected from New York, Maine, and Canada’s Prince Edward Island, the researchers found a surprising similarity in the genomic integration sites of Steamer. Seven of 12 integration sites were common to clams from all locations, one was unique to Canadian samples, and four others were more common among the Maine and New York samples. Retrotransposons rarely show such specificity for parts of a host genome.

“Many of the [retro-]elements in many tumors from different geographic places were all identical,” said Goff. “That was bizarre. They usually hop [in genomes] with pretty low specificity, so you’ll find them scattered through the genome.”

These data suggested to the team that this form of clam leukemia may have originated from a single cancer cell, and then spread through populations along the coast.

“It’s a very compelling argument,” said Anne Boettger of West Chester University of Pennsylvania who was not involved with the work. “They have really interesting evidence to say that [horizontal spread] is possible.” Still, she noted, “in the past this particular disease has been attributed to specific viruses, so we can’t say that something else may or may not be involved.”

Ahmed Siah of the Center for Aquatic Health Sciences in British Columbia, Canada, said that much remains to be studied about the biology of hemocytes in soft-shell clams, making conclusive statements about this form of leukemia difficult. If confirmed to play a role in this form of clam cancer, the retrotransposon identified in this study could prove to be a handy diagnostic marker, added Siah, who was not involved with the study. “If we can conclusively demonstrate that this retrotransposon is linked to cancer in soft-shell clams in the field, we can then use these sequences [as diagnostic markers] in order to prevent outbreaks,” he said.

Whether caused by a virus or contagious cells, very few studies to date have demonstrated that the cancer can be spread among animals when sick and healthy clams share a tank. Other forms of neoplasia are known to occur in clams and other bivalves, such as oysters and mussels. Environmental contaminants or infectious agents may trigger such cancers, Goff suggested.

Boettger added that further work is needed to confirm whether these cancer cells are truly transmissible among clams.

The only other contagious cancers presently known spread by biting (in Tasmanian devils) or through sexual contact between dogs. Clams, however, remain sessile throughout their adult lives, suggesting that the cancer has an unusual mechanism of transmission. “We were surprised to have learned that there is even such an example in the marine environment,” said Goff. “Environmental factors might well increase transmission—either promoting release of the cells, or more likely the susceptibility of a clam to acquiring and becoming colonized by the cells.”

“So far, we are only seeing one clone of cells,” he added, “but we’re very curious to know if other new clones can also arise.”