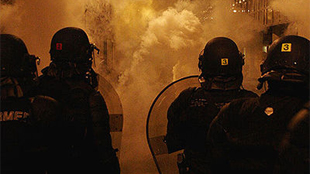 WIKIPEDIA, DAVID MONNIAUXIn the coming decades, the world’s changing climate could herald a rise in violence at every scale—from individuals to nations, from assault to war—according to a comprehensive new analysis of the link between climate and conflict.

Analyzing data from 60 earlier studies, Solomon Hsiang from the University of California, Berkeley, found that warmer temperatures and extremes in rainfall can substantially increase the risk of many types of conflict. For every standard deviation of change, levels of interpersonal violence, such as domestic violence or rape, rise by some 4 percent, while the frequency of intergroup conflict, from riots to civil wars, rise by 14 percent. Global temperatures are expected to rise by at least two standard deviations by 2050, with even bigger increases in the tropics.

“The paper is remarkably strong,” said Thomas Homer-Dixon, an environmental and political scientist at the University of Waterloo in Ontario,...

Hsiang, together with UC Berkeley colleagues Marshall Burke and Edward Miguel, focused only on studies that provided the strongest evidence for a causal connection. “The ideal thing would be to take two identical Earths, heat one up and watch how conflict evolves,” said Hsiang dryly. “We can’t do that, so we looked for these natural experiments.”

The researchers ignored any studies that compared levels of conflict between different countries, which also differ in their history, culture, and politics. Instead, they focused on data that revealed how violence rises and falls in a single place as climate changes.

For example, crime statistics in the United States reveal that the number of rapes, murders, or assaults increases on a hot day. Civil conflicts in the tropics become twice as frequent during the hot and dry years caused by El Niño events. Farmers in Brazil are more likely to invade each other’s land if they have a particularly wet or dry year. And Chinese dynasties all collapsed during long dry periods.

The team analyzed these studies and more using a common statistical framework to control for any biases on the part of the individual authors. Together, the data sets stretch back to 10,000 BC, and cover all major world regions. They represent the collective efforts of more than 190 researchers working across varied disciplines, from psychologists looking at the effects of temperature on aggressive behavior to archaeologists studying levels of violence in the ancient civilizations.

Despite this diversity, “we were shocked at how well the results from all these fields lined up,” said Hsiang. “Given how some people had been talking, we thought they’d be all over the map,” but the data consistently showed that temperature and rainfall affect violence, across locations, times and disciplines.

“This is a contested area and the convergence of results in this meta-analysis represents a significant step forward,” said Neil Adger, an environmental geographer at the University of Exeter, who was not involved in the study. He notes that responses to climate change, such as “widespread growing of biofuels or displacing populations to build dams” could exacerbate any increased propensity for conflict. “The impacts of climate change will factor large in the future, especially if the world is already fractured and unequal,” he said.

David Zhang, a geographer from the University of Hong Kong who was not involved in the study, said the results were robust and important. However, he noted that most of the data sets cover the last century, and the effects of climate on conflict, may have differed across centuries of human history. Hsiang acknowledges this gap, but said that a few century-spanning data sets have found similar trends.

“Another obvious criticism is that older societies may not be a good analogue for modern ones,” Hsiang added. For example, technological advances might help us to adapt to changing climate more effectively than past generations.

Hsiang also emphasized that climate is just one of many factors that influence the frequency of conflict, and that his study does not address why such a link between conflict and climate exists. Shifts in climate could change the availability of important resources like water or crops, leading to failing economies, weaker governments, and more incentives to fight or rebel. They could also lead to mass migration, rapid urbanization, or growing inequalities.

“We now want to understand what the underlying mechanisms are,” said Hsiang. “If we understand them, we could come up with policies that could decouple climate and conflict, which might help society to adapt. That’s a good reason to push the research ahead.”