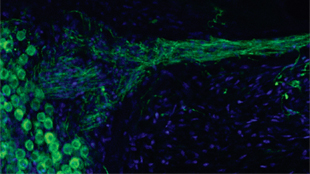 Cochlear nerve after gene therapyUNIVERSITY OF NEW SOUTH WALES, PINYON & HOUSLEYCochlear implants are among the most successful bionic devices ever developed. Available since the 1970s, they have restored some measure of hearing to more than 300,000 people around the world. Now, scientists from the University of New South Wales have found a way of making the implants even more effective—by turning them into delivery vehicles for genes that promote the growth of dying neurons in the ear. Their work appeared in Science Translational Medicine today (April 23).

Many people lose their hearing when the sound-sensitive hair cells in their cochleas die off. When this happens, the spiral ganglion neurons (SGNs), which send signals from the hair cells to the brain, also start to atrophy.

Cochlear implants stand in for the vanished hair cells and producing electric currents that stimulate the SGNs directly. But these shrunken neurons usually...

Jeremy Pinyon’s team has devised a solution. Before surgically adding a cochlear implant to guinea pigs, the scientists infused the surrounding cells with rings of DNA containing brain-derived neurotrophic factor (BDNF)—a gene that encourages neurons to grow. The implants then use small electrodes to deliver strong but brief electric bursts—just 1 pulse to 5 pulses, each 15 milliseconds long. These disrupt the membranes of nearby cells long enough for the DNA to enter. The cells express BDNF, and the once-atrophied SGNs grow toward them. “They pop out through little pores in the bone and migrate down very close to the electrodes,” said Gary Housley, who led the study. “That was really unexpected, but it helps a lot.”

“Using BDNF to grow spiral ganglion cell neurites toward electrodes is an old idea (yet still an important one), but the use of the electrode array to focus targeted gene therapy as described is highly innovative,” Jay Rubinstein from the University of Washington told The Scientist in an e-mail.

The team tested its technique on deaf guinea pigs and showed that the rodents’ SGNs regrew as predicted. They electrically stimulated these cells, and detected strong responses in the auditory brainstem—a region that receives signals from the SGNs. It took just half the current to get the same responses in the treated animals compared to untreated ones—a sign that their hearing had dramatically improved.

Housley said that using the implant itself to deliver gene therapy means that BDNF is only expressed at nearby cells, which draws regenerating neurons to the right place. The more common delivery method—using viral vectors—“won’t work, since the viruses go everywhere,” he said.

Several other groups have developed alternative ways of delivering BDNF to the cochlea, including capsules or arrays of nanoparticles that slowly release the gene. These methods have shown promise, but Housley suspects that, with a bit of development, his technique would ultimately be simpler. “You put the DNA into the cochlea before an implant, a surgeon inserts the array and puts an electrical pulse through, and the job’s done in five seconds,” he said.

But Stephen O’Leary from the University of Melbourne noted some possible drawbacks. “The method involves large voltages that are too high to be replicated in contemporary cochlear implants,” he explained in an e-mail. “The efficiency of the transfection looks good, but seems to last only a few weeks. This is a major issue for clinical translation. Short-term expression is unlikely to lead to lasting neural effects, and it is well known that once BDNF is withdrawn, neurons degenerate once again.”

Housley acknowledged these problems, but said he hopes that “once the cochlear implant is up and running for normal hearing, the ongoing electrical stimulation should maintain the regenerated fibres.” His team is now working to improve the technique, and hopes to test it in clinical trials within two years.