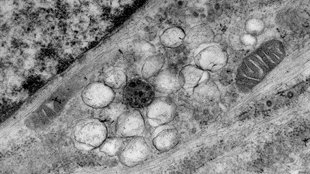 Coronavirus replication vesicles inside host cellVOLKER THIEL, EDWARD TRYBALA Coronaviruses, including the one responsible for the ongoing outbreak of Middle East respiratory syndrome (MERS), can be defeated in a dish by a molecule that destroys their replication vesicles, according to a paper published in PLOS Pathogens today (May 29). The molecule, called K22, is the first antiviral substance known to interfere with such vesicles, revealing them as a novel exploitable weak point in the coronavirus (CoV) life cycle.

“There’s no way to treat a virus with just one drug. You need to come at it from a couple of different angles, and this is a brand new fresh angle from which to attack a dangerous pathogen,” said Benjamin Neuman, a molecular virologist at the University of Reading in the U.K., who was not involved in the study. “And it seems to work on all the coronaviruses they tested,...

Until a decade ago, CoVs were not considered a significant threat to human health because the few that did infect humans caused non-life-threatening upper respiratory tract infections (essentially, colds). But then, in 2003, the SARS CoV emerged and killed nearly 10 percent of the people it infected. And the MERS-CoV that’s currently circulating the globe has been fatal for approximately 30 percent of infected individuals.

Edward Trybala at the University of Gothenburg in Sweden and Volker Thiel at the Institute of Virology and Immunology in Bern, Switzerland, have found a way to block MERS-CoV replication in human respiratory epithelial cells. Interestingly, their project began long before the current outbreak.

The collaborating teams were studying the life cycle of HCoV-229E, a CoV that causes cold symptoms. They had screened more than 16,000 molecules to find those that blocked the virus in human cells, identified one they called K22, and were ready to publish a paper. “And then MERS came,” said Thiel. “We thought, ‘Yes, if we have an inhibitor, it’s worth a try to test it’ . . . and it worked.” K22 also worked against every other CoV the team tested.

Having found an effective anti-CoV compound, the team then purposefully generated viral strains that were resistant to it—to figure out how the drug worked. The researchers gradually exposed HcoV-229E to increasing concentrations of K22 in cells until resistant variants emerged. These variants had amino acid substitutions in a protein called nsp6, which is responsible for assembling the specialized vesicles inside host cells, where CoVs replicate their RNA genomes. Indeed, in K22-treated cells infected with wild-type CoV, the vesicles were obliterated, while in treated cells infected with K22-resistant strains the vesicles remained, albeit at lower numbers than in untreated cells.

Generating the resistant strains was not easy, said Thiel, but that was a good thing. “That’s exciting because it argues that you’re targeting a highly conserved viral process that the virus may have a harder time finding its way around,” said Mark Denison, a professor of pediatrics and of microbiology and immunology at the Vanderbuilt University School of Medicine in Nashville, Tennessee.

The vesicles are “not a classical drug target,” said Theil, but are “obviously . . . a very vulnerable point in the lifecycle.” Other candidate anti-CoV drugs tend to target cell entry mechanisms or early protein processing steps, so combining K22 with such drugs might deliver the type of multiple-pronged attack required to combat MERS that Neuman suggested.

“[K22] holds promise as a new class of inhibitor,” said Denison. But Neuman noted that getting it into clinical trials might be an insurmountable financial obstacle “We’ve only had 600 or so people infected with MERS virus in the world and. . . 8,000 infected with SARS,” he said—which is likely not a large-enough patient population to lure drugmakers to invest in it.

However, there’s a chance MERS poses a longer-term threat than SARS did, and thus, a greater need for treatment, Thiel said. Furthermore, even if the rate of MERS-CoV infections does retreat, its emergence serves as a reminder that other deadly CoVs could readily arise. So having drugs in place to tackle such outbreaks makes sense, said Thiel.