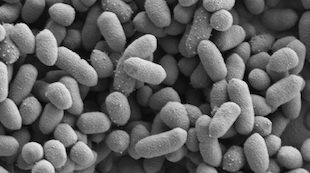 Mammalian hosts fight gut infections in part by releasing antimicrobial peptides that disrupt bacterial membranes. But it has been unclear how beneficial microbes survive the release of these peptides and maintain stable populations in the gut. One major group of commensal gut bacteria, the Bacteroidetes, avoids becoming collateral damage with just one gene, which encodes an enzyme that modifies lipopolysaccharides (LPS) in their cell membranes, according to a paper published today (January 8) in Science.

“Many aspects of the immune response target microbial features generally, not specific factors that only are found on pathogens,” said study coauthor Andy Goodman, an assistant professor in the department of microbial pathogenesis at Yale University School of Medicine. “We didn’t understand how you could have a host response that seems to be general but also commensal microbes showing this stability in the same...

“This work was done quite elegantly, identifying the specific genetic locus, what it does to the LPS, and how it mediates long-term stability and resilience,” said Sarkis Mazmanian, a microbiologist at Caltech who was not involved in the work. “This is clearly a nice mechanistic advance to our understanding of how gut microbes associate with tissue.”

Hoping to understand how the commensals were defending themselves, the researchers next randomly mutated the genes of five commensal Bacteroidetes at various loci and screened the bacteria for lost antimicrobial peptide resistance. While each bacterial species had multiple genes that aided in resisting antimicrobial peptides, only one resistance gene was shared across all five species.

The researchers named this gene lpxF because it closely resembled a phosphatase-encoding gene of the same name found in a few pathogens that are also resistant to antimicrobial peptides. The phosphatase LpxF clips off a negatively charged phosphate from the LPS that helps make up bacterial membranes. The shift in charge makes it more difficult for positively charged antimicrobial peptides to bind to the bacterial membrane and disrupt it. The phosphate is necessary while the cell membrane is being constructed but becomes superfluous when the bacterium has matured.

To investigate further, the researchers deleted lpxF in antimicrobial peptide-resistant bacteria and tested their resilience in mice with gut infections. They chose the species Bacteroides thetaiotaomicron because it is amenable to genetic manipulation. They then colonized germ-free mice with various B. thetaiotaomicron populations, some with deleted lpxF, some wild-type, and some whose lpxF had been deleted and then replaced. Subsequently, they infected the mice with the gut pathogen Citrobacter rodentium, inducing the release of antimicrobial peptides. The bacteria with deleted lpxF did fine in the absence of the gut pathogen, but were quickly outcompeted in infected mice. And chemical induction of antimicrobial peptide production showed similar effects. The researchers also saw that bacteria with functional lpxF outcompeted mutants in mice with more diverse sets of gut commensals.

Finally, the researchers harvested microbes from the fecal matter of 12 people and exposed the microbes to antimicrobial peptides, similarly finding that many commensal species survived exposure to antimicrobial peptides, while some members of the Proteobacteria phylum, which includes many pathogens, did not fare so well. While the researchers did most of their research with the model species B. thetaiotaomicron, they noted that all human-colonizing Bacteroidetes sequenced to date have versions of the lpxF gene.

Goodman was surprised to find a single enzyme that so thoroughly conferred bacterial resistance to antimicrobial peptides. “We had assumed that microbial host interaction was going to be so complicated that no single factor alone would do anything, and that’s not what we saw at all,” he said.

Further research will be necessary to show why a broad range of commensals, and not just Bacteroidetes, appear to be resistant to host defense mechanisms. And even Bacteroidetes likely have many methods of fighting off host defenses.

“This is identification of one enzyme that impacts one aspect of host-microbe interaction, and so we don’t in any way think this is the only example of this,” Goodman said. “Hopefully this study opens the door to a better understanding of other mechanisms that commensal microbes use to interact with pathogens and with the host.”