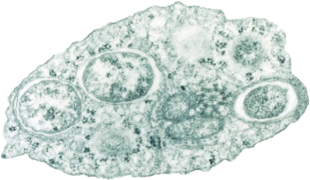 Transmission electron micrograph of Wolbachia within an insect cellPLOS BIOLOGY, SCOTT O'NEILLWolbachia bacteria live inside the cells of other species and can strongly influence the lives of their hosts. These bacteria manipulate host reproductive biology to increase their own transmission. Wolbachia have been documented in more than 40 percent of terrestrial arthropods.

Exactly how Wolbachia manage to manipulate a wide variety of hosts has puzzled scientists for decades. In a paper published in PNAS today (December 15), Sassan Asgari from the University of Queensland, Australia, and his colleagues propose a microRNA-mediated mechanism by which Wolbachia could achieve such “cross-kingdom communication.”

“This is one of the first instances showing how the bacteria are communicating with the host at a cellular level,” said Rhitoban Raychoudhury, an evolutionary geneticist at the Indian Institute of Science Education & Research Mohali who was not involved in the work.

So the team sought to evaluate whether other host species expressed these miRNAs. The researchers infected two strains of Drosophila, D. melanogaster and D. simulans, with two different Wolbachia strains. The infection pattern in Drosophila was similar to mosquitoes infected with Wolbachia: both miRNAs turned up in males and females, and were not expressed in non-infected cells. The group then conducted a sequence homology search among available Wolbachia sequences, finding that precursors to both miRNAs were conserved in most strains belonging to Wolbachia supergroup A.

“It is highly likely that other strains of Wolbachia produce miRNAs, but whether they are involved in the same function requires further investigation,” Asgari told The Scientist.

A simple Northern Blot revealed that the miRNAs were localized to tissues where mosquitoes are known to harbor Wolbachia, such as in the ovaries. The group then studied how the miRNAs interacted with the Wolbachia genome. Beginning with a list of candidate genes, the researchers homed in on the gene that codes for the enzyme UDP-N-acetylmuramoyalanine-D-glutamate ligase (murD), which had maximum sequence complementarity to WsnRNA-46 and WsnRNA-49. The researchers then used cloning to show that murD was in fact targeted by the Wolbachia miRNAs, resulting in a down-regulation of murD.

Might these miRNAs influence host gene expression? A bioinformatics screen turned up target genes in the A. aegypti genome that showed special complementarity with a part of the protein dynein. To ensure their own replication, Wolbachia have been shown to use the microtubule machinery of the host, in which dynein plays a critical role.

But Bryan Cullen, a molecular geneticist at Duke University, is skeptical of the role of Wolbachia miRNAs in host gene regulation. “This argument that miRNAs increase target gene expression—not repress—has no precedent,” he told The Scientist in an e-mail.

“The study is very intriguing, and opens up new mechanisms by which Wolbachia and other bacteria could manipulate or more generally interact with their hosts,” said evolutionary geneticist John Werren from the University of Rochester in New York. “I am not sure that I would call this ‘communication,’ however,” he added, as the authors have in their paper.

How Wolbachia interact with their various hosts remains a mystery. And miRNAs may be but one piece of this puzzle, the authors noted.

“Surely, this mechanism shown by the authors is a tantalizing glimpse on how Wolbachia gets about controlling host gene expression,” said Raychoudhury.