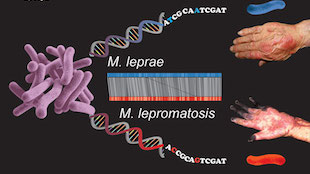 IMAGE COURTESY OF LUCIO VERA-CABRERAUntil recently, researchers believed that leprosy was caused by a single species of bacterium, Mycobacterium leprae. To the surprise of the leprosy research community, in 2008, a pathologist discovered an entirely new leprosy-causing species in the liver of a deceased man from Mexico. A new full genome sequence of the organism, M. lepromatosis, shows that despite having diverged 13.9 million years ago, the two leprosy-causing species are nevertheless remarkably similar, genetically. A team led by researchers from École Polytechnique Fédérale de Lausanne in Switzerland described the M. lepromatosis genome in PNAS this week (March 23).

“It appears, to me, to be a landmark paper which really provides a bounty of insight into this newly recognized and little-understood organism,” said Richard Truman, chief of the laboratory research branch at the National Hansen’s Disease (Leprosy) Program in Baton Rouge, Louisiana. Truman, who was not...

“It’s a really beautiful study,” said Xiang-Yang Han, the pathologist who discovered M. lepromatosis. Han, who analyzes patient samples at the MD Anderson Cancer Center in Houston, Texas, was not involved in the present study but said he has also sequenced the M. lepromatosis genome and hopes to publish a sequence soon. He noted that his results are consistent with those described in the new paper.

Sequencing the M. lepromatosis genome was no easy task. Both leprosy-causing species have lost large portions of their genomes and can only survive within host cells, so researchers can only isolate DNA from the bacteria from patient tissue samples. In infected human skin samples, 99 percent of isolated DNA is human.

Stewart Cole of École Polytechnique Fédérale and his colleagues overcame this problem by isolating M. lepromatosis DNA using an array of M. leprae DNA, separating out human DNA using human DNA as bait, and simply doing deep sequencing on all DNA isolated from tissues, and then carefully combing the data to separate bacterial and human DNA.

At approximately 3.27 million base pairs, the M. lepromatosis genome is comparable in size to the M. leprae genome. Protein-coding genes are 93 percent identical in sequence between the two species, while the sequence of pseudogenes is 82 percent the same. This suggests that evolutionary pressures have led the bacteria to remain remarkably similar to one another, even though the species likely diverged 13.9 million years ago, the researchers noted.

By comparing the sequences, the researchers also concluded that large portions of the leprosy-causing bacterial genomes lost their functions before the two species diverged. This suggests that the ancestor of the two species already caused leprosy, according to study coauthor Andrej Benjak, a scientist in Cole’s lab. “The ancestor evolved into an obligate intracellular organism, losing all the capabilities to survive outside the host,” Benjak wrote in an e-mail to The Scientist. “After the split, the two species still kept losing some genes, ‘fine tuning,’ but this is nothing compared to what happened to their ancestor.”

This likely explains why the species’ genome structures remained so similar over millions of years. Because the leprosy-causing bacteria had already developed to occupy a precise niche and lost certain genes necessary for independent survival, they could only continue to survive by continuing to use a single, specialized strategy, the researchers proposed.

The team did find some differences between the species. For example, M. lepromatosis has lost the ability to make some amino acids, while M. leprae has lost a gene necessary for producing heme, an iron-holding structure. The reasons for these differences are not yet clear. “We cannot grow these bacteria in the lab, so we cannot conduct genetic experiments,” explained Benjak.

In the limited number of M. lepromatosis cases analyzed so far, researchers have noted that the bacterium is associated with diffuse lepromatous leprosy, a form of the disease in which the bacteria widely infiltrate the skin and cause a spotted appearance. This form of the disease has long been associated with leprosy cases in western Mexico and the Caribbean. However, M. leprae can also cause these symptoms, so the researchers hope to examine more cases to fully characterize how the symptoms caused by the two species differ. It appears that M. lepromatosis is treatable by the same antibiotics used to treat M. leprae, the authors noted.

Having this sequence at the ready will make detection of M. lepromatosis easier, said Truman. “I don’t think we know exactly where [this organism] has come from, or how it evolved, but a paper like this provides a backbone from which hypotheses can be made and new investigations can be launched,” he said.